I had a dream about pressure canners last night.  Obviously I really need to make my decision and order the darn thing so I can sleep!  Still mulling over the choices, so here's an update on the "voices in my head" - I figure if I write it all down and get some feedback I can make my decision by this weekend!


Why a pressure canner?  I have been canning with a steam canner for awhile now and it's a huge pain in the @ss!  I can't use it on my cooktop, and it limits what I can preserve.  The pressure canner will preserve everything, and you know it's safe.  It's the safest method out there as well as giving you the longest possible preservation time.  Everything from fruits and veggies to soups, stews and meat can go in there.  Stroganoff, meatballs, you name it, if you can buy it in a can at the store, you can do it at home with this thing.I currently have a tiny chest freezer that is filled to the lid with frozen veggies.  Convenient and quick - yes, secure? - no.  We have frequent power outages due to storms and hurricanes so that's not the best way for us to preserve food.  The generator sucks massive amounts of fuel to keep it running, and won't do much good when the big one hits and the generator is flooded or has been stolen.  Much more cost effective to have it only run the water/well pump, that way we only have to run the generator for short periods for showers, etc.  The idea is to have a wide selection of foodstuffs available for us that don't need refrigeration.

Pressure Canner Thoughts...
Must have features -
1.  Be able to go on a glass cooktop.


Yes, I know there is a disclaimer on all of them that says they should never be used on one, but many people have done so, and I have found a specific few that have been using them on a Frigidaire, which is what I have.  Apparently the new cooktops are made stronger than the old ones from the 80's and such.  The problem here is the weight of the thing, plus the water that can cause damage.  It has been said that as long as it doesn't go over an inch in diameter more than the burner, it will be okay.


I also have a propane burner outside I can use, but I really want to get away from having to do that since it's not located anywhere near the kitchen, and some of you may remember my sliding hot jars incident 2 years ago from the commute to the burner.  I still have the scars.


On this note, apparently the control that cycles a glass cooktop on and off to prevent the glass from cracking does not affect pressure canners the way it does steam canners - steam canners are too large in diameter and also contain too much water to bring to a boil.  Pressure canners by nature of design come to temp faster and contain less water to heat.


Really, if the cooktop breaks.... I'll just replace it with an old coil style stove, which is what I should have bought in the first place LOL, this is my own fault from the get-go.


I don't want a pressure canner that relies on a dial gauge that has to be calibrated yearly.  Not only will I never get around to doing this, but I will constantly be worried about my canning efforts being "safe".


The weighted "jiggle" type is always reliable, and instead of standing there watching a dial for 90-100+ minutes, I can do other work in the kitchen and hear the jiggling and know it's working while I'm busy doing something else, like cleaning up tomato splatter off the walls and ceiling :)


While lovely to be able to have, I have to immediately discount the large pressure canners since they won't work on my glass cooktop, but the ones that hold a few quarts plus lots of pints will be sufficient, since I only use quarts for tomatoes, and tend to put all my pickles and peppers in pint size jars as they are easier for me to store as well as use up in a timely fashion after opening.


So that brings me to my choices...


After briefly looking at some of the off brand smaller pressure cooker/canner, it was quickly apparent they were not primarily designed for canning, and quality would be an issue, we're talking food safety and security here, people!


Leaving me with the Big 3:

1.  Presto - this is probably the most popular due to the nice sizes available and price.  These have been used for decades and people like them.  Price is great at $70 for the 16 qt model.  Although this has a dial gauge, there appears to also be a weighted gauge on the lid.  This one has the most presence on the web for people that report using in on glass cooktops successfully.

2.  Mirro - this is a nicer looking canner, feels a step up from the Presto in weight/thickness, and still has plenty of good reviews and tales of people still using them since the 70's, that's always nice to hear.  Price is fantastic at $66 for the 16 quart model.  Lots of great reviews, yet there are a few who say customer service is bad and replacement products such as gaskets are hard to come by, glass cooktop users report mixed results.  It does have the weighted type gauge and no dial. 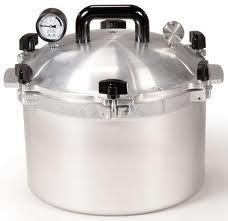 3.  All - American - looks alone will tell you this thing is made for the long haul, this model is the Big Kahuna.  It's made in America, and in Wisconsin no less so I'm even more apt to go for this one!  It's heavy, well made, metal to metal closure and lock uses no gasket so that's one less replacement part to buy.  It has both a weighted gauge and a visual pressure indicator.  It primarily uses the manual gauge to maintain pressure, meaning in theory the dial gauge doesn't need recalibrating.  The heavy issue could be a problem with my cooktop, but several users report success, including a few that have my identical cooktop.  This is the pressure canner for those of us that want to have it in case of "squirrel attack", or WTSHTF for you hard core types.  No replacement parts needed, and it's built to last and withstand the rigors of our military moves.  Not sure I would trust the thinner metal ones to be dependable after being tossed about by military move contractors.  Something to think about anyways.  Sounds like I already made my decision?  Well, the price for the 15.5 qt is $175.  That's a full $100 more than the others, and when you are a family on a limited income that's a huge chunk of change.


In summary, I'm thinking that the All - American is the way to go and I should find the money for this one.  It's made in America, the others are not.  It's built to last forever, period.  There is not one bad review out there unless you count people that can't lift it since it's so sturdy.  There are several reviews out there from more serious canner types that have had others and basically say "skip those and go straight to All-American".  I have learned in the past with 3 new appliances that have had to be replaced in our new kitchen, that it's often cheaper to go with the best from the get-go.  Jane, I know you have an All-American and love it, anyone else out there?  Any owners of the other models?  Mama Pea, have you decided yet?  I probably wouldn't entertain the notion of the expensive one if I was right out the starting gate with this garden thing, but by now it's obviously not a "don't worry, she'll get sick of it" type of a hobby for me.  To the contrary, it gets more out of hand every year. I can only imagine what it will be like when I actually move to a piece of property that isn't in the suburbs.  That also isn't and "if and when" idea, either.  We ARE moving as soon as hubby is out of the military, we have no ties here, cost of homes are cheaper back home, and we are completely "tied up" where we are headed, LOL- so I know this thing would get more usage with every year as our garden output increases.


I know many of you are thinking, are you crazy, go for the 23 quart!  For many of you, the larger sizes are probably better, and I wish I could do that.  Even if I upgrade to a larger size 10 years down the road, I see myself still getting lots of use out of this size, since there are many times of the year where I don't bring enough peppers, pickles, etc in to warrant more than 7 quarts or 15 pints, that's a lot of water to heat up.  I think the larger size would be nice to have when there are copious amounts of tomatoes and squashes to process, but that isn't an option on my cooktop, and I want to repeat that lugging everything out to the propane burner in 100 degree heat is not going to happen with me :)


As you can tell, I research everything to death, remember my sewing machine purchase LOL?  That's also one way I know if it's even an important purchase.  If I'm not sick of the whole idea by the time my research is done, then I know it's a worthwhile purchase.
Posted by Erin at 10:45