...if your bathtub and 1978 vanity is currenly residing in the front yard, can you tell we don't have an HOA? :) 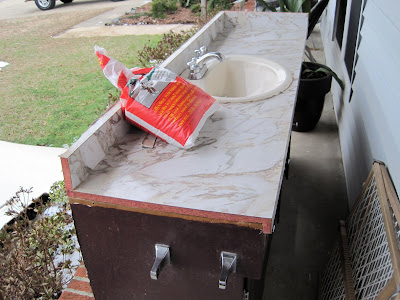 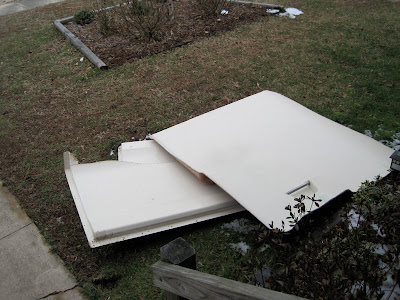 Bathroom reno is sloooow going due to my husband working 14 hour days and when he's home the weather is either snowing or icy rain, so all the cutting work keeps getting put off. He's not allowed to get sawdust all over my house this time!
And what's this? AGAIN?? 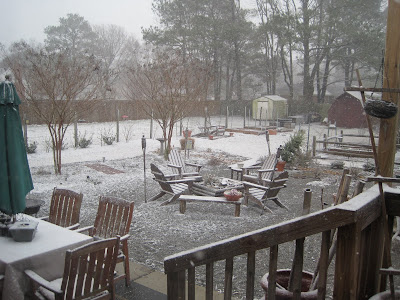 just 15 minutes later, it's coming down fast
My kids are already at school, so it will be interesting to see how the lovely city of Virginia Beach handles this one. Perhaps they will just keep the kids overnight for me? A busy mom can dream, can't I? (and for those of you up nort' wondering... yes, this is considered an emergency by Virginia Beach standards, lol! If this winter keeps up the way it has, maybe it won't be such a novelty next year. You should see our roads, they have been plowing with front end loaders with the teeth on the bucket :)!)
Posted by Erin at 09:37 8 comments:

Ok, Mystery Seed is solved: Red Velvet Celosia!
Now, back to the title of my post (yeah, here it comes, Kelly...you were right!)...
Today I checked on my seedlings and noticed yet again that the mystery seeds had red stems. I have only grown one thing with red stems, and I even remember saving seed from it, but couldn't remember what they looked like. Remember that I had 2 baggies with saved seed? One of them I had hastily labeled "Celosia" I think because of the fact that it had red petals mixed in with the seed in the baggie, so sure was I that I never compared the seed to the original seed packet. Just on a whim I actually opened the original packet today and voila!... the same seed. Duh... I can hear you now "Boooooo"....
But now this presents me with another dilemma: what the heck is in the baggie with the red flower petals mixed in???? See pictures below for close ups of my big dumb@$$ moment. 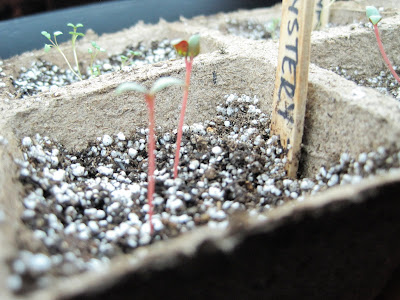 Red Velvet Celosia, not such a mystery after all! 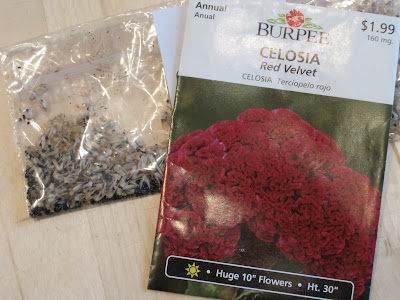 Seed saved matches identically to the packet if I had bothered to check inside! 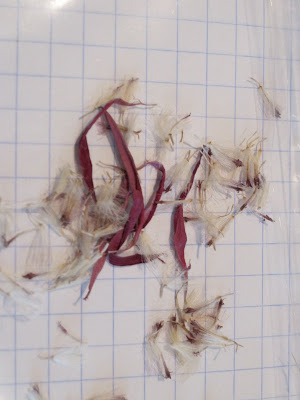 Now THIS is the mystery... I had the baggie labeled as Celosia and I think I did it simply because I was in a hurry and saw the red petals... So NOW WHAT?? Guess I will plant some in a flat tonight & reuse my Mystery Seed popsicle sticks, LOL!
On another plant related subject, I got suckered into this... 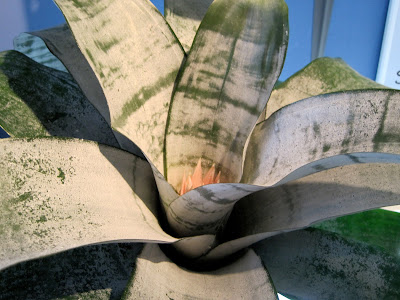 I always said I didn't like houseplants much, but from the looks of my random cuttings and small pots around the house and the fact that I now own a jar of rooting hormone seems to suggest otherwise. I guess I have to admit that I sorta-kinda like houseplants now...
Posted by Erin at 15:31 8 comments:

A must read post today from one of our fellow bloggers over at The Caffeinated Mom Gardens ... she does a great job reminding us all why we do this thing we call gardening!
Posted by Erin at 11:00 1 comment:

I have not fallen off the face of the earth, just been really busy! Hubby came home 3 days earlier than expected so that was a nice surprise for the kids. They were on another snow day so they were able to go with me down to the pier to pick him up. It always reminds me of the doors opening after school (on a massive scale) with everyone pouring out when the ship gets in, and it's funny watching the kids say "There he is!" 500-600 times, since they all look alike! 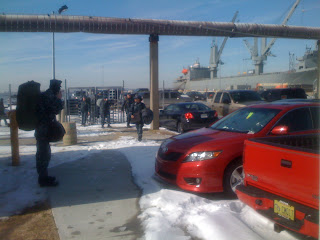 We spent one day just hanging out, went to dinner and did our bi-yearly stock up on socks & underwear for the kids and shoe shopping for mommy & daddy, yay! It sounds boring now that I am typing it, but it was kind of fun since we never do that kind of thing together, usually it's just me. Real "clothes shopping" is a rarity here, we detest malls. I haven't been to a mall in almost 2 years, and even that was just to get hubby's eyeglasses. I usually do my shopping either online at REI or at one of the local outdoor shops. You can tell I am not a clothes horse, I'm happy with a new pair of yoga pants or fleece top, LOL. Hubby couldn't find any shoes he liked that day but I got a new pair of those negative-heel rocker shoes. They are extremely ugly but are way comfortable and after walking in them all day cleaning house I felt like I had a workout! Now the trick is to remember not to walk in them out to the garden and get them all dirty! We also went to 2 local "real yarn stores", where hubby picked out some yarn and is crocheting a hat or something. I spent too much on yarn, but I will eventually use it. I'm still horrible at knitting, but I really like it!
We also went to a Habitat for Humanity store that was next door to the yarn store just to see what we could find. We now have a good source of old recycled windows if we ever get around to building a greenhouse! While we were excited over that, this is what Loch found and was excited about: 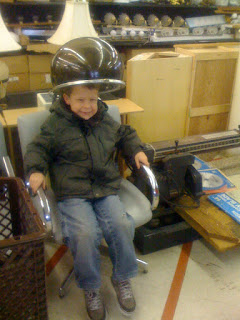 According to him "We NEED one of these, mom!" Apparently it's a space transporter of some kind. (He didn't believe me when I told him what it really was)
Not much happening on the seedling front. The Basil, Thyme, mystery seed, Artichoke and some Oriental Greens have sprouted, but most of the others say 15-25 days germination, and it appears they have every intention of sticking to that story!

Purple Romagna Artichoke
We heard a rumor that hubby's deployment is going to be moved back again, so we (I) decided that the bathroom needs to be remodeled NOW! It's the only room in the house that hasn't been stripped back to the studs and redone, and we have been waiting and waiting and waiting, since his schedule has not allowed it, and financially we were still recovering from the kitchen and the rest of the house (and kitchen in our rental next door!). I don't think the financial recovery is going to happen any time soon, but we are getting on with it despite! It bothers me that if we should have to sell due to a military move we will get talked down in price due to the 1978 bathroom that doesn't jive real well with the "Dwell" theme that's going on in the rest of the house, LOL. So on Saturday morning we went and bought our flooring and new toilet, and I ordered a full size shower unit that will replace the tub. I bought it online and ended up with free shipping and a discount and thus am only spending half of what it cost to special order it through a local big box store. Shipping is bonus, too, since the business is in D.C. it will be here in just 2-3 days. By Saturday afternoon, hubby was demo-ing the bathroom, good riddance, 1978! 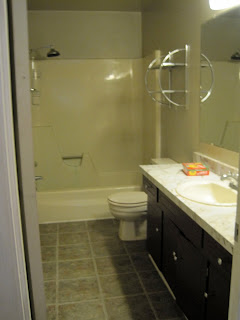 Here is is before the demo started 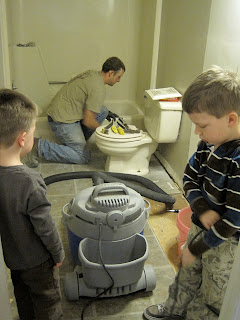 Kids "helping"
Of course by Saturday evening, hubby was ready to rip out the floor and start replacing the sub-floor, and wouldn't you know it, another snow storm! So his plans to set up the saw and all the other stuff he needs outside will have to wait (we don't have a garage!). It started out with freezing rain, then by 2 pm the snow was coming down fast and blowing 40 mph winds. 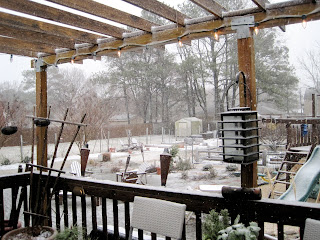 The snow had just about all melted from last weekend, but here it comes again! 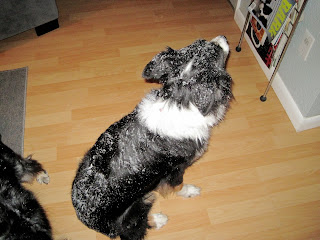 Marley after playing in the snow, I think her nostrils were packed full of it! 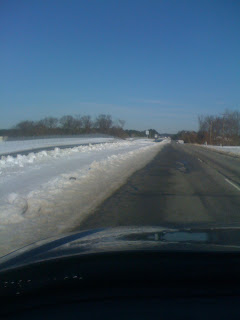 It struck me as I was driving down the section of road near our house how much it actually looks like I'm back home again! Very strange for our area.
Yesterday was a blur... late Saturday night Loch woke up sick. A stomach bug or some 24 hour virus, but he was vomiting all night which is really rare for him. So rare I think it scared him quite a bit. No fever, but just vomiting and tiredness. It was all gone by bedtime last night, but I stayed busy scrubbing everything in sight yesterday! Finn told me Loch was eating raw pizza dough Friday night as daddy was making pizzas, so that could be it, or it was just some quick virus. It's over now, thankfully! I went out and bought him a beanbag chair and called it "the sick room" since I wouldn't let him sit on the couch, is that mean? LOL
I expect to be pretty busy this week with the bathroom demo, baking Valentine's Day stuff for the kids' classes, and a trip to IKEA to get bathroom cabinets. I love IKEA, and buy just about everything there, but our IKEA is 3 hours away one direction up in D.C., so that's always a big trip that has to be perfectly planned out so I don't forget anything. I had planned to go this past Saturday, but the storm prevented me. I make the trip by myself so I don't have kids whining while I am trying to make sure I have all my cabinets and pieces, it's actually kind of relaxing spending 6 hours in the car by myself! And my husband LOVES that I go alone, since he never looks forward to any drive more than 20 minutes. I will try and keep updating at least with pics this week!
Posted by Erin at 09:24 5 comments: