Just when I thought I should probably get out there and plant something...

It's coming down hard, too!

Just finished loading the video and in the 4 minutes that took, the dog's tracks are already covered up out there.  I'm sure it will be gone by sunrise- for tonight though, it feels perfect for reading a good book!

Not really an excuse...

...but a reason that I haven't had as much time to blog and do crafty things so far this winter -

(faces are blurred out, but trust me they were all laughing as hard as Loch!) 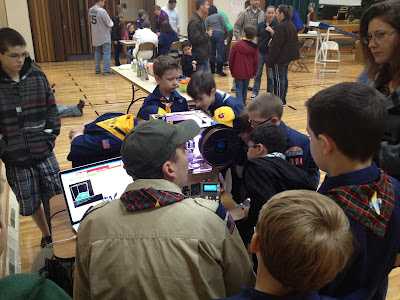 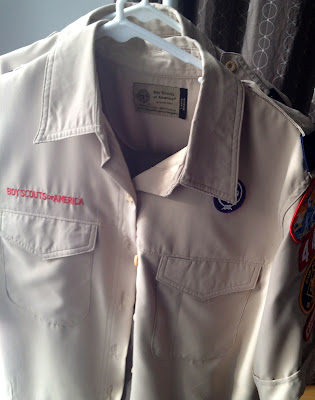 Yes, that's two Den Leader uniforms, one for me, one for hubby!  Are we crazy?  Maybe, but we are having fun, learning a lot, the boys are fantastic and let's face it, it was going to happen sooner or later.

I am finding out however, that it's really like a part time job, planning the Den Meetings so that those hungry minds and busy hands don't fall idle!  There is no end to their energy, I'm hoping I can soak up some of their excess.  Our den has 4 boys, 5 if you count Finn, since he always tags along and he's our honorary Cub this year.  He will be in the den with the other boys in less than a year.  He's kind of our mascot!

Here is Finn getting a feel for one of the squad cars when we toured one of the police precincts here.  He couldn't contain his excitement :) 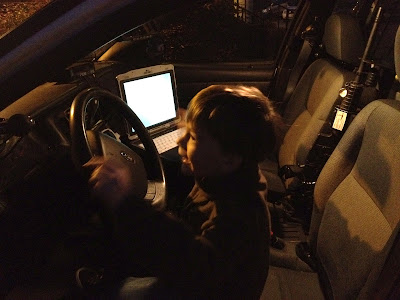 Dinner after... and haha I'm not in this photo! 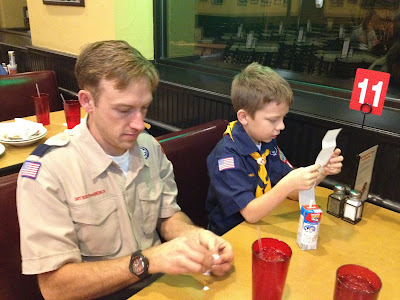 We just spent the past few weeks preparing for the Pinewood Derby.  This was the first time I had ever experienced a derby and it was a lot of fun watching the boys create their cars, they learned many skills and were so proud!  I think every one of our Cubs won at least one heat of the race, and they really did put their own work into the cars. 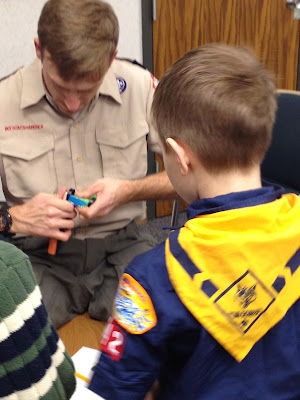 The lineup from many different packs... some were obviously made by 30 or 40-something "Cub Scouts"... 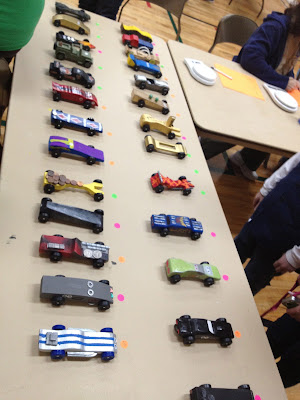 Like the Army Jeep, maybe - did the dad really think that would pass for something an 8 year old made? 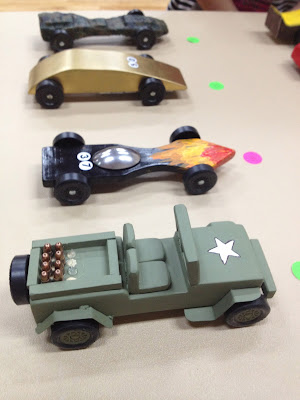 The Cubs voting for "Best in Show" 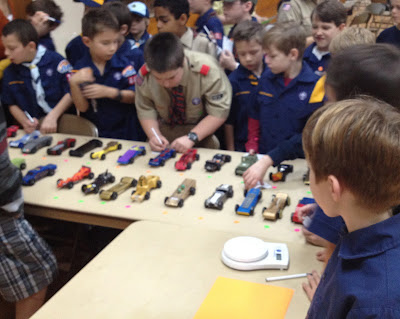 Here's one of the races Loch won, his car is the green one -

Sorry for those of you who only have girls or lack interest in this subject, but I know grandma wants to see photos, we have to keep her happy!

This brings me to my next dilemma.  With all the talk I do of being over scheduled and having no time for the things I love to do, I have been entertaining the idea of scrapping the Master Gardener thing.  I know it sounds crazy, since I'm a GARDENER, but honestly over the past year it has really put a lot of pressure on me with all the different projects and has actually drastically decreased the amount of time I get to spend in my own garden!  Maybe the time has come for my community service to center around my own little 1/4 acre "family-community"!  Growing food and growing boys is what we do in this house, so it would make sense to toss the Master Gardener stuff in favor of spending more time with my boys taking an active part in their lives and being able to have a little more breathing room for the things I'd love to do, like expanding the garden.  For those unfamiliar with the Master Gardener gig, it involves a lot of community service, working in the University trial gardens testing seed, visiting schools, growing plants for plant sales, etc.  All really awesome stuff, but when there are only so many hours in a day and you are attempting to grow and preserve the majority of your family's vegetable needs, there just isn't any time to work in your own garden!  So whaddaya think, am I crazy?  No one ever accused me of sanity before so I can take it...