I only thought the garden was done...

I lied, I thought the garden was done, kaput.  Then I remembered the other day that I asked hubby to leave the pepper bed alone since they were well behaved plants and weren't really infested with any sort of bugginess (is that a word?).  I've been up to other things inside the house and kind of forgot about checking up on them. 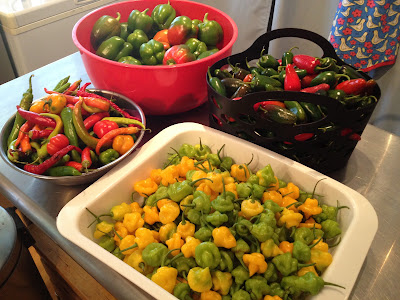 Nope, canning season wasn't over yet. 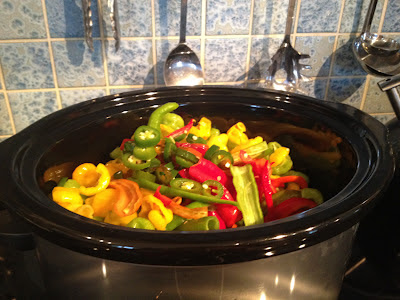 I also tried making hot sauce for the first time.  As usual, don't expect a recipe out of me, I don't use them.  I chucked a bunch of the mini-bell peppers that are a pain to freeze in the crock pot along with some jalapeños and a bunch of the yellow and green Trinidad Spice peppers you see in the photo above.  Added "a bit" of vinegar and a jar of last year's frozen tomatoes that were still in the freezer.  Cooked for several hours then blended with a stick blender, added salt and garlic, cooked a bit more and pressure canned a few pints along with a jar of fresh that we are using already.  Very yummy and now I'm thinking of making some of it into a bbq mop for our next pork smoking event, since the final sauce product flavor really hinted at it.  Not much of a recipe, but that's how I roll :) 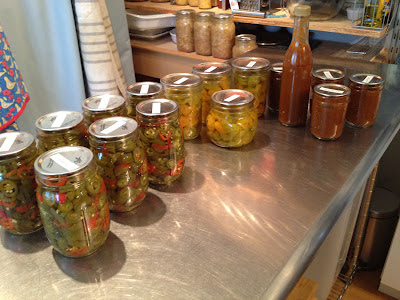 Although I'm not canning apples anymore, I still pick them up at the farm stand for fresh eating.  Finn is the apple connoisseur around here.  We all like them in some fashion, but for him it's a religious calling to sample every apple that passes by. 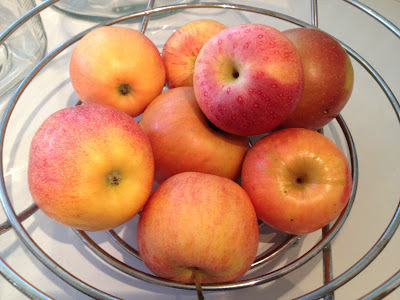 Above apples according to Finnegan:  "these are nice to look at, but taste gross"... there you have it.  These are Fuji I think, but I wouldn't judge any apple on this year's crop, apples have been dealt a difficult hand this year.

Speaking of bad crops, the pumpkin growers down here are calling it a total loss.  Crazy, the pumpkins look beautiful, but when you touch them or go to lift them, they collapse into a mess.  Too much rain.

So I've been avoiding the obvious, where the he(( have I been the past couple of weeks?!  I have no excuse for myself except motivation.  I have been busy with the kids's stuff, they have swim team, music lessons, Loch is in the Robotics Lego League, and of course we are Cub Scout leaders so that eats up a lot of time as well.  Of course none of this is a valid excuse for why I can't find 15-30 minutes to sit down and blog since you all do way more homestead-y chores and still manage to do it, I'm just a hot mess this year for some reason LOL.  Rest assured though, we are all alive and kicking and just waiting for the next wave of inspiration and industriousness to arrive.  Until then I'll continue cleaning up 2 square feet of the garden and losing interest or pulling all the stuff out of a cupboard to clean and then walking away from it with ADD  :)

There is a huge elephant who is not in the room yet, but can be heard wiping his feet off on the doormat outside... the deployment schedule has arrived.  Hubby leaves in just a couple of days and will only be home for 7 days over the next 2 months, after that we don't know how long he will be here before he leaves for 6-10 months.  We have heard this is the most condensed workup cycle that has been done, usually these training missions pre-deployment are a little more spaced out, but I guess we can thank the new crisis in the Middle East for that.  "New crisis" and "Middle East" should probably not ever go into the same sentence but I just did it LOL.  So anyway, now we aren't even sure if our holiday plans will be a go.  Oh well, I'm not afraid to say I can't stand Obama (military family, no big surprise there) but we will loyally "go with the program" and not complain too much, the deployment is needed and we've had him home for almost 2 years so we are fortunate.

Hubby took the boys camping last weekend!  I was home ALONE for a night!  I realized that I had never, ever been alone without any of them, how strange!  I'm not ashamed to say it was awesome.  :) 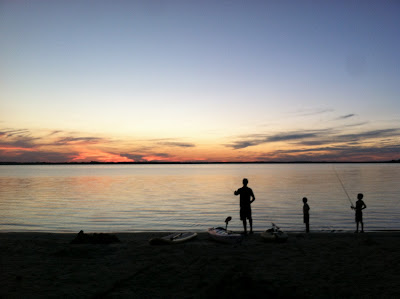 What was really cool was that apparently he did indeed feed them and keep them from harm's way, they came back the next day intact.  I had to save my "I told you that would happen" for another day...

p.s.  I have been trying to keep up with everyone and none of my comments are posting on blogs unless I'm on my desktop computer!  I usually read my blogs on the laptop so I apologize, I'm going to see if I can find the issue tonight.