Fun at the Farmer's Market

For the past 2 days, I've been working the Harvest Festival at the Farmers Market doing Master Gardener stuff. I can't imagine more perfect weather for it, it's been cool and crisp in the 50's in the morning, rising to about 68 in the afternoon, just perfect!
We had local 1st graders come on field trips to come through all the exhibits, I don't have pictures of everything since I was working, only the stuff where I was working but besides these pics they got to do hayrides, pick pumpkins and see 4-H animal exhibits. Even though I live here and my kids are in the school system here, it remains shocking the amount of classes & kids we have, since I grew up in a small farm town. We "ONLY" did about 8 schools in the past 2 days for a total of 800 first graders! Get ready for this... we have a total of 56 elementary schools in our district! I'm not sure how it is determined who gets to come to us for the festival, I am sure it involves a lottery or Title I designation or something. So here's some photos of the past few days:
This is the backside of our Farmers Market 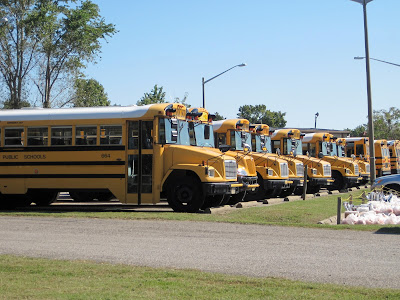 This is where they eat their bag lunches, they sit on hay bales and listen to a guy tell them about the journey of their food from the farm to their lunchbox. Their next stop from here was a tent where someone tells them about how food crops are used in packaging, what things can be recycled, and what ends up here in our bays polluting the water and seafood (LOL I think the parents are going to get an earful when the kids get home from school - good!) 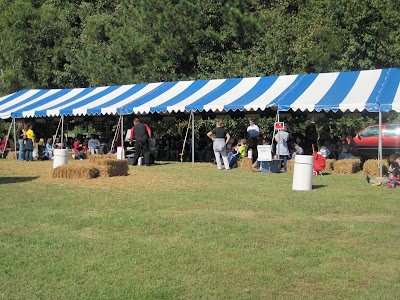 Ok, I can't get through this without telling you about the cute "Fish and Game Boy"...
He showed up in the morning and didn't know where he was supposed to be. Well, of course he asked our group, which just happens to be a group of women between the ages of 35-60.... well of course we told him he needed to set up right next to us! I coined the term "FishandGameBoy" for obvious reasons, he is Va Dept of Fish & Game and didn't look too many years (months!) out of college:)! We don't know his real name and it doesn't really matter, does it? So we watched him unpack his fishandgame "stuff" and took turns going over to ask him stupid questions about his taxidermied friends. I think this was obvious to him by that point that he walked right into our "trap" but I think he was pretty amused by it all and I'm sure his buddies will get an earful about the "hotflash" women this weekend hahaha! 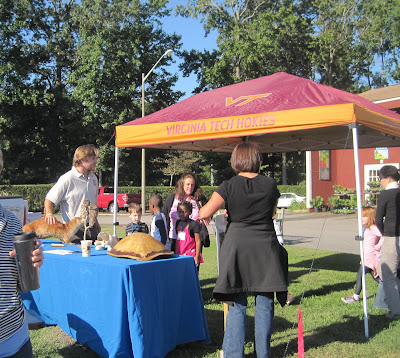 Fish and Game Boy was way more popular with the little boys who were more interested in the dead animals!
I walked over to take a picture of his owls and asked him what kind they were, a semi-intelligent question I thought... his answer was "geez, I don't even know, they just put them in my truck". I told them don't worry, they're just 1st graders, he had 10 minutes to figure it out and suggested that they were "Eastern Coastal Owls", he actually laughed at that and said that's what they'll be today, then LOL 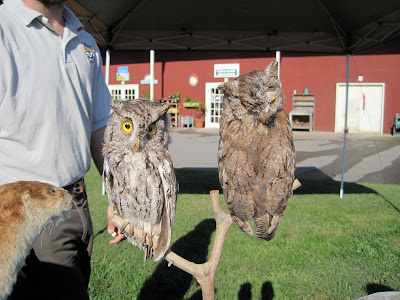 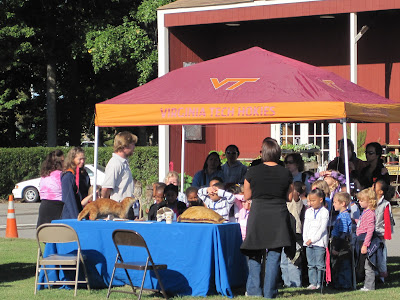 Below is part of the Master Gardener stuff, this is a craft activity table. Each class was about 25-30 kids and I don't know how teachers do this every day with this age group! I had PTSD after the first class for awhile, the ADD kids were jumping and yelling and then there were kids who couldn't keep their hands from touching all the other kids, the tactile-issue kids who freaked out when they got ink on their hands, the quiet OCD kids who couldn't seem to finish their project and move on.... oh my teachers should get paid MORE! I'm thinking more along the lines of astronaut pay. I mean hey, we don't depend on NASA astronauts for our daily life, but we depend on our nation's teachers to teach these kids to be productive, intelligent adults, and they sure do have their work cut out for them! 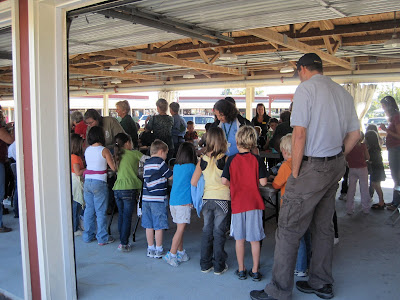 Below are the Tidewater Beekeepers, they are always my favorite! 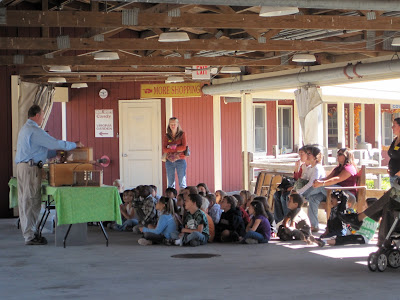 Here is the Master Gardeners' New Kitchen Garden, a year-round garden at the Farmers Market, all the harvest is donated to the food bank. Not sure how much will be left after all the kids got done tromping through, but it's worth it since many were completely amazed that food comes from there....wow..... 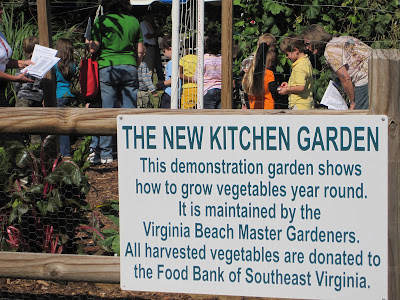 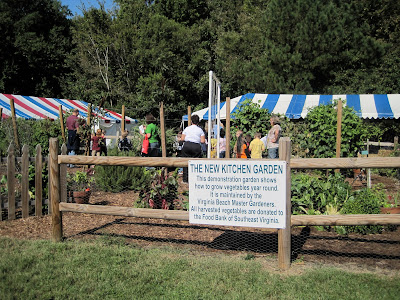 After we were done working both days, our lunch was provided by the butcher shop (yummy sandwiches and fresh bread!) and the Market restaurant (yummy N.C. pulled pork BBQ).
I warned my unnamed fellow MG friend that I just HAD to post this gem I overheard:
While we were in the butcher shop picking up our lunches, FishandGame Boy was standing next to MG friend and he said "I don't know what kind of chips to get"...
she replied "get the hot ones".... LMAO!
Finally, last night after I had recovered a bit, I took the kids back to the Farmers Market for their free Friday Night Hoedown. This is always fun as it truly is free, there aren't even any vendors open that time of night so I don't have to hear the kids whine for ice cream from the creamery! It's just a low key, bring your own lawn chair and cooler if you need one show. I sure wish I had more friends that enjoyed this kind of music, but we go as often as we can, and I think all the older people enjoy seeing the kids there. It's important to me that kids be exposed to regional music, growing up here they have no idea that mountain bluegrass is a regional thing, they'll thank me someday! At least hubby will be with us next year for it. They do this every Friday night all summer through Halloween. It's also known as a "jam spot" on Friday nights in the parking lot so you can also wander around and listen to others play, we had a tailgate show of 3 guys all on banjo about 80 years old each, parked right next to us! Anyway, here's a few minutes of the music last night:

ok, NOW I can start getting things accomplished by working in my OWN yard this week!
Posted by Erin at 11:12 14 comments:

Never worry about having a black thumb again!

This is a fantastic solution for those that never quite know when it's time to repot their plants or a good time to take cuttings for propagation! It's quite simple, really - when the time for repotting/cutting is detected, an alarm goes off (kind of resembles a crashing noise), the plant stand automatically comes down to ground level, ejects the plants and severs stems perfect for dipping in rooting hormone and propagating.
Figure 1: the budding horticulturist is automatically alerted to plants needing attention and potting soil clumps are naturally broken up and aerated 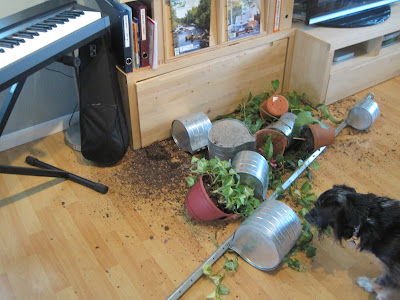 Figure 2: After repotting whole plants, take your pick of the stem cuttings, dip in hormone or water and propagate, the difficult work of scissor cuts is done for you 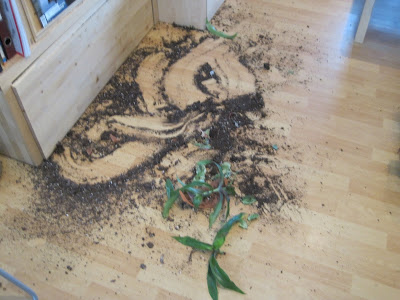 Figure 3: when plant maintenance is completed, place tower back in upright position and smile knowing the guesswork has been taken out and you will never again have to worry about "when" - the Automatic Plant Stand will worry about it for you! 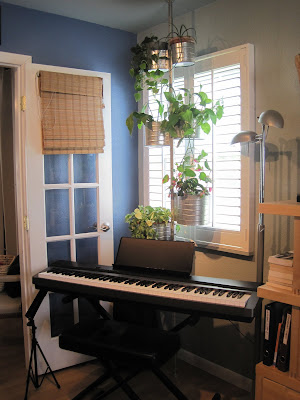 So it's STILL RAINING HERE! This brings our 7 day total to around 12-13 inches I think, 8 of which fell on one day setting a record. It's very cool here, in the upper 50's and lower 60's, which is a welcome change, but I sure wish the sun would come out, we haven't seen it since September 26th!
I am on the mend now thankfully, I have some leftover tiredness but anything else can just be attributed to the weather at this point! Here's some photos of the garden of destruction this week:
This is what happens when you call in sick to the garden for a week: 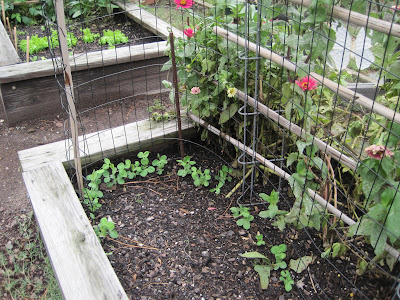 The peas are actually enjoying the cool, wet weather and have finally sprouted 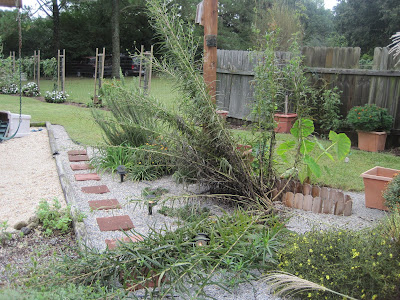 The "clump of dirt" I brought home and planted last fall - Maximillian Sunflowers! They were about 12 feet tall and covered with buds and the intense wind and rain knocked them flat and uprooted them - they were due to bloom in a week or so. I'll tie them up and stomp the dirt clump down and hope to see some flowers, if not we'll wait til next year again!
Below: Loch has been keeping busy with building balsa wood models while I've been sick. He asked for help but I have no patience for that stuff, especially with a headache and flu, and eventually he figured it out on his own. This thing had about 500 pieces! The past week he built a skeleton, airplane, and this ship, I'm pretty impressed - he gets this skill from daddy, definitely not me - I'd be the one lining them all up according to size, but never actually putting it together LOL 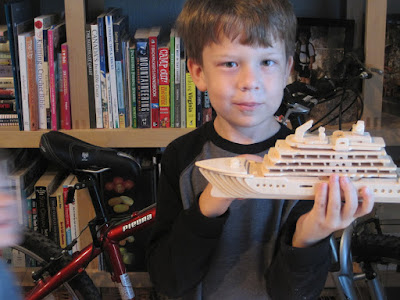 Here's one for you: I was out mowing the lawn during the 2 hours of slack in the drizzle on Saturday and the mail-woman came with a box. She went to the front door, talked to the kids and gave them a slip for an "undeliverable" box, "signature needed".... I WAS IN THE FRONT YARD!! Apparently she's too lazy to wave me to cut the mower, so now I have to drive to the post office and stand in line to pick up a box. Guess who's NOT getting a Christmas present in the mailbox this season? LOL....
I seem to be into the winter blog mode already, so rather than feel guilty, I'll just announce that I am backing off to less-than-daily posts, I need to concentrate on some fall chores like closet cleaning, knitting, desk cleaning, etc... all things I look forward to doing all summer and the time has come for me to get busy on my chore list that has been accumulating all summer!
Posted by Erin at 16:10 16 comments: