Wasting the day with Eggplant

If you are like me, you plant way too much eggplant.  Stunning to look at, not so much for eating here.  Yes, I do like a good batch of Baba Ganoush, but that doesn't use up much of it.  Well, if you have hours of time to devote (insert rolling of eyes here), there is always the big baked dish... 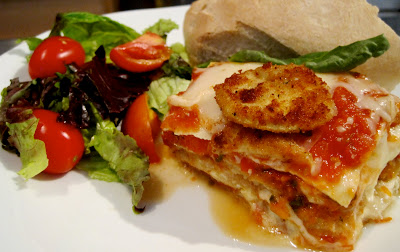 No, seriously... this took like 9 HOURS!  I had a really big harvest the morning after our visitors left, and it was another 115º day, so why not?!  I spent the better portion of the day making the sauce with the tomato harvest, not enough for a big canning batch, but was enough to make a big dinner.  After cooking down fresh sauce with lots of basil, oregano and other random additions, I tackled the eggplant -
First, slice your eggplant in whatever fashion you like, I had lots of it so I was wasteful and only sliced off the bottoms and sides with no seeds.  You then need to drain them.  I layered the slices with paper towels then weighted them down for with a heavy baking dish for several hours.
This is optional, but I dipped the slices in an egg wash & breadcrumbs, then lightly fried in olive oil. 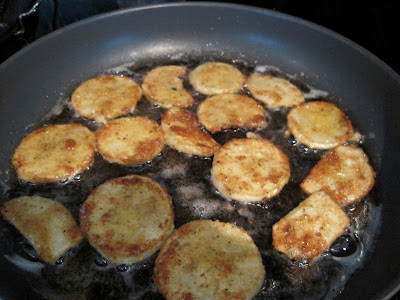 Below is all the "stuff".  Eggplant, sauce, ricotta, mozzarella, parmesan & noodles.  I use the no-bake flat noodles from Barilla, as they really work well and don't rip and slide around like the rippled ones do, and I had an awesome coupon that allowed me to stock up!  You could also omit the noodles completely if you wanted. 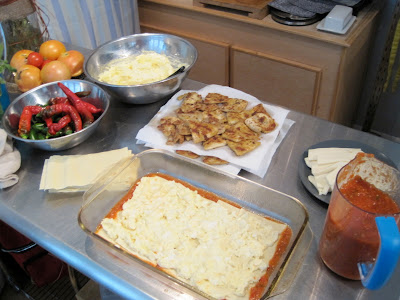 Below, layer in any fashion you like.  Hey nobody said this was low-fat, just fresh! 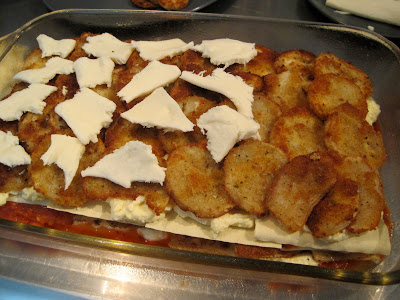 I place my baking dish on a cookie sheet in case things bubble over into a hot mess.  About 50 minutes at 350º under foil, then 10 minutes with foil off to brown the parmesan sprinkled on top.  Let it rest for about 20 minutes before slicing, that's the key to keeping the stacked appearance on the plate - and when you spend 9 hours on something, you want it to look sort of appetizing!  This is really filling so I was able to transfer half of the below pan to a freezer dish for another meal, and a few slices to a small leftover dish for hubby's work lunch. 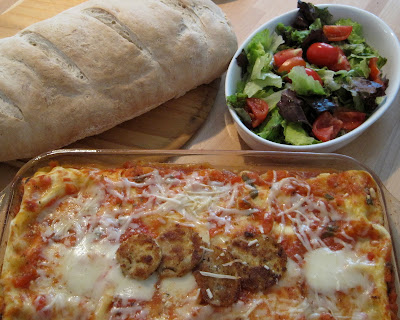 Serve up with homemade bread - you know, with all that spare time you have!  Of course, had it not been so hot outside, there would be no "spare time".  Big bonus, the kids ate it - they didn't actually see me peeling or slicing the eggplant so by the time they came in the kitchen it was fried already and I told them it was fried cheese :) 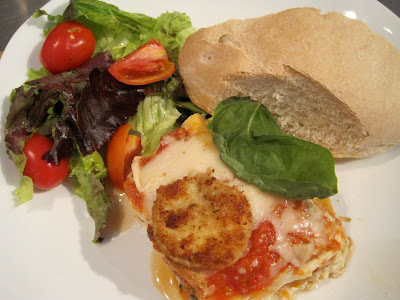 The rest of the harvest was preserved easily and quickly.  The bell pepper strips were frozen, and I made a quart jar of mixed veggie refrigerator pickles.  Below are Mini Bell Peppers, cuke slices, and long Sweet Peppers in a vinegar mixture with peppercorns, mustard seed & garlic cloves.  I still need to pickle the jalapenos today, but they will also be just a single jar of refrigerator pickles. 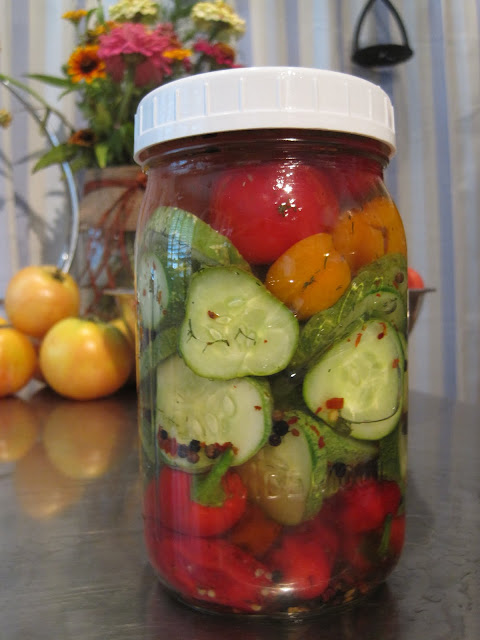 What are you doing to keep sane in the heat?  I'm thinking of abandoning the garden to its own devices, I seriously can't take it out there.  Today I'm really going to start cutting a pattern for an outfit for my niece, I've been wanting to do it for over a month.  Where do you think hubby went today?  The heat index is expected to be 110 again, we have 84% humidity and he left a little while ago with a friend to go on a little 30-mile bike ride!  Can't wait to see what he looks like when he gets home! :)
Posted by Erin at 08:20 20 comments:

My Hometown in the news!

My hometown was filmed today on CNBC, click on the link and you'll get a glimpse of why I love it so much, it's a gorgeous little Mississippi River town in MN, and we have weird donuts, too!

Main Street and the Debt Threat
Posted by Erin at 19:14 8 comments:

4 days with the family!

I have a lull while the harvest is cooking up in the kitchen, so here's the past few days' worth of photos, there's a lot!  Hubby's younger sister "L" and brother in law "M" arrived Saturday evening and stayed until last night, and it was so nice spending time with them, we don't get to see each other often enough with all parties having loaded work schedules and each of us living on opposite coasts.  They are expecting their first child in a few months, so it was really nice to see L pregnant and doing so well with it, she really looks great and appears that pregnancy really agrees with her!  We were hoping to be able to do a little canoeing or more beach visits, but with the daily temps in the 100's and humidity holding steady at 83%, the weather was not kind to us, so we were left with a lot of "what should we do"? questions that usually resulted in food, drink, or games!
Mama Pea wanted to see photos of food & drink, so here are a few of the dishes served up -
Pasta Salad with fresh tomatoes & feta 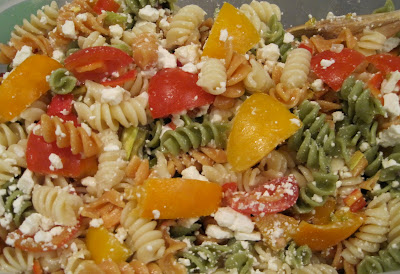 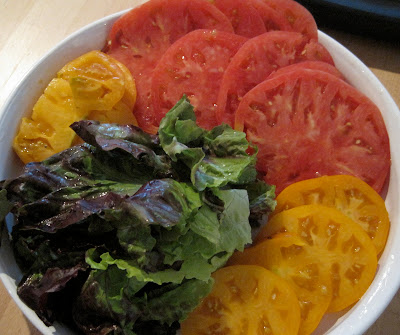 Lots of brews were sampled! 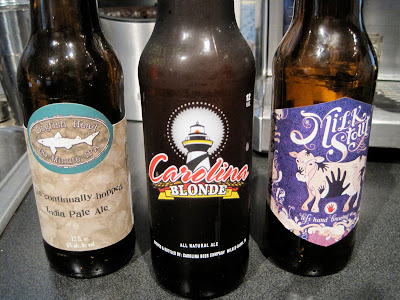 Hubby grilling one night, temp was 99 at 7 pm still! 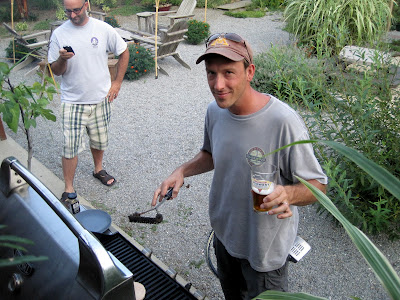 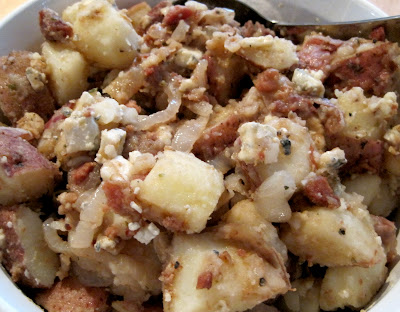 One of the kids took this one... 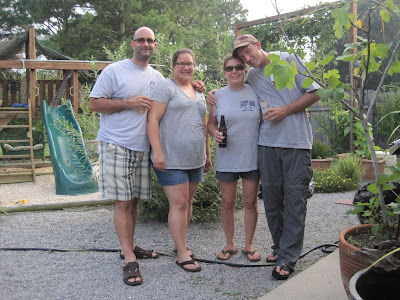 Nightly thunderstorms and heat meant for a lot of "hanging out" time.  There's actually a lot going on in the below photo:  Hubby & M are playing dice, I'm knitting and drinking beer LOL, and L and Finn are in the background playing a game of Battleship. 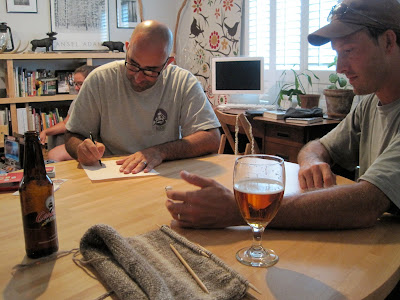 L (or "Tia" as the kids call her) and hubby are making date shakes with some of the fresh dates she brought with her from their home in the desert southwest. 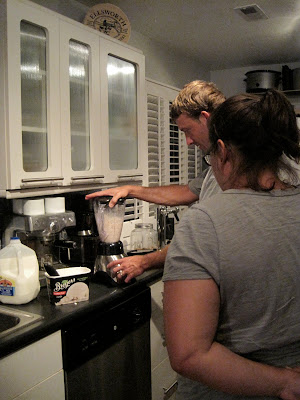 It would appear that all we did was eat LOL, but we managed to get out at least once a day somewhere in the heat.  It usually involved water of course.  We did an afternoon at the pool and one at the beach, even though the water was pretty warm, it was still refreshing compared to the air temps.  We also went down to the Oceanfront tourist area to just hang out and window shop - and eat ice cream of course!
Hubby's Wish Board - as in "wish I could afford this new board"... 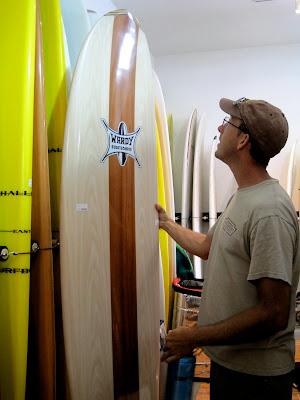 I promised some photos of our actual "Strip" at the Oceanfront, since I always post the quiet places here, but I'm lazy so I did a video of it:
Gotta love the junk shops at the beach... for those Hookah pipe and pocket knife emergencies! 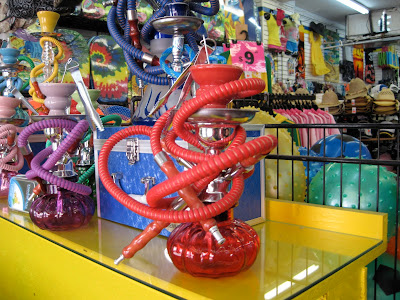 M giving his best "when in Rome" effort with redneck hat with pretend chew stuffed in the mouth :) 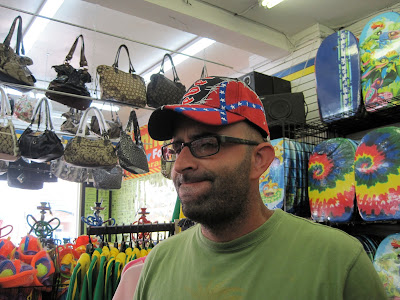 Minivan?  Who needs a minivan?!  If you come visit us we'll stuff you in the way back, too! 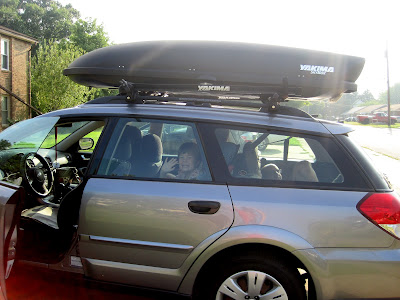 More food!  L's birthday dinner was awesome, who doesn't love Teppanyaki?  We had a blast there, and the kids will usually eat a few veggies when served up with such drama! 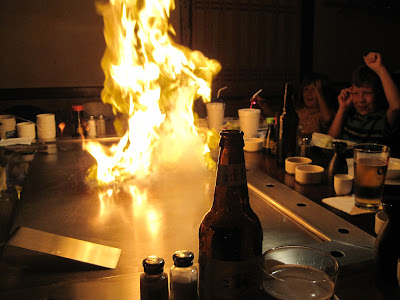 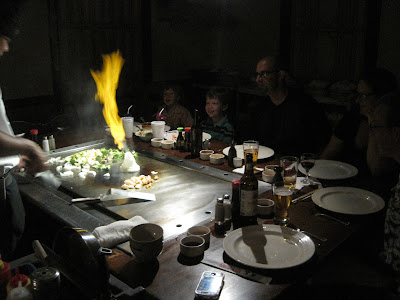 Poor L, having to dine with a blogger... here's a video of her getting "gonged in" to her next year, Happy Birthday!
More food, LOL... 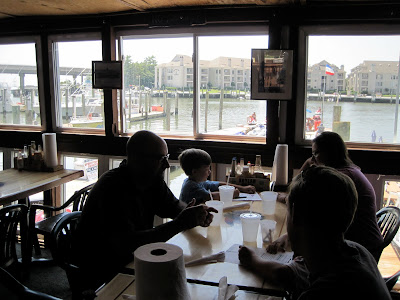 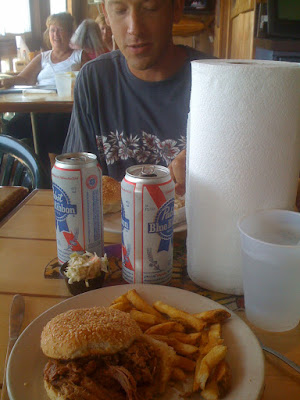 and Mama got a new pair of flip flops at the beach!  You should see the old ones, there's holes in the soles and you can just about see the pavement through them but I still can't bear to pitch them. 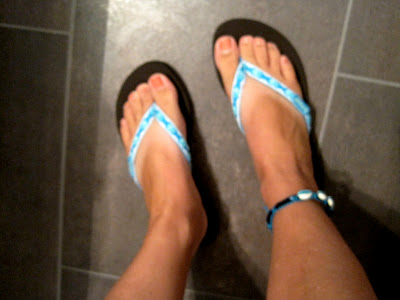 Now I have to work on fixing the old flip flop tan lines!
Brother & Sis in Law are headed off to his family in IL for the next few days, I sure hope the weather is a little better for them there, but they have some fun things planned and they are pretty good at taking the heat where they are from.  Sure was nice to see them, the kids were pretty upset to see them go so I guess it shows what a special aunt & uncle they have, of course all of them are pretty special :)  Know what I'm excited about?  Now I get to plan a baby quilt to make this fall!  I'm glad I have a few months, since I really enjoy the planning phase of quilting, probably more than the actual quiltmaking!
Back to the kitchen I go...
Posted by Erin at 16:30 17 comments:

What's a girl gotta do to get a day off around here? 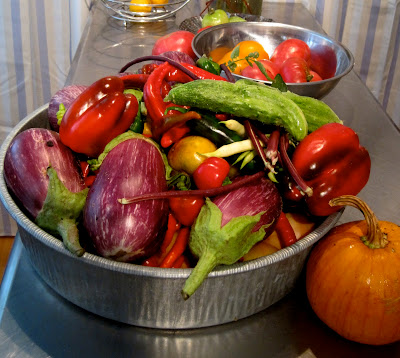 Don't get me wrong, this is a dumb thing to complain about, but when we're on the 2nd consecutive week of 1-teens heat indexes, 45 minutes in the garden catching up on the harvest is too long for comfort!
yes, that is a pumpkin... in July? 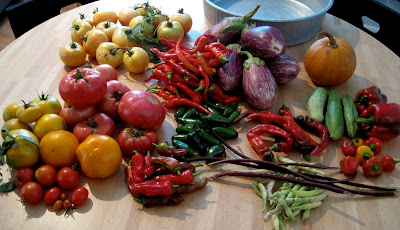 My mini-break is over.  I wanted to post about our time off with family, but the harvest has other plans for me today so I hope to be able to blog and catch up on everyone else's this evening!  ....So how are us gardeners ever supposed to have a "real" summer vacation?  Never mind, I know the answer LOL :)
Posted by Erin at 10:02 10 comments: