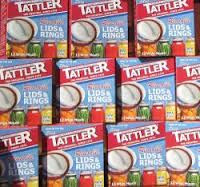 Then the time is now!  Just a quick announcement I received from a Facebook friend that Tattler is offering a Labor Day special right now 10-30% off and free shipping.  The best deal looks to be the variety pack at $52.95 total includes 3 dozen regular mouth & 3 dozen wide mouth including bands with free shipping.  The going rate on Amazon is $10.50 a dozen so this deal brings it to a more reasonable $8.83 per dozen.  If you notice you save a few bucks getting this variety pack over the individual boxes.  I'm finally taking the plunge - Happy Tattling y'all!

Can on, my friends! 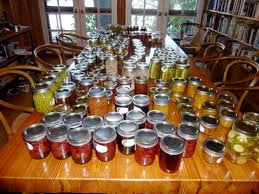 (not my photo, linked from Kelly canning, but it's awesome!)

What I haven't been doing...

Yikes, it's been 20 days since I've blogged.  Thank you to those that emailed me your concern, I'm perfectly fine, just completely mortified at blogging about what has been going on out in the garden!  Our weather has been just awful for a gardener, awful.  We have had rain for about 25 of the past 29 days of this month, and the humidity is unbelievably high whenever it's not pouring.  Nothing dries out, there is algae growing on the deck, even the city has given up making the place look nice for the tourists.  There is no good time to mow with the ground soaked so there are piles of wet grass all over the streets and it's just disgusting.  I hate grass.  The mosquitoes are insane, when I let the dogs back inside after being out for 5 minutes they are at the back door with 20 mosquitoes swarming around their fur, getting a visual yet?  Yuck.

So with that intro, I hope you won't be too shocked by what I'm about to show you - warning, these photos are disturbing! 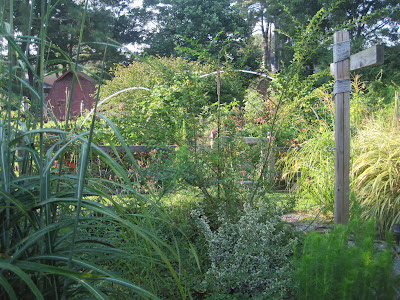 The one above is overgrown for sure, but not compared to this (cringe)! 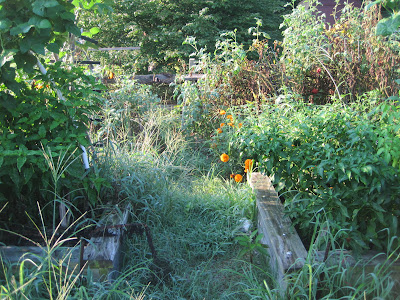 Are you still here or did you run screaming for the hills?  LOL, you would never know a "Master" (insert sarcasm) Gardener lives here.

Let's take a look at a previous year:

(this is last year, the same vantage point as above) 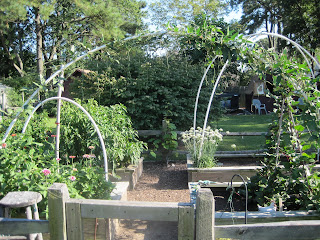 to quote Loch this year: "geez mom, what happened?" 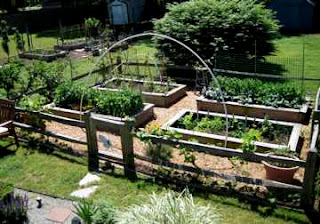 Whose garden is that?  I want to live there!  I heard someone say the other day "can't wait until the weather breaks"...what?  I think the weather has been broken all year!

Here's hubby on a rare night off contemplating actually going in there. 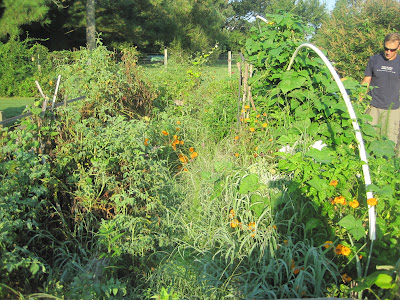 There are pathways in there.  You don't see them?  LOL, kind of like the word verifications these days, eh?

And he's in!  He tore out all the tomato plants for me along with whatever else besides peppers there was still in there.  I asked him to leave the peppers since I'm hoping to get one more canning day out of the jalapeños.  Too much rain is definitely worse than not enough here since everything is just rotting and downright gross.

There is an OAK TREE growing in the pepper bed, I kid you not. 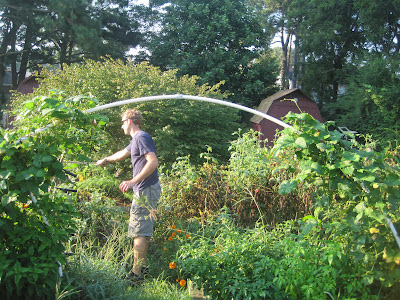 My lack of enthusiasm for keeping things neat and tidy this year has apparently extended to potatoes, who needs soil?  LOL 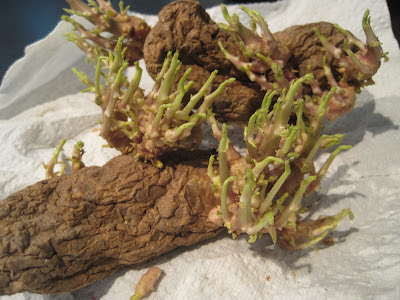 And look at my neighbor fixing what he hasn't been doing! 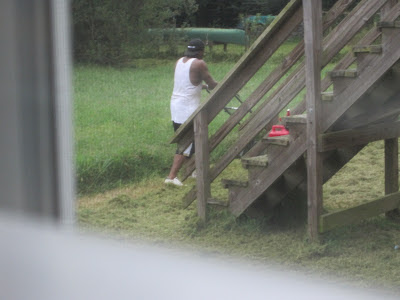 He's been through 3 lawnmowers in the past week trying to mow this - I'd be mad except that I've seen a few McMansion type neighborhoods that have given up on the wet grass too.  This is pretty insane though, even we were able to keep up with mowing - although we went through about 1000 gallons of DEET.

There has been an upside to all of this neglect however, I have been getting more actual cooking and canning done than in usual years.  In normal years where I actually take care to maintain the garden and have it look "pretty" I end up working outside so much that my harvest sometimes rots on the counter and has to be discarded.  With the awful heat and humidity this year I have been literally dashing out there for 5-10 minutes to collect (or forage, in my case!) what's ready and spending the rest of the day processing and not worrying about what it looks like.  Nobody is going out there to enjoy the steamy scenery anyway!  Make sense?  Well, that's the story I'm telling anyway.

Another major downer - I am supposed to be at the Minnesota State Fair today.

I didn't even mention on here that we were planning a vacation home because I had a feeling it would go down like this.  Hubby's leave request was denied at the last minute and instead of eating random stuff on a stick I am blogging about my mess.  The guy has 73 days of leave on the books.  That's essentially not having a day off in 2 years.  We haven't been home to see family since Christmas 2010.  Not for lack of trying, but the squadron says "they need him".  I'm waving the B.S. flag here, give me a break.  Meanwhile, the guys not doing the work are going on leave.  I love the Navy but come on, these guys that deploy constantly deserve to have a vacation at least yearly.  It's "use it or lose it" too, so it's not like someday he can just take 2 months off, but wouldn't that be nice?!  Deployment is coming up quickly for this winter, so his hours are insane now.  He averages 14-16 hour days and also working weekends now and will be in and out doing pre-deployment "workups" (trips to the desert for bombing practice or to the ship for carrier practice) from now until he leaves.  Most Navy spouses agree that this 6 month period before a deployment is the worst since they are not "deployed" so not getting deployment pay either, but are never here.  In and out, in and out - at least once the real deal gets underway, we can get a schedule together for our kids and have a new normal.  Oh well, I've done it more times than I can count so all I can say is "here we go"! 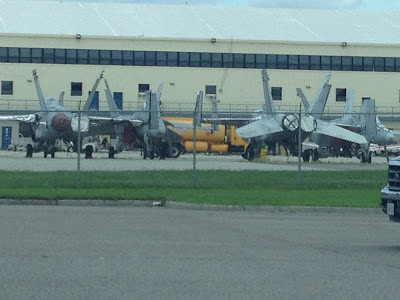 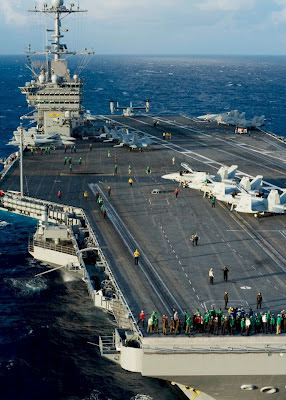 What the hey?  We went to go bring him dinner the other night and I realized these tourists get to see my husband more than we do LOL. 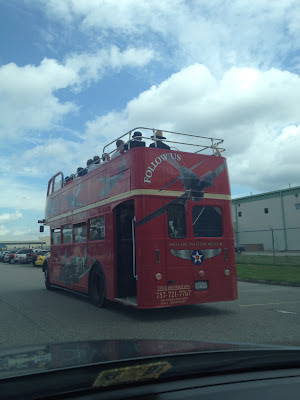 So there's the bad, in all it's soggy, wet, messy honesty.  I mostly want any new gardeners to know that you will have ups and downs, and this year has been an awful one.  Don't be discouraged by any tears brought on by this summer's beating, just chalk it up to another year of experience and hope for a better year next year.  That's what we are all doing, dealing with 2012 P.T.S.D.  :)

Thanks for hanging in there and not abandoning me on your Reader, I have just been kind of depressed and overwhelmed by the awful state of the garden and busy month and prefer to blog as a creative outlet when I'm feeling good - next post will concentrate on what I HAVE been doing, for a lighter fare!

And oh, MN/WI/IA friends - will someone please get over there and eat something on a stick for me asap?!
Posted by Erin at 15:38 39 comments: