It always comes back to the kids :)

All of a sudden it seems, the garden is spewing produce! 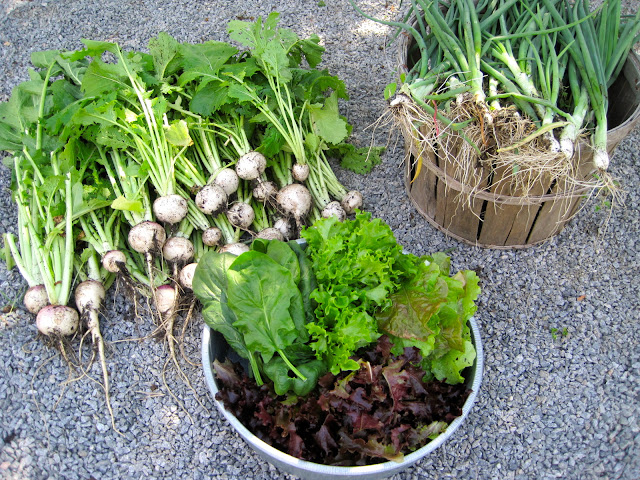 This came in really handy since it is Teacher Appreciation Week and I had no idea what I was going to give as gifts.  I'm terrible at remembering such things, my own anniversary and birthday included, so when the kids asked what they were giving their teachers, I had to act fast.

Worked out perfectly, walked out into the garden and was accosted with all this stuff and an hour later after weighing, washing and bagging it I was left with some pretty nice gifts.  Nice if you happen to like cheap gifts LOL!  I did include a little jar of homemade strawberry jam as well :) 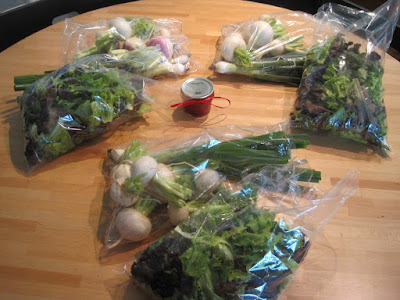 You are going to love this one - a family down the street is stealthily keeping 3 goats, 2 pigs, ducks AND a peacock in their backyard.  Yeah, looks like the time is ripe for me to get started doesn't it?  Anything I do will probably pale in comparison in the eyes of city code LOL.  Anyway... I went to have lunch with Finnegan at school and the little girl in that family is in his class and she saw the turnips I had with me for the teacher and said "my pigs like your turnips" and asked if I had any extra for her pigs.  Yes, she was about the cutest thing ever haha!  I told her to come over after school.  She showed up at the door promptly at 3 pm and Finn and his buddy from next door helped her carry all those insect chewed turnip greens with some rogue misshapen ones down the street.

How cute is this? 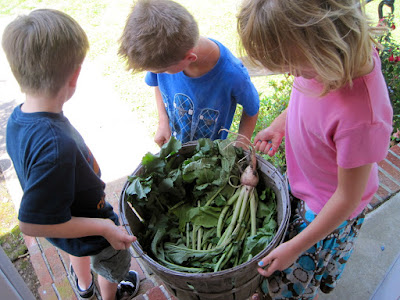 I sent Finnegan with my camera down the street with instructions to take pics for the blog, here's what came back, a little close-up I'd say... 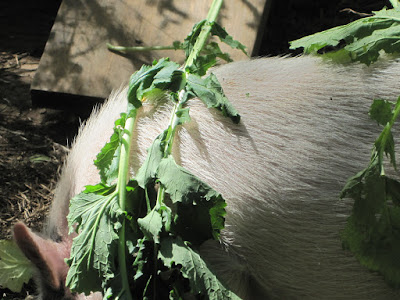 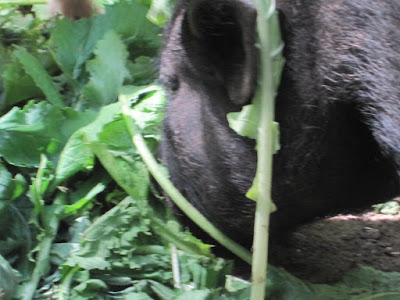 Loch had his own project going on at his after-school Garden Club, after doing some maintenance and weeding they had time to whip up some homemade insect repellent.  I think he said it has witch hazel, citronella oil, and "some other stuff". 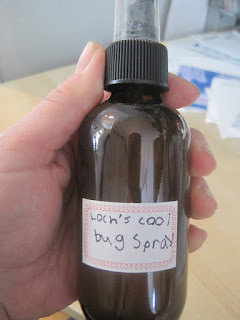 This sort of relates to the kids as well, since I am so busy running around lately for them that we have no time to eat decently, so I spent a solid 3 hours or so making up some freezer meals.  Seems a pain to be inside cooking when it's so nice outside, but it will be worth it for a no stress dinners. 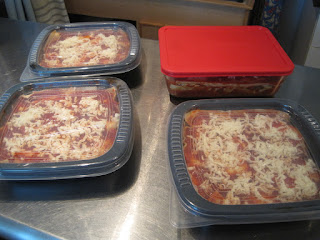 Chicken Enchiladas, one of the kids' favorites! 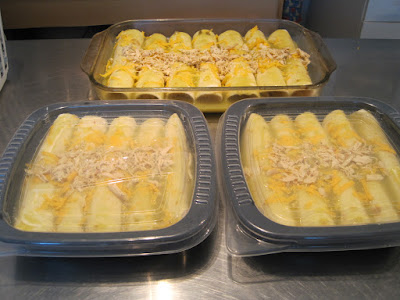 We had to have one pan right away last night :) 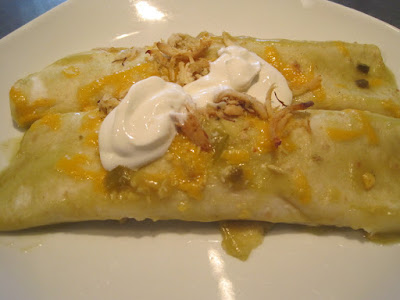 P.S.:  Finn said the other day "I petted goats and played with pigs, am I in trouble?" Bahahaha, my only requirement is that he washes his hands when he comes home - jeez, what kind of mama does he think he has?  Did he really think I'd get mad for "playing with pigs"?!!

Surprised by Jimmy Nardello in the garden this morning! 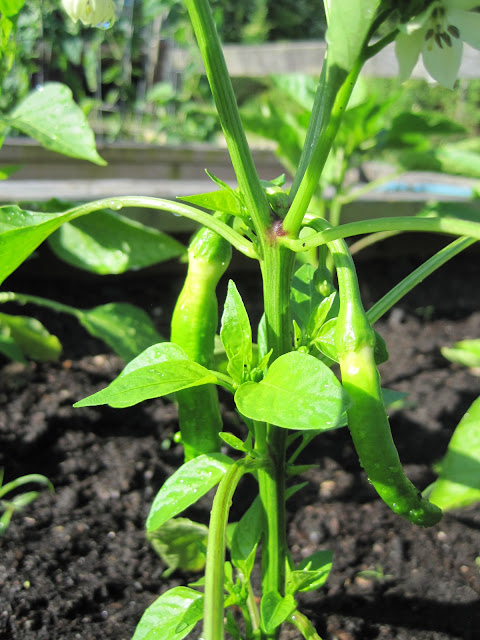 Peppers before beans this year?  I'll be shaking my head for awhile on this one! 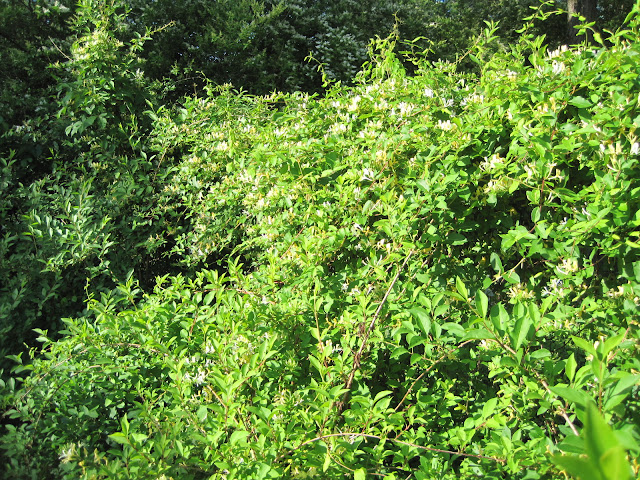 It has sure felt like August the past week.  Not including today, which was low 70's and perfect, the past week has seen highs around 90º with super humidity, yuck!  There has been a heavy, damp scent of honeysuckle in the air for days and mosquitoes, exactly August conditions! 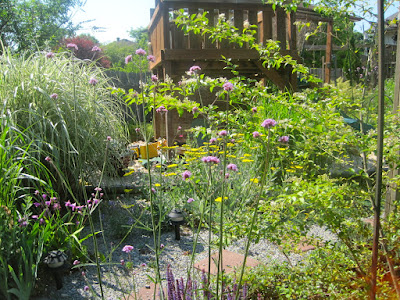 I counted at least 30 butterflies just in the gravel perennial beds today. 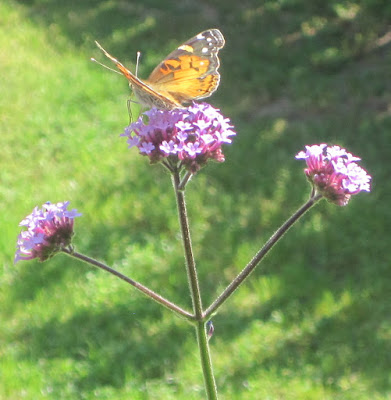 Can't you just almost smell the honeysuckle?  It's growing all over that dark corner of the yard in the below photo.  I wish I liked it more, but that's the far end of the scale for me on what my nose can stand.  I know, I'm weird - if I smell lilacs I get an instant migraine and run for the hills :)  Thankfully they are pretty rare here, they like a colder climate. 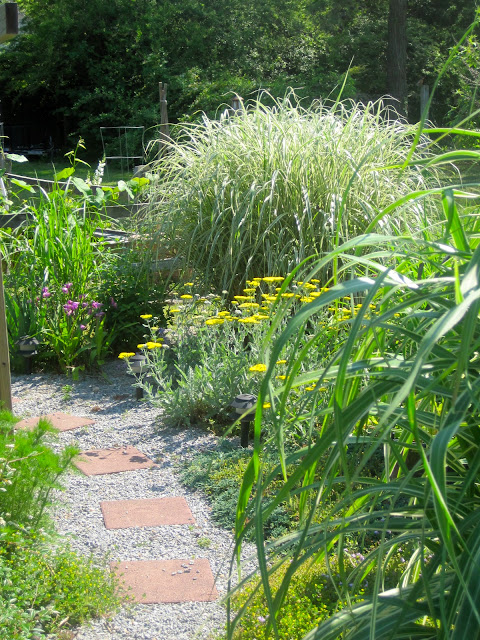 ...and a belated Happy Cinco deMayo to you! 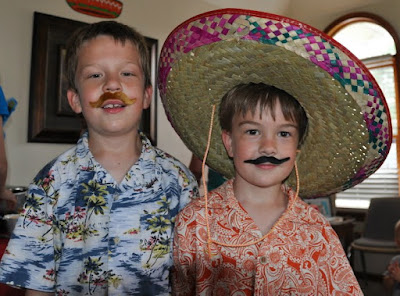 I'm officially going to stop apologizing for being such a lazy blogger lately, I've been in the schools again and will be for the rest of the month and have had so many things on my to-do list I think I'll just have to say this is going to be "one of those years" and do my best to blog when I get the chance.

I'm officially on "bean watch" now... my seedlings are all up about an inch high and Mockers the mockingbird is doing all she can as usual to thwart my bean growing efforts.  She is quite the character, but I'm on to her after all these years.  I'm going to kill her with kindness and try to get her to eat mealworms out of my hand this week, wish me luck LOL!  Now where's my helmet and leather gloves? :)