Finally! It's 50 degrees here today, sun is shining, and tonight looks as though it may be the last night for the low to go below 32 degrees. So I won't be posting til early next week, I'm working in the garden, yay! So far today, brush and perennials cut back, burn barrel going, BBQ got cleaned, and peas are soaking! Tonight we'll brew some Ale around the campfire, BBQ, and tomorrow we plant peas and set up the potato cages. Hope you all are having productive weekends too!
Posted by Erin at 16:52 13 comments:

I heard the wind howling all night and fell asleep to sleet, but then woke up to snow, yet again! I posted on my Facebook page yesterday that I was sick of the cold winter we were having and my brother replied "You should move back to Minnesota where the winters are milder".... I got a good laugh from that one!
The good news? Even though it was coming down fast and thick at 6:00 am, there was no call from the school and no closing on the news! It appears the City of Virginia Beach has accepted their fate in the climate change and are just going to roll with it now... I am very, very proud of them!
More good news - the forecast for next week shows temps in the 60's... you know where I'll be this weekend - in bed! The outside beds, that is! Now I'm off to rearrange and repot seedlings, hope to update on that finally later today.
Posted by Erin at 08:28 7 comments:

Here we go again... another Nor'easter expected in this afternoon to dump copious amounts of rain and snow on our area! I know there are alot of you dealing with the same weather system headed my way, I hope your garden braves the storm well. I will be busy this afternoon tying down the entire yard with 550 cord so we don't blow away, so in lieu of a seedling update, I leave you with this inspirational photo from last Spring:
Seedlings spending their days hardening off! 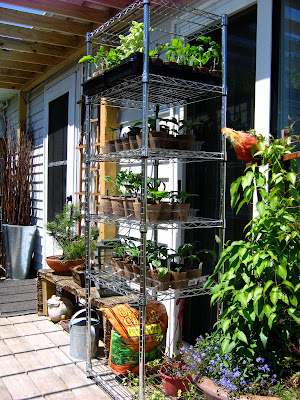 Don't worry, the weather will stop this relentless assault on us and we will see this soon I hope! Time to batten down the hatches yet again...
Posted by Erin at 10:14 5 comments:

We had a birthday over the weekend - Lochlann turned "7"! And of course, with that came another one of my (in)famous cakes, lol! Yep, I am horrible at cake decorating and so I gave up after his 1st birthday and now anything that sprinkles stitck to qualifies as birthday cake in my house. Mom, you'll like this one: I even wiped the candles off to save for the next birthday! 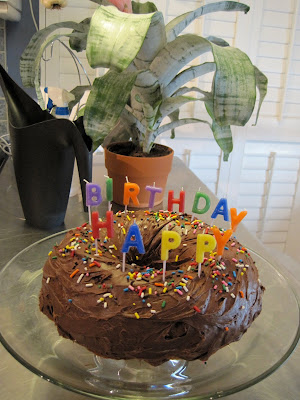 A huge event transpired last Thursday afternoon: I KILLED CABLE TV!!! Some of you may remember me debating this last year, but I finally did it! I did it while the kids were at school and hubby was at work, so I figured I would get the blank stares when they all came home, but I was pleasantly surprised. Finnegan simply shrugged, walked into his room and got his video game out. When Loch got home an hour later he said "What happened to Sponge Bob?", and I told him that Sponge Bob was banned from TV because the government thought it was a horrible show. Whatever, it worked! 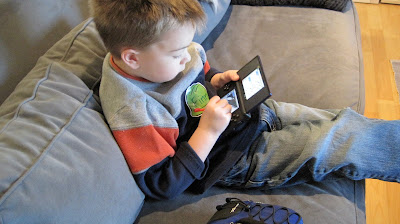 Finn not watching TV, although this is just as bad...
A video of my TV minus the cable box!
I was prepared to do battle with Cox Cable over the phone, but they were very pleasant. The fact that I increased my internet speed from them at the same time may have had something to do with it. I first started thinking seriously about this again 2 weeks ago when I checked out the prices and promos on satellite TV. I realized though, that I don't have to cancel cable and hook up satellite on the same day! So we are going to live this way for awhile and see how it goes. The past 5 days has been a breeze, though. The only thing I liked about the cable was the DVR, but so far I don't miss that, either. We have just been watching shows on HULU or on the network websites from the laptop. I've had Apple TV for a few years so maybe we will hack that so we can transmit HULU or similar right to the TV. In the meantime, we have about 17 channels, some are home shopping though. We do have all the major local networks in HD, along with several PBS channels from VA and NC, and there is still a PBS Kids channel for appropriate cartoons - all this comes just from an over-the-air HD antenna bought cheaply a few years ago. I found it amusing also that I found several websites and blogs that are devoted to cancelling cable and helping people "kick the addiction" LOL.
So that's one more check on the list of trying to live within our means and at the same time we are finding more time for hobbies and reading and not so concerned about the time on the clock that was always blinking at us, lol! Whatever will I do without Celebrity Rehab and The Bachelor? I'm KIDDING!
Back to the seedlings this afternoon, more to come on that tomorrow.
Posted by Erin at 11:56 10 comments: