How the U.S. Navy saved my shallots!

You know how some women hang on to their pre-pregnancy clothes even though they will never fit properly again? It's kind of like proof that we were indeed svelte and hip - "back in the day"! Well, this is also true with veterans. We can't seem to get rid of our uniforms and all accoutrement no matter how many times we stumble upon them over the years in the course of spring cleanings. I have been lugging around 2 seabags full of Navy uniforms ever since I got out over 10 years ago! Now it's like proof to my kids that I was somebody before them, lol! (For those of you who don't know, I was an OTA, Ocean Systems Technician - big word for someone who detects, classifies, and tracks foreign submarines). So on to the shallots - I live in VA, where no one has basements, so I am trying to figure out how to store my shallots so they won't rot. After much thought (I don't have pantyhose or old onion bags to reuse) I came across said seabags in the closet. When I opened the first one, there on top was my answer - Ditty Bags! No, that's not dirty bags, but ditty bags! They are intended for laundry or storing things, and even though I have never used them I seem to have copious amounts of them stored in with my uniforms. The perfect solution - they are made of mesh, and you can launder them for reuse! Who would have thought my Navy service would have come in handy for gardening, lol!?
Here's the shallots with the tops cut off ready for storage 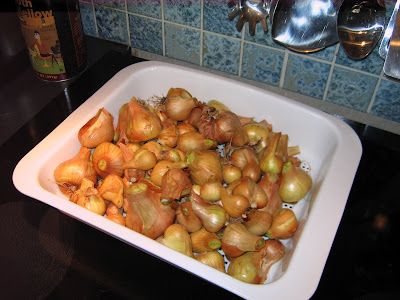 ...and here's a "Ditty Bag" with a new life storing shallots! 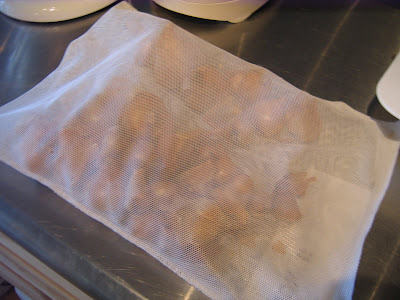 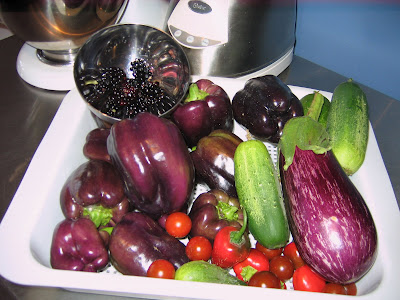 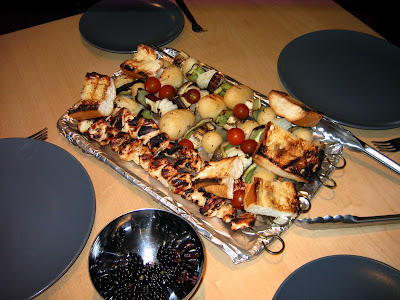 On to new exciting stuff: I got a new scale, and it is a sexy one at that! Can a scale be sexy, you ask? Well, just look....! It is cordless, and has a temp probe that can be plugged into it! Even gardeners can get giddy over tech-y stuff! This scale is "all that - and a bag of shallots"! So much for gardening to save money...this was one of those "I have to have that" moments! 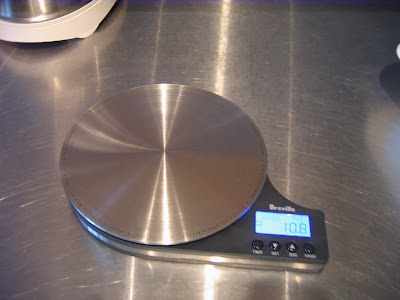 On a walkthrough of the garden yesterday, I snapped some pics of things growing now. This is the Hokkaido Heirloom Squash and Cucumber Bed. Growing like gangbusters over the past week! 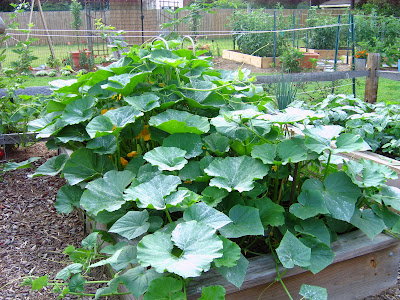 Flowers on the Hokkaido Squash. Notice the inside of flowers are filled with bees doing their busy work! 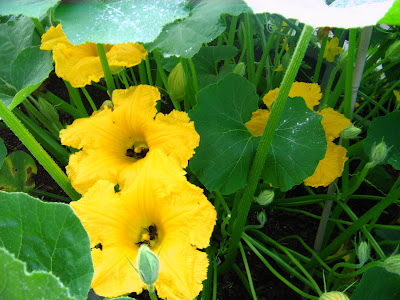 I left a few of my grape bunches unbagged so I could monitor their ripeness...the first bunch has turned purple! You can see why I bagged the rest...birds! 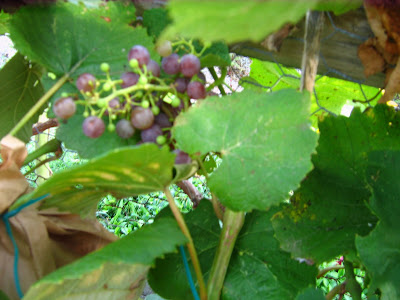 In other news around the suburban homestead...we took Loch to camp yesterday! How awesome is 4-H in that they have sleepaway camp for kids as young as 5?!! Nervous, you ask? No Way! I can't wait until Finn is old enough to go with Loch next year. I'm not nervous even a little bit...I know how awesome camp is and he was excited to go. He is also my kid that has no separation issues either, he is "Mr. Independent". I just hope he takes some pictures with the camera we sent with him. Finnegan was feeling a bit lonely on his first night without his big brother, so Daddy set up the tent and we went camping in the living room since it was raining outside! We even set it up right next to the lake (aquarium)! Picture is kind of grainy since I snapped it with a kiddie camera. 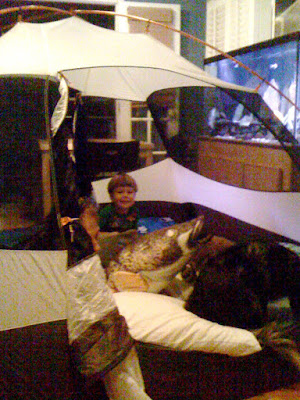 Here's a few pics from Finn's sleep study at the Children's Hospital the other night. It looks worse than it was, lol! He said he was turned into "Spiderman"! We will get the apnea results later this month. I guess he and Daddy had a good time there watching a movie and feeling like a science experiment! 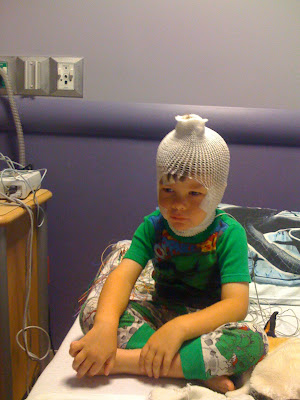 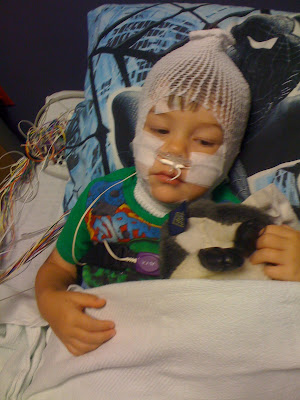 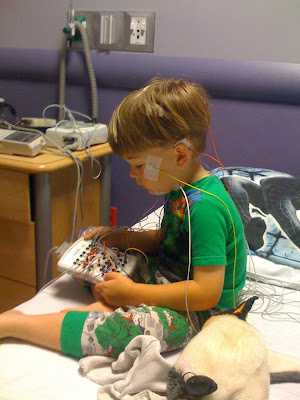 Getting back to the Garden...

I spent the day getting some things done in the garden that were being neglected the past couple of weeks. The weather has been strange this year, unseasonably cool (mid-80's) with very little humidity (definitely not complaining!) so things have been slower than I am used to. I have had some cherry tomatoes, but am still waiting on my first heirloom tomatoes! I picked a good week to let things go since the chores only took a day to get caught up! I pulled weeds, wove my tomatoes into their trellis system, and pulled out all my bolted lettuces. I had never let my lettuce get so tall before, they looked kind of like 3 foot Christmas trees for bunnies! Then this evening, I finally went on a Japanese Beetle Massacre, ugh! My grapes were covered with them, all piled on top of each other in their shiny green disguting-ness!
Here's the damage, the beetles are belly up on the leaves below! 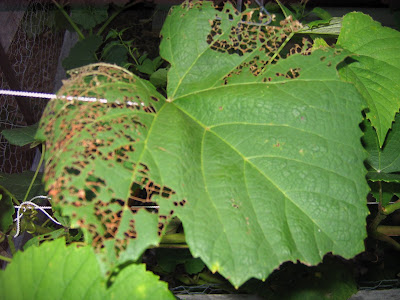 Speaking of pests, I have been meaning to post a pic of my first Tobacco Hornworm. The night this happened, no kidding, I dropped my little cultivator and ran! If there were any neighbors looking on, they probably thought I had found an anaconda. I have seen these in books and was familiar with the PICTURES but nothing prepared me for a live performance! This happened while I was actually searching for whatever had topped my potatoes...earlier I had noticed that one of my potato cages looked like someone had taken a weed whacker to the tops. Those of you more seasoned than I will probably laugh at the fact that not only did I take pictures, I even videotaped this monster to show my husband what was living in our backyard! 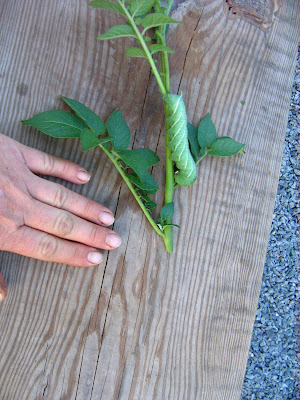 After consulting the trusty "Good Bug, Bad Bug" book for eradication tips, I almost gagged when I read "pick them off by hand, cut in half with knife, there is no known pesticide..." GROSS! Needless to say, I cut off the whole branch, and after using it for my photo shoot, put it in a Ziploc and into the neighbor's trash can, lol! Of course, my husband, upon seeing the video emails me from the ship and says "are you sure that's the only one?" So it's back out to the garden and I only found one more, but it looked like a bird had been pecking at it since it was dried up in the dirt so I left it. I just checked again tonight and I didn't see any, although now I know that if you see one with white sacs attached to it, leave it...those are beneficial parasitic wasps that will hatch and kill it for me! 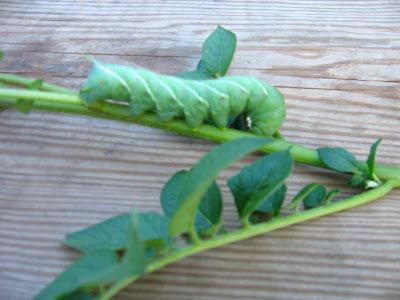 Thanks, Kelly for reminding me to post the hornworm pics...maybe I can prevent someone else from a heart attack the first time they see one, lol! This one's for you 8)
Not much to speak of for the harvest the past week, a few Pinot Noir Peppers and Purple Rain Eggplant (the tomato and carrots were "harvested" at the farmer's market!) Tomorrow should be a decent picking day, I noticed while doing other chores that I have alot of bell peppers, and a few cukes and cherry tomatoes ready, along with another 40-60 jalapenos. I wasn't prepared to preserve anything today, so I figured it was better for them to sit on the plant rather than on the counter until tomorrow! I may let the jalapenos go to red this time, since I already have 2 gallon sized bags and several jars pickled of green jalapenos. 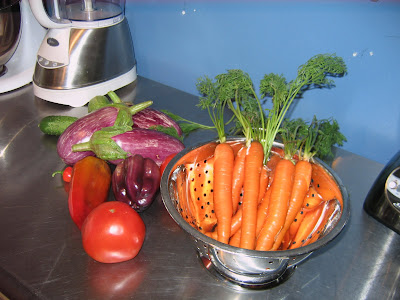 And, last but not least...tonight is my first night without one of my kids! The youngest, Finnegan is spending the night with daddy at the Children's Hospital for a "sleep-study". It is very strange without him here...and quiet! I am sure Sailor/Farmer/Husband will take pics for me after they get him all hooked up to the probes for me to post. Finn was looking forward to "being turned into a robot" and I am sure he will do fine, especially since Daddy will be there sleeping on the couch in his room. I can never get any sleep when I am in a hospital, and my husband seems to be able to sleep wherever he lands, so he was elected for this gig!