Ok, so I fell of the organic wagon and broke out the Roundup. This bed is only a month old, several layers of cardboard, and 3-4 inches of mulch! Ugh, the nightmare that is Bermudagrass. As anyone that lives in the south can tell you, it's horrid stuff. I call it "bamboo grass", since it spreads by rhizomes underground and this chain-like crap above ground. The first pic is a closeup, the second pic is my border and how much of it I had to kill. At least I didn't use it near the veggies. And the worst part is that it will be back in just a week or so. Several treatments hopefully will do it. Expensive problem, though...will be trying a less expensive brand for the next round. I am on a self-imposed deadline of Thursday to be done weeding all of it, since today and tomorrow are only supposed to be in the 70's, which is incredible weather for this time of year to being doing hard chores. 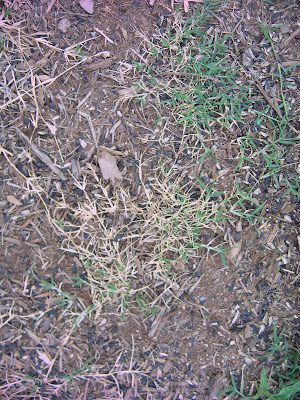 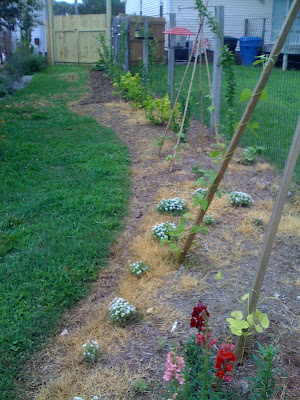 On to better things...I pulled the shallots the other night! I am having to hang them inside since it is so humid most days outside I am afraid they might rot. 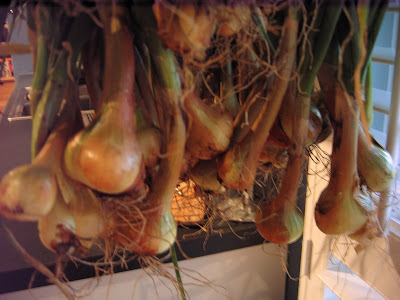 Here's Loch harvesting a carrot that he surely will not eat... 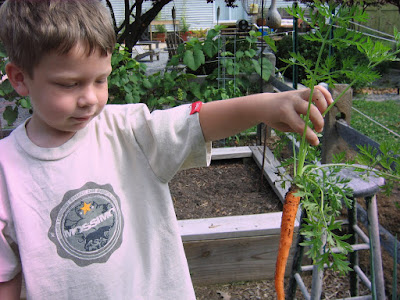 Loch & Finn posing with their harvest of carrots 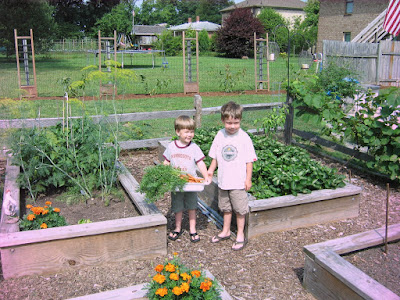 I feel bad (kind of) that the first batch of homebrew that Sailor/Farmer/Husband made will not wait until he gets back for the first taste...I had to "test" it and make sure it was aging properly - it is :) !! It was absolutely fantastic and I wanted to open another tonight and "test it" again but I forgot to put one in the chiller, so I am settling for a glass of wine instead. Now we need to name it... 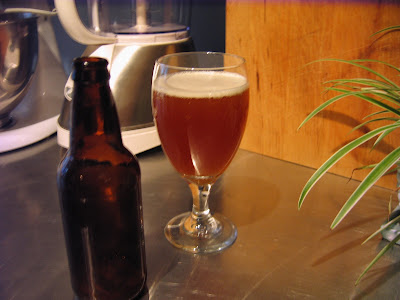 I am now officially the "crazy chick"... with bags all over my grape bunches! My son was watching me from his sandbox for a long while when I finally asked "What are you looking at, Loch?" (knowing the answer!), and he said "I'm not sure, Mom", followed by "are those lunch bags?", and finally "are you tired of packing sandwiches for my lunch?". Wow, I had been having a trying afternoon with the kids, but I could no longer contain my laughter at that point. Just when you think you can't take anymore headaches from kids, they come out with a gem and it makes you realize how awesome it is to be a parent. 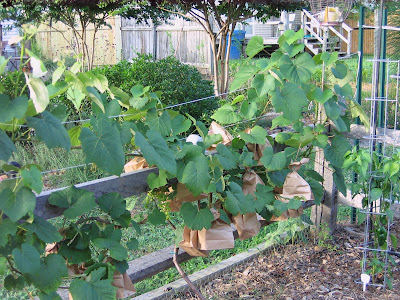 I could go on and on about the garden chores this week, but if I don't quit now, I will not have any relax time catching up on the DVR tonight! By the way...any of you seen the new A & E show Obsessed? For a type A, anxiety ridden, OCD person such as myself, gotta say I love it!! Kind of fun to watch what might happen to me if I let myself slip over the edge :)
Posted by Erin at 20:37 9 comments: