Well, at least he'll be immune after this...!

Swine Flu is my new houseguest! I was hoping to write a post on our rockin' fun Halloween Party, but my priorities have changed this afternoon. Sucks when all you get in your candy bag is H1N1 germs.
Lately, every time the phone rings during the school day I fear it is the school nurse. Up until today, it was usually my best friend on the other end to my relief! Today at 12:30 it rang and it was indeed the school clinic. I raced over there and he looked awful. We went straight to the Dr.'s office where he popped positive on their H1N1 test. By then he was shivering terribly and kept kind of "falling out" where he would just lay down wherever he was, temp of 103. Luckily, he qualified for the Tamiflu and she also prescribed some for my younger son who is not showing symptoms yet, although it's probably a matter of time since they share a room! So now poor Loch is eating his dinner in his room, where he is quarantined. Finnegan will be bunking with us at long as he is healthy. Trying to keep the two apart is nerve-wracking to say the least! 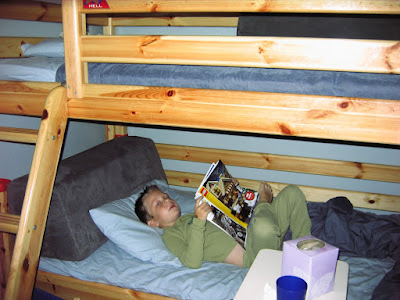 If there is an upside to all this, Loch will be immune to it this year now! We have been waiting for vaccines to arrive for sometime now in our area but it isn't happening. I heard on the news all the local pharmacies were running out of Tamiflu, but our pharmacist told us we got 2 prescriptions out of the last bottle they had, lucky for us, but maybe not for the others we saw arriving with masks on as we were leaving. I tucked it into my purse and hurried out, almost afraid I was going to be mugged for it! I will say that Tamiflu appears to be like a magic elixir, as Loch's symptoms are getting better with every hour.
Incubation is 48 hours, so no doubt that one of the 17 (no kidding, 17!) kids at our party was shedding the virus germs. Now we are on pins and needles to see how many were infected. This is especially upsetting to me since I hosted the party, and went as far as to write reminders on the mirrors of the bathroom about handwashing, put out Purell everywhere, but I guess when it comes to kids, what more can you do? I had a feeling about having a party this time of year... and apparently it's just a matter of time before we all get it! I almost think I should let Finn back into his room so he can catch it and get it over with, but I realize this illness is really nothing to play around with.
Hoping you all are getting vaccines delivered to your area soon! Time to go tend to the sick...
Posted by Erin at 17:46 8 comments: