I have been a bad blogger this week!  Lots of things going on coupled with the fact that they don't really have anything to do with the garden have had me skipping out the past few days, but I will give you a little update - however boring it may be!


Loch has over an hour bus ride now.  I don't even know what to say about that other than we might as well live out in the sticks!  I had longer than that when I was a kid but we actually DID live in the country, not a city with half a million people as we do now.  I can't say much though, since it IS worth it that he is going to the gifted program and the district does provide transportation, so although I can get a little peeved that I had to reschedule after-school activities for later in the evenings, I really don't have anything to complain about and will just accept it.


The chores here the past week have consisted of maintenance type gardening and general sprucing up, rather than fall planting.  Here is Finn, using my little pruners for the first time, snipping off dead hosta flower stalks: 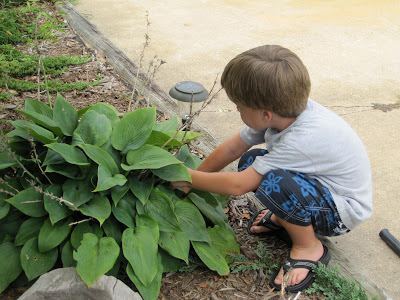 poor guy had me saying every 10 seconds "watch where your finger is!"
Our big Master Gardener Fall Community Festival is this weekend, so I've had meetings and baking to do for a bake sale.  Here's yesterday's start to a "15 pumpkin bread loaf" day!  Kitchen was HOT last night. 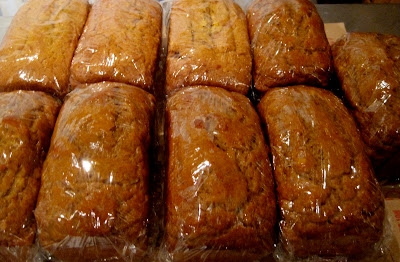 Speaking of hot, it's just gross here again this week.  Rain, high humidity and temps in the high 80's again all week, heat indexes higher, yuck - I want fall to come back!
For everyone following Mama Dove's Hurricane Irene adventures, you can now rejoice!  The babies are here!  I can't believe they (or rather Mama Dove) made it through all that, as well as being relocated in a dog crate in driving rain - doves are amazing parents.  Every other bird flew to greener spaces that weekend but Mama, she would not leave.  Even though Mr. Dove wouldn't go into the covered and lashed down dog crate, we saw him huddled below the deck where she was throughout the storm, unbelievable. 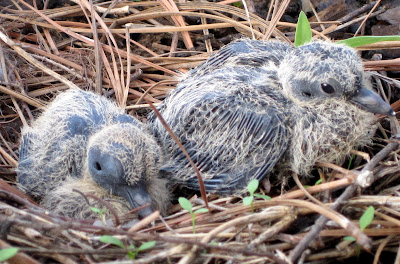 Reveling in the quiet!

Miss Angela reappeared like an angel this morning!  She looks as excited to see them as I am to send them off! Here's the whole gang this morning, my driveway is the bus stop so the noise level climbs early in the morning around here. (Loch is missing since he left a little earlier on the "short bus" to the Math & Science Academy LOL) 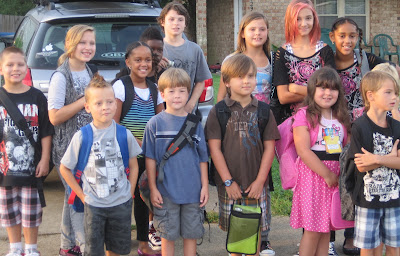 Every year I forget how great this day is, bye Finn! 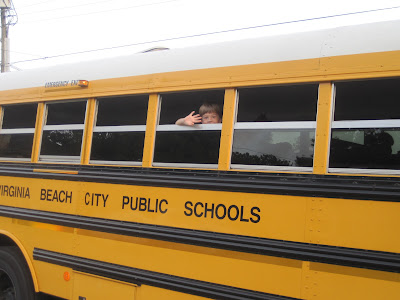 Now what?  I'm completely surprised at my lack of plans today, but maybe that's a good thing to take the first day and just revel in the peace and quiet...
Posted by Erin at 09:58 18 comments: