Kicking off my favorite time of year!

I hope you all had a great Thanksgiving!
It was a quiet day here, we are a thousand miles from family again this year, but we didn't let that stop us from doing the "dinner" thing.  We may take some flak for this, but I made a HAM instead of turkey this year.  Although I do love turkey, I don't like the smell of it cooking all day, and the only thing I detest more on that day than cleaning a bird carcass is the thought of wasting the bird carcass LOL, so I decided to avoid it all and do the ham :)  Tomorrow I will use the leftovers for a ham and bean soup that I can pressure can also if I have enough.
The night before the big dinner day we decided to forgo cooking and head to our favorite salad bar place for dinner.  When we got there it was sunny out, but when we left they had just done the illumination of Town Center, so that put me in a bit of a holiday mood, even though hubby was wearing shorts!  Yes, it was in the 70's again, yuck! 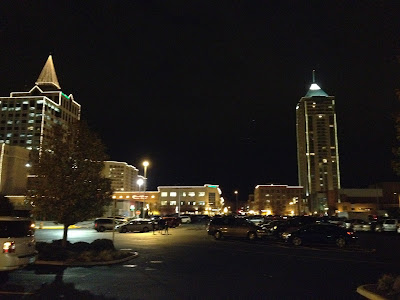 Lots of things to be thankful for this year, but I'm especially thankful for a child that will actually wear the sweater out to play that mom knit :) 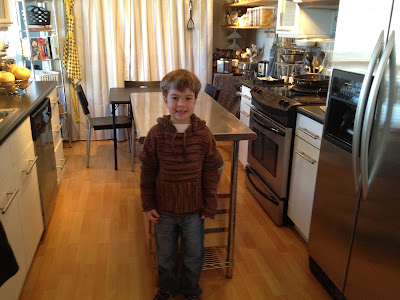 I decided to try Cake Pops for the first time... 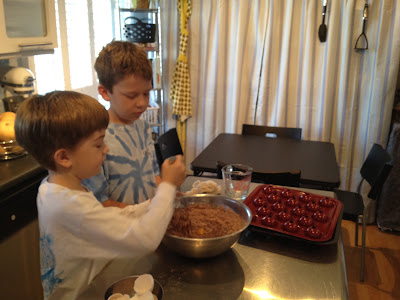 Not too bad for the first attempt! 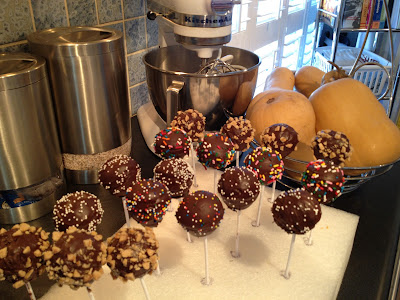 I will admit to shopping ON Thanksgiving Day!!!!  I can see you cringing right now, but hey - it was a craft store so does that make it any better?  I didn't think so.  80% off an item I had been coveting for 6 months made it okay for me :)
One thing I found interesting was possibly a sign of the current economic times - I passed Target which opened in the evening and the parking lot was almost empty, but when I pulled into Michael's at 6 pm there were lots of cars and several more pulling in behind me.  I'd like to think that means more people are instead spending money on their crafts, hobbies, their own home and making gifts than in years before.  I know I don't have the cash for new tv's, gaming systems and the like, but I sure can find a few dollars for some yarn for a knitted gift :)  Funny thing too, everyone in there was pleasant and chatting with strangers instead of pushing and shoving! 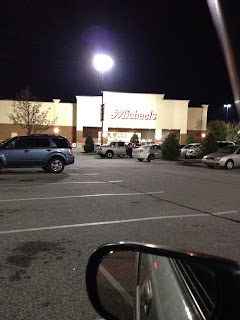 Then it was time to dig out the Christmas Gear... 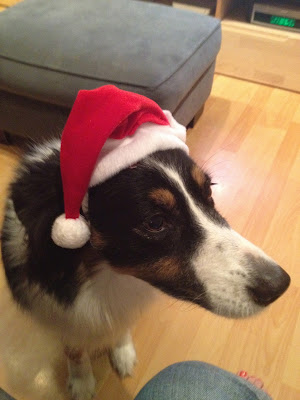 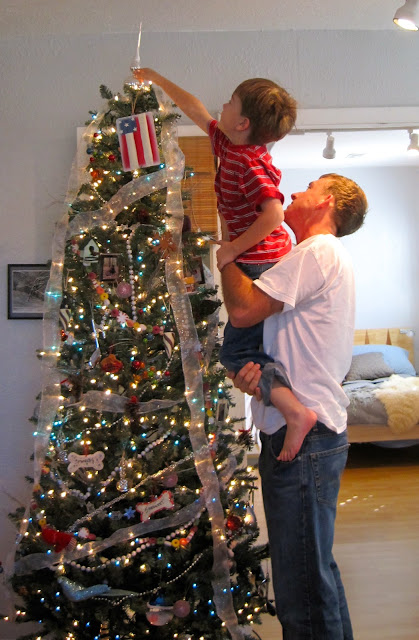 And decorate the tree!  It's never too early for military families to decorate.  Last year many of us military spouses had our Christmas stuff out after Halloween LOL, I think that may have had something to do with the fact that our spouses were on deployment and due to return just a couple of days before Christmas, we were just a bit excited :)  Remember last year here?  Hubby had to climb in the car and drive 1250 miles just hours after stepping foot on dry land!
Oh yeah... WHAT could have possibly had me out shopping on Thanksgiving night?  That white carousel below - reg price $40 - with the sale and coupons, I snatched it up for under $10!  I can't wait to stock it up with crafting nonsense :) 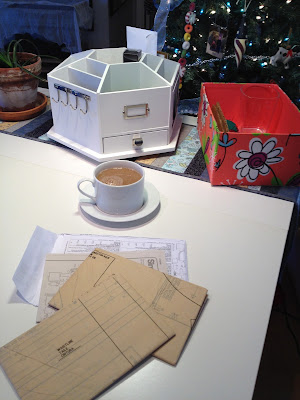 Today's agenda:  sending the kids outside to play with daddy, hot chocolate and pattern cutting for me!
Tina over at Our Rustic Roots asked the other day about crafty/sewing spaces, so I'm going to do a post later on about my space.  I meant to do a post about my sewing/crafting space saving setup last year but never got around to it, although I did do one on my yarn storage "hallway".  I even had the photos grouped on my old Mac's desktop but we all know what happened to that thing.  Maybe if everyone has time in the next few days they could post a few pics of their setup for whatever the wintertime hobby may be - large rooms, tiny rooms, kitchen table sewing, whatever space you have, show us how you set it up!  I know this time last year I was a freak show with my newfound obsession with my search for a sewing machine and learning how to sew, and creating a place for it all naturally became entwined with all that.  Besides looking at peoples' pantries, is there anything better than snooping at crafty spaces?  I think not.
Posted by Erin at 11:51 22 comments:

It's done!
Susan at e-i-e-i-omg! challenged us to an apron sew-off and it was just what I needed to snap out of my blogging laziness the past month and get back into the swing of things.  Thanks, Susan!  Head over to her blog later today when she will link up all the participants to check out all the aprons! 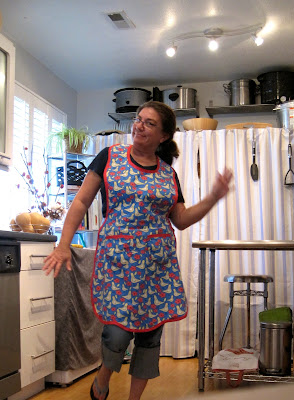 Finnegan said it looks like I'm getting x-rays at the dentist -
whatever, who asked him?!
Posted by Erin at 07:58 21 comments: