For days now I have been wanting to post, but with all that has happened here recently that has created much stress I kept hoping I would be able to brush it off and have positive things to say.  Hasn't happened yet so I'm just going to tell y'all what happened and try my best to "purge it" and move on.


The hubs is back! 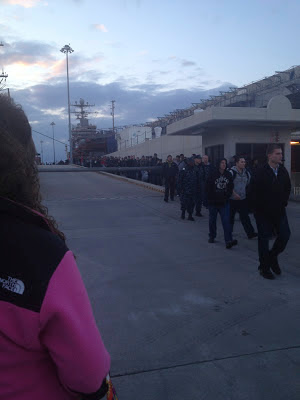 they all got off the ship with hardly any bags, thinking they would only be in town a couple of days!

Yes, our country has trained these people and sent our lives into upheaval for a year of anticipation and getting emotionally ready (and we were!), but now has decided it cannot pay them or pay for any part of the deployment.  We can thank sequestration for that.

It was an odd thing, having him leave on deployment only to get a call "come get me, I'm baaaaack!".  It was so sudden it was absolutely unreal in a world so structured as the military life.  The ship had not yet crossed "the pond", so was scheduled for what would equate to a 4 day liberty port here for a really quick visit and then it was off to cross the Atlantic.  When the ship pulled in it was obvious that it was only a stop for a couple of days, as all the jets were still on the deck (those have to be flown off while the ship is out to sea if they remain in port), and the hubs came down the pier with only a small backpack, having left everything else onboard.  Day 3 of the 4 day visit we got the call - no deployment, government can't afford to send in the replacements... (yes, there is another ship that now cannot come home as scheduled because of this!).

Some might wonder why this isn't as happy an occasion as it would seem, so I will try to sum it up the best I can.  For 6-9 months before deployment even starts we tiptoe around not getting "involved" in any big projects for fear of not completing them, they are gone most of the year preceding on little 4-6 week long trips so it is very stressful on the kids, even more so than deployment, and we actually start counting down the days until they leave for good, so we can start counting down the homecoming!  We have to spend hundreds of dollars on specialized military uniforms and gear (it's 120º literally over there, and they have to work in full gear on a hot flight deck so items wear thin quickly with sweat).  People buy nicer gifts than usual at Christmas or birthdays and spend money to get home to see their families and it's okay, because we know that the extra combat pay they get on deployment will pay them off quickly, after all in the military that old saying about death and taxes is actually deployment and taxes, they are always certain.  Not anymore.  We actually have it good - there are many sailors who gave up their apartments and moved their families back home, and now what do they do?  There is actually an emergency housing situation here now, many, many sailors with no place to live, no cars since they are stored in other states, those single parents that sent their kids to live with the grandparents during deployment... it's a big mess.

Our country has now gone from our standard "always 2 aircraft carriers in the Persian Gulf" to ONE.  This actually causes loss of sleep in a military family.  The carrier that is over there cannot come home now due to sequestration cuts, think of those families who have been waiting almost a year and are now being told deployment is being extended "indefinitely".

So, while I'm am happy to have the hubs back, maybe you can understand just a little of why it is so complicated.  Add to that the fact that deployment wasn't "cancelled"... they must remain at the ready, so more small trips (called workups), not knowing when he will go next, and whether they can even pay him the extra combat and hazardous duty pay he is entitled to when he is over there.  We try not to show the stress around the kids, because they are just happy as clams to have daddy back, but we have so much to think about these days.  Also difficult is the fact that most of America has no idea how seriously this affects our nation's readiness or even knows or cares about sequestration.

Not very exciting as it hadn't even been a month, but it's a homecoming video just the same...

Funny thing is, the hubs had to leave again last night.  They have to take the ship out to sea far enough to get all those jets off the deck and then return.  I sure wouldn't want to be the Commanding Officer of the ship right now, this situation is just unheard of in the Navy and I bet he is spittin' mad!  Friggin' government, and that's all I'm going to say that is negative.  I'm brushing myself off and going to make a new budget for our family, one without his duty pay.  Maybe Congress could take a cue from us little people and do the same.

Sooooooooo, how are you all?!  I am going to be honest and say I am 30 blogs behind in my Reader but tonight's the night, I'm going to eat chocolate and catch up!  I haven't even planned my spring garden yet, but it's a good thing since it looks like there will be an extra mouth to feed this summer and winter so I would have had to have a do-over anyway!  I miss you all but was really hoping to be more upbeat about all this, but I will next time since I got my rant out of the way.  Thanks for reading, I'm very lucky to have the blog as a coping mechanism and outlet, and I appreciate each one of you that follows our mis adventures!
Posted by Erin at 16:23 30 comments: