We had a very productive weekend and start to the week, FINALLY! I feel like a bear coming out of hibernation, and my yard shows it! We spent the whole weekend cleaning up the yard, picking up twigs and branches that had blown down over the course of the winter, topping off the beds with compost, constructing trellises, and chopping back perennials. It felt so good to have the sun on our faces, although I probably should have dug out the sunblock - but who thinks of that in March? It is also so nice to have something to report on besides my quest for the ultimate organized home and The Chronicles of a Bad Knitter - although you aren't out of the woods yet, I'm still working on both and will be sure to subject you to the updates, lol!
Notable weekend events: 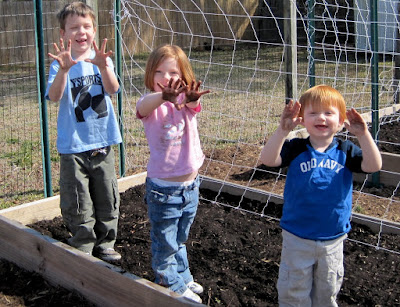 recruited neighborhood children to plant peas - I think a little hard work is good for them, and as a bonus, I got the comment "Peas grow in the ground?" ...priceless! 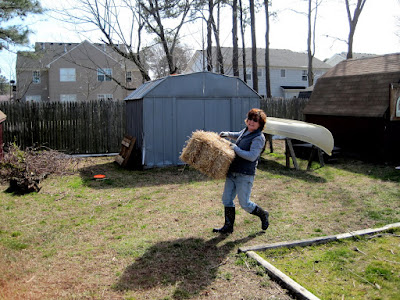 yours truly stacking my straw bales for future use in the potato cages, I don't think the neighbors in the large new construction homes behind me think much of my white trash urban farming... too bad... I will have fresh tomatoes! 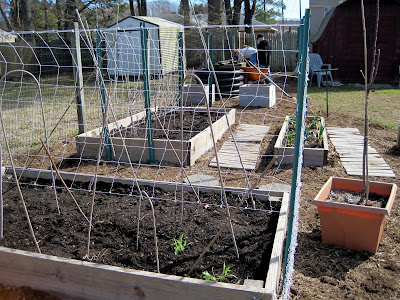 The dog free training zone is back in action - after I planted the peas I stick every available stake or trellis in the beds so my dogs don't go tearing through it. They are really good about staying out of them once the plants grow, but they really enjoy vaulting over and through them in the off-season! 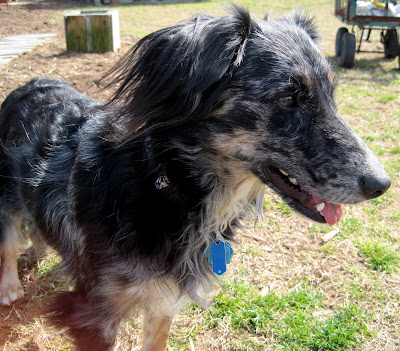 The "puppy" is the one at most fault for the garden-bed-running. Meet Sprocket, the most troublesome yet useful dog around! She is a Jack Russell/Australian Shepherd Mix, a strange blend. Other than the Aussie "frosting", she is all Jack Russell, digging up moles and voles and generally anything she can tunnel into is fair game. Thomas, this is the dog you need for your burglar-mouse, she's have it in her mouth in about 5 minutes! We made up a new breed for her, "The Outback Jack"! The Australian Shepherd brains seemed to have escaped her too, sadly. At least she's cute :) (to us!) 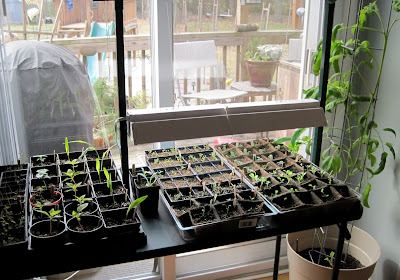 I've been busy repotting seedlings and starting to harden off some of the cold hardy ones such as the greens and lettuces. The operation has now spilled into the kids' room and since I volunteered to start plants for the annual Master Gardener Plant Sale, it's going to get worse before it gets better. 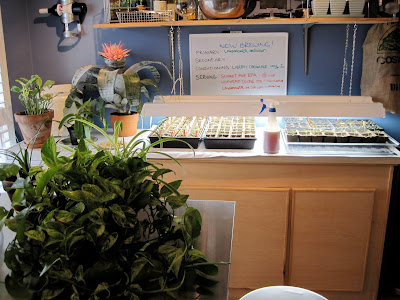 The main seed start area in my kitchen holds the heat mat and my tomatoes, peppers and basil now, since it has more light, and the kids' room is reserved for the annual flowers which are just getting window sun supplemented with one light.

This is the first batch of tomatoes and peppers, just repotted from their little cells. I will be starting more this weekend probably.
Today it's over cast but supposed to hit 70 degrees! Scheduled to get rain the next 3 days followed by cooler temps in the 40's this weekend again, but who cares?! We have seen the signs here that it is ending, and we set the clocks for one more hour of daylight this weekend, so we have seen the light (literally) at the end of the tunnel! It won't be long now...
and what the heck... I just heard a minute ago that Corey Haim is dead? a sad day for a true 80's girl...
Posted by Erin at 10:24 7 comments: