It's Week 12 of kinderGARDENS, time for an update! 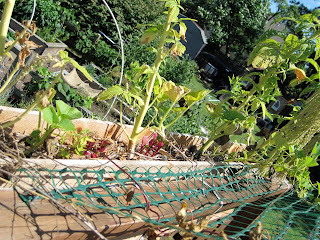 "The Green Roof" - not so much, 100+ degree temps have pretty much cooked everything in the rooftop planter except a bean plant. 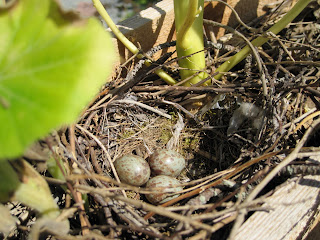 Apparently it's not too hot for "Mockers" our evil mockingbird to make a nest there! 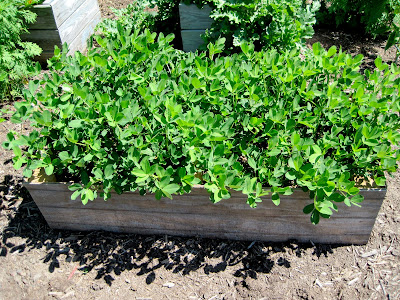 The kids' Peanut Box is doing very well! Not that surprising since that is a cash crop here in our sandy soil and hot temps, it's just fun since we have never thought to try them before. If anyone is interested, they are a very tidy looking garden plant and appear to not be bothered by any insects! 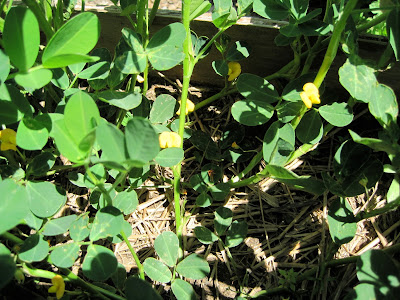 Yellow flowers are the peanut blossoms apparently. They will eventually develop "pegs" which will flop down to soil level where the peanuts will grow from. 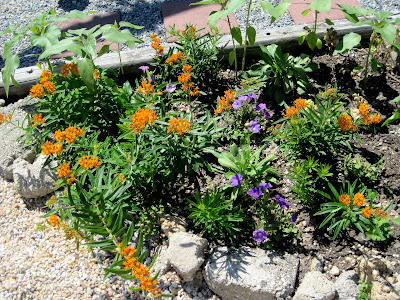 The kids' garden, mom wasn't allowed to plant here, but they did a great job. They decided on Butterfly Weed along with some other miscellaneous stuff they stole from my flats. I see petunias, sunflowers, Bells of Ireland (dead), and some blanketflower I think. 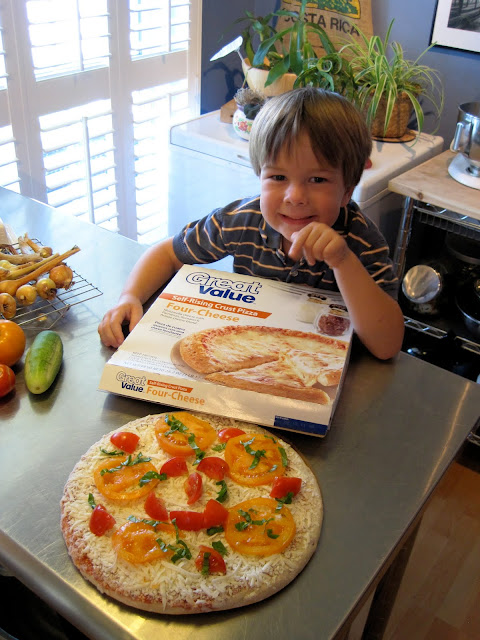 See the Smiley Face?
We have been so busy enjoying cooler weather that we have been working and playing non stop in the yard and I haven't had time to cook proper meals, so I made a cruddy W@lM@rt pizza into something lovely with the addition of our tomatoes and basil! 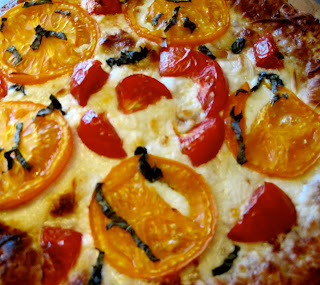 Turned out pretty well! It's nothing like Daddy's homemade thin crust pizzas, but ooops, I never bothered to pay attention to him when he makes the dough - I thought that was me being smart that way I never had to cook on pizza night - that worked out fine until he deployed! 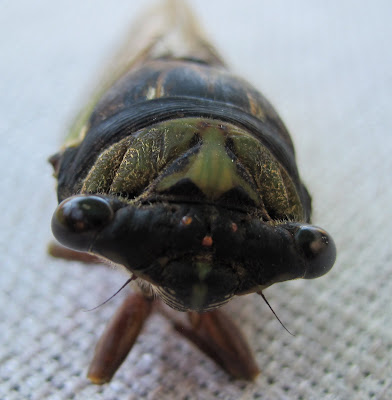 Kids are having fun with THESE GUYS! Awesome "DogDay Cicadas"... they are everywhere right now. I know some people hate the noise, but I love how loud they get in the evening. It drowns out the thundering FA-18's as they roar over the house! 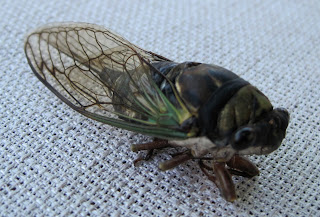 Mr. Dog Day Cicada
If you or your kids have these guys and want to know more, I found an article with some good pictures here! I admit they are pretty fun to play with!
I have so much going on in the yard, but no time to write as of now.... suffice it to say temps have been 78-80 degrees for 3 days, NO humidity, and cool nights in the lower 60's... my windows are open enjoying an evening breeze. Hard to believe we spent the last few weeks in a virtual steam oven. Temps are to return to that on Monday, but for now we are busy enjoying. Tonight is forecast for 58 degrees so I am thinking about setting up the tent and camping with the kids in the garden. We'll play "flashlight" and listen to cicadas! Oh, I can't wait until they are old enough for "real" scary stories!
Posted by Erin at 17:32 15 comments: 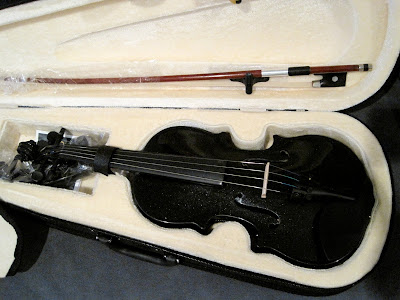 Two guesses on which kid is learning to play fiddle!
In today's harvest: The "Orange Wellingtons" have arrived!
I have been anxiously awaiting these tomatoes, they are very pretty, and my first non-red/black tomatoes I have grown. They are much more orange than they look on my camera! 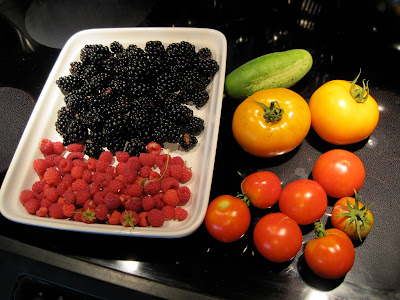 I have been running non stop since yesterday morning trying to be as productive as possible during our cool weather. It seems that all our appointments, bill paying, swimming lessons, shopping, errands have all been begging for attention and I capped it off with our monthly grocery trip, ugh! This morning after spending 2 hours in the commissary on base (on military payday at that!) fighting the crowds, I finally made it to the freezer section which I am usually able to bypass pretty quickly - my usual is to cruise by one door, fling some Boca burgers (my kids love 'em!) into the cart and boogie to the checkouts - but nooooooo! Kids start begging for this: 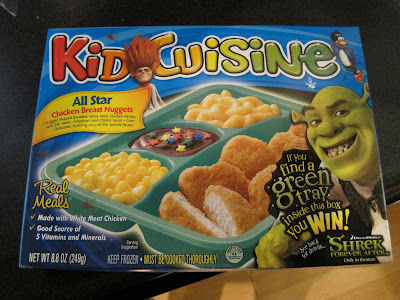 Don't know where/whom they heard about these from (tv?), but begged and begged until I finally said, "whatever" and put 2 in the cart. I was looking over my shoulder all embarrassed until I saw a lady with 4 overweight kids with a stack of them in her cart. I figured I could fly under the radar with her next to me, so I hid them under some other stuff and trucked on. I can't believe I did this, but my kids never eat junk, not lunchables, corn dogs, pizza rolls, none of that - so I relaxed this one day since I knew I was not going to have time for cooking anyways tonight.

The best part was watching them as they prepared to eat it. They went from jumping up and down excited while is was spinning 'round in the microwave, to just plain being dumbfounded when it was done. Check out the faces! 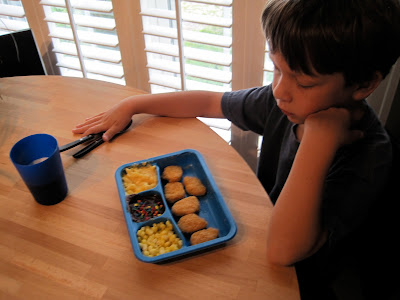 Fledgling Fiddler Lochlann says "Mom, it looks like the plastic food we had in our play kitchen"! I believe he's right...
I got LOTS of stuff done today! Loving the weather - will be working hopefully outside all day tomorrow. Should have some pics of what's going on once I clear away the weeds.
Maybe Loch should practice his fiddle outside, maybe that will work on those Japanese Beetles, nothing else seems to scare them off!
Posted by Erin at 20:44 11 comments:

Bringing Out the Dead

As promised, I will now present to you the things I did not post pics of while showing what has been loving our heat and humidity lately! I can no longer sit here all smug with my green lush photos... it was all a lie...!

Here it comes... the death and destruction of the past month's heat wave. 15 straight days of heat indexes in the triple digits has taken its toll. 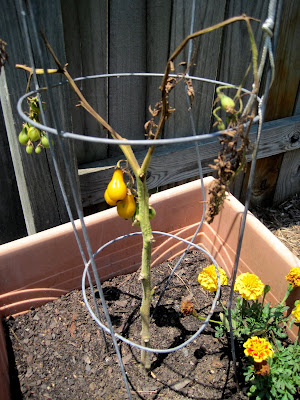 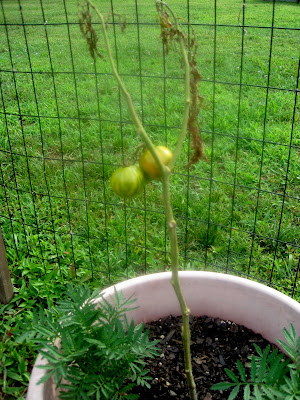 My only Red Zebra... they were chugging along fine, then bam! Never even got to see pink... 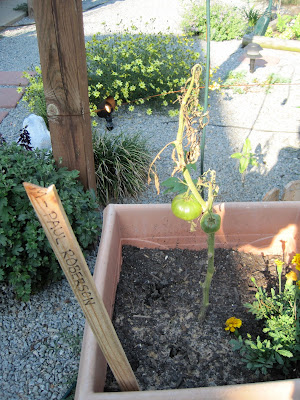 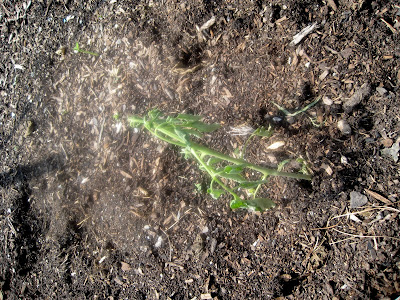 I pulled out all my Edamame, found this volunteer True Black Brandywine in my hand, and tried to frantically "stick it back in"... not so much. 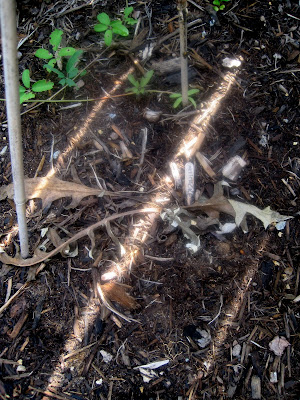 Yeah, this was an Artichoke... all 3 look exactly like it... can you see it? The brown toothy leaved stuff!
Lessons learned: DO NOT try to contain heirloom tomatoes in containers! (I just had to try!)
No more Artichokes
Luckily, all my other tomatoes are doing fine! Severe weather passed through last night, and on the other side, cool temps! It's not that I haven't had anything to blog about in the garden, more like I have so much backlog to do that I haven't had time to sit at the computer! This morning I felt the glass storm door fire-style before I let the dogs out...COOL! I was so excited I woke the kids up screaming "it's not 100"!! For the next 3 days we are supposed to have temps ranging from 78-83 during the day, high 60's at night, I am so excited to get back and enjoy my garden again, at least for the next 3 days. Hope you are all having good weather, too! I will be back with you all as soon as I can get caught up on the garden stuff!
Posted by Erin at 20:00 11 comments:

Still heatstroke-hot out there, but I got a few things accomplished today. Wednesday we are supposed to have a cool front come through that will bring our temps back down to norms of mid-80's, so I expect I won't get much real outside work done until then. We are all bored, but honestly, what can we do with heat indexes in the triple digits? This morning, both my kids told me I was "lazy". I guess because they can't go outside to play until evenings and are bored and saw me reading a book that means I am lazy. I know I shouldn't let that get to me since they are little kids, but it bothered me a bit since that is the #1 pet peeve of mine: laziness! Never mind that I did dishes, swept, did laundry, brushed the dogs.... I'm lazy!
Not wanting myself to spiral down into self-hatred because of that little remark (hey, it doesn't take much with our heat induced low morales), I decided to go ahead and do something with the harvest that has been accumulating.
Today's Harvest: 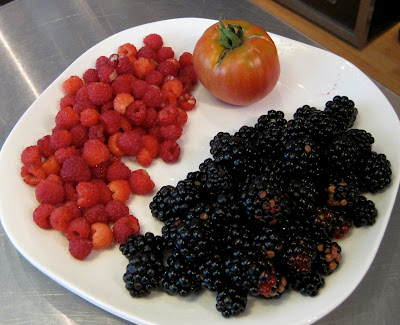 Raspberries are always eaten fresh right away, but these blackberries were combined with the ones from yesterday and juiced. I ended up with 2 more pints of pure blackberry juice for the freezer and a little extra for an adult beverage tonight for the lazy mom! I am actually thinking of making blackberry wine I have so much coming in this year. A few years ago I would have turned my nose up at the thought of such a sweet wine, but now that I grow my own the wonderful redneck-ness of the idea has got me wanting to try it! 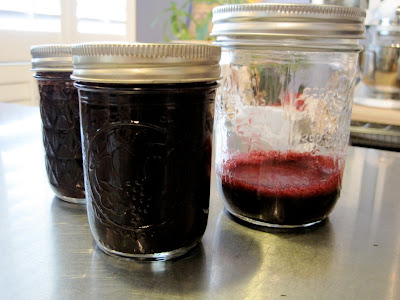 By now I was feeling a bit more energetic so I decided to move on to the tomatoes that have been staged on my counter from the past couple of days. This is an odd time for tomatoes, a bit much to eat fresh right away, but not yet the saucing & canning days of late summer...
Salsa Time!
Back out to the garden to get some jalapenos and a couple of immature mini-stuffing bell peppers, fish peppers and cilantro. I combined this with one of the onions still hanging, and the very last of 2009's garlic and shallot. 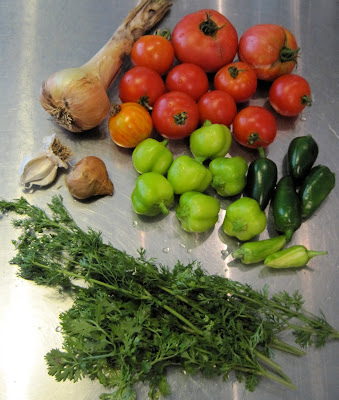 After mixing it all and adding a bit of lime juice and vinegar, it is now "chilling out" in the fridge to be enjoyed as a meal for me! Loch won't eat it and it's a bit much to expect them to eat this as a meal in itself, but I will thoroughly enjoy it! I think Finn will have a bit with some chips, though... see the video below for a huge step in the vegetable/kid combo! 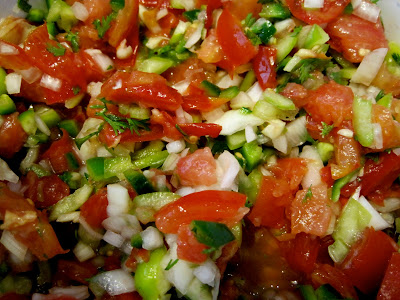 The video below just blows me away....!
Honestly, I really want to get back to being "lazy" - I am reading a lovely trashy romance/murder novel set in the hot and humid Louisiana swamps... I have been reading so much non-fiction and biography type stuff I forgot how wonderful it is to get lost in a good fiction novel! This is the perfect book for me in the lawn chair tonight watching the kids play while I'm sweating and swatting skeeters off of me, I can pretend I'm right there in the swamps!
Posted by Erin at 15:27 15 comments: