The cold is back, and supposed to hang around until this weekend, but come Saturday it's game time for those seedlings, rain or shine, cold or hot! Lows should climb to the mid 50's on Saturday so I'm hoping won't have to worry about freezing those poor seedlings after tomorrow night.

Speaking of, they are in bad need of planting, like two weeks ago!  I checked the calendars from years past and sure enough this is unseasonably cold at night right now, I usually have them in by April 6th. 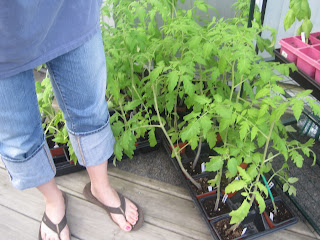 I start them later every year, and note to self, I will not start them until March in 2013!

With the cold and wind, I have no real progress to blog about so here are some photos I shot yesterday of what is going on in the garden right now...

I don't remember planting these, but I must have LOL! 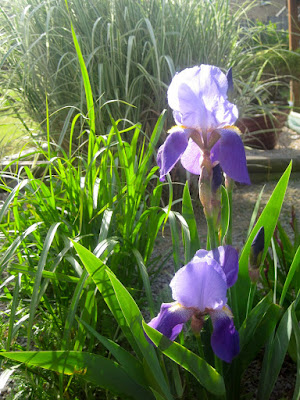 Lettuces and Turnips, with some tiny invisible Scallions growing in the middle of the bed... 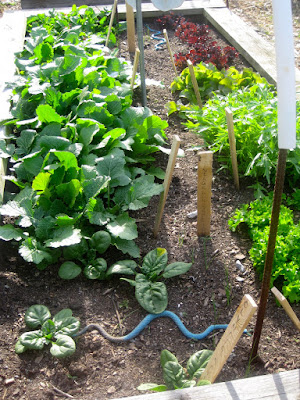 Bad News of the day yesterday -NO PEAS this spring!!!  Below, this bed was packed with 4 rows of seedlings about 2 inches high last week and now all that is left are big "Vole Holes" and random Lamb's Quarter that has creeped in. The bright side is that now I don't have to anxiously wait until the pea vines stop producing to have the bed for summer squashes LOL... there's always fall to try again :(  Fair warning, I have NEVER seen so many voles in my life already this season, it's not going to be pretty this year... 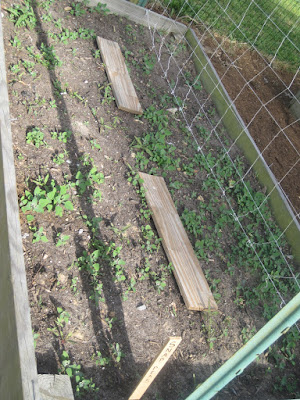 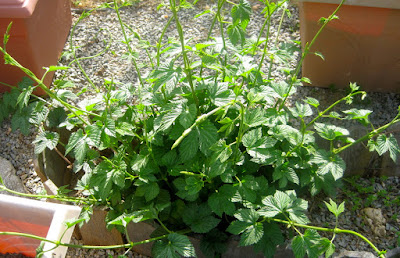 Look at these mounds of mums already!  Looks like I'm going to have to cut them back in June to prevent them from budding too soon.  My "Ditch Lilies" are self spreading pretty well in this area under the Crepe Myrtle trees.  I'm sure I'll regret putting them there some day but for now I'm just hoping they will help choke out the other weeds :) 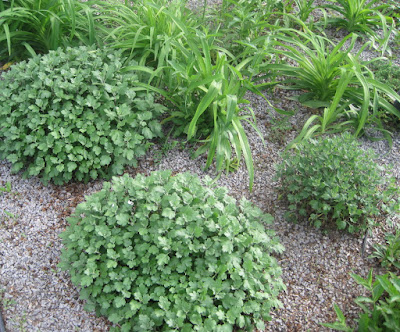 Speaking of weeds... couldn't grow these Johnny Jump-Ups worth a darn in the pots I planted them in last year, but whaddaya know, they seemed to have migrated here by themselves - these little rogue "weeds" I will let stay! 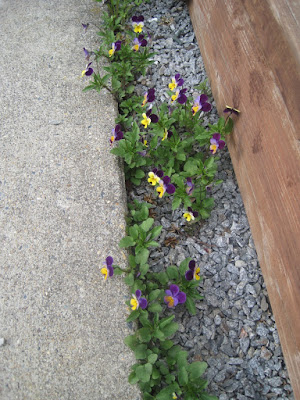 Unbelieveable... I had petunias winter over in this pot?! 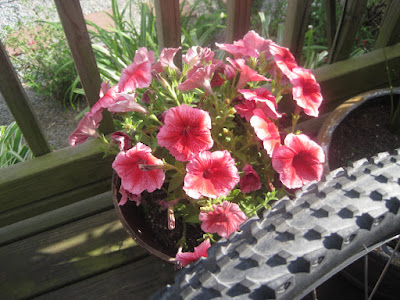 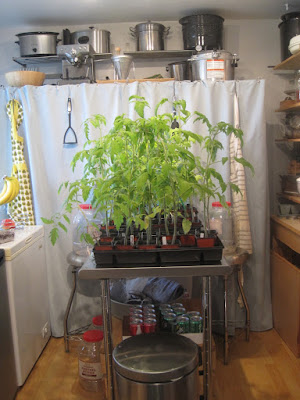 Using up the last jar of 2011's dried tomatoes in hummus - 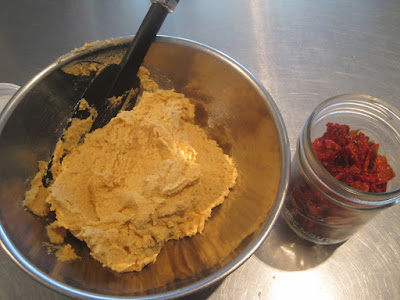 The exciting event of the day is... 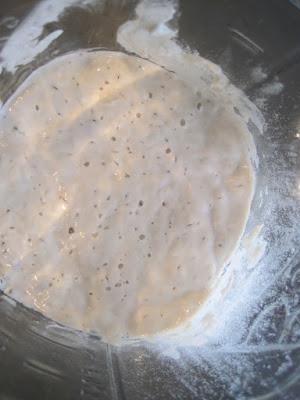 Getting My Act Together!

After Friday's excitement, the relatively boring weekend was very welcome.  I'm sure you have heard, but not only was there no deaths from the jet crash, there were only about 6 MINOR injuries, and all but one of them were treated and released from the hospital the same day.  I spoke of the friends that live in the immediate area of the crash, I sat with them in church on Sunday and couldn't help but steal sideways glances at them and their little baby throughout the service and think of what a miracle we all witnessed on Friday.  As an almost humorous side note, one of the pilots told a lady at the crash scene as he was being tended to by the neighbors who found him "Sorry I ruined your home...".  I'm sure he was in shock, but the absolute horror of the scene around him was also such a contrast to the unbelievable lack of loss of life - that comment kind of sums up the whole strangeness of the day.  Feeling very thankful, for sure.

No Easter Baskets this year, I guess I'm a bad mom :)  We did however, have the annual Peep Shoot! 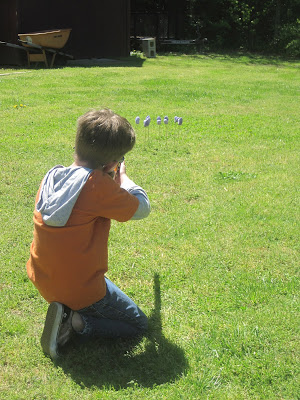 The weather has been so off lately, I know lots of you in the Northeast are having it too.  I couldn't really get started on any garden projects since we were supposed to have winds turn from the north today and bring some lows in the 30's and the wind was a constant 35 mph most of the day.  I had to do something though, to get "ready for spring"!

As far as "Getting My Act Together" as the post title suggests, it involved getting my kitchen in order for the jam season to come and remembering forgotten things... like food in the bottom of the freezer and how to bake bread :)

Yes, I cleaned the freezers.  And the fridge.  Threw away some of last year's produce that had a lot of frost in it but luckily most of it was sealed with the FoodSaver and that stuff looks just like it did when I harvested it.  Guess the cost of those bags is worth it, grumble...

Just so you know I was not exaggerating about seeming to not get anything done over the winter, I present you with this:

Neglected Sourdough starter that hasn't been fed since October! 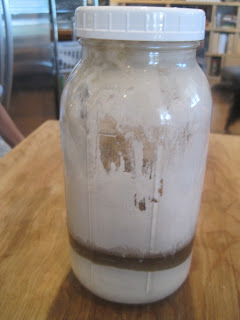 Never fear though, just pour off some of that "hooch" on top and smell... 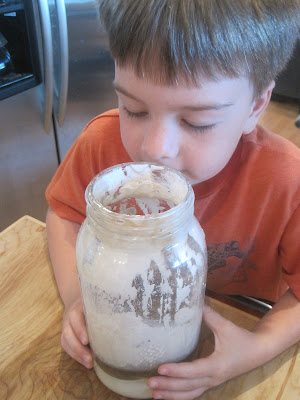 If it smells alcohol"y", strong and yeasty - that's okay, you would know it if it's "off" because you would keel over as if you had smelled rotten milk.  Finn volunteered to give it the sniff test, he's my bread guy.

There's the "hooch", or alcohol type liquid on top - looks gross, but remember that the type of organisms that cause illness cannot live in this yeast/alcohol/beneficial bacteria environment!  If your starter was in the fridge and just forgotten it would most likely just be dead, or as is the case with most - just in a coma and needs a little love. 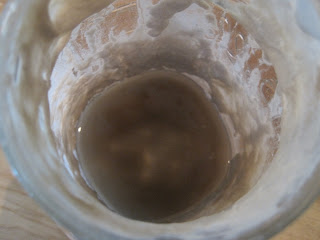 After pouring off some hooch (but I know some people don't pour it off), I put it into a clean jar and fed it, will leave it out tonight and feed it again tomorrow and see what happens.  We will know if can be revived if we see the starter bubbling away tonight :) 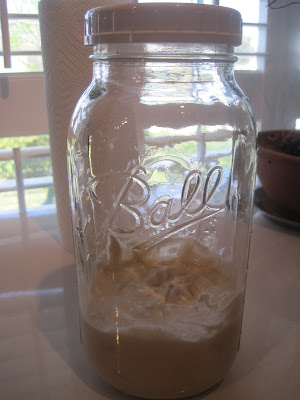 Last summer and fall, when I wasn't being lazy, I had a constant supply of hummus and made it every few days.  After the winter months of laziness, I again have the chickpeas a soakin' tonight, and will be back in business tomorrow of having something healthy to snack on when we get hungry. 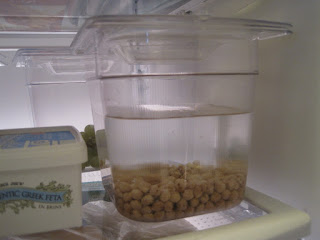 For the BIG news... the lettuces are getting big enough for a harvest... 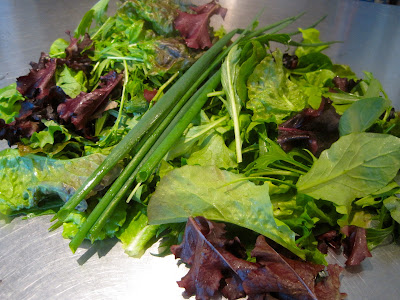 Ignore the crummy out of season tomato on there, but the greens were put to immediate use this evening for a kinder, healthier junk food dinner :) 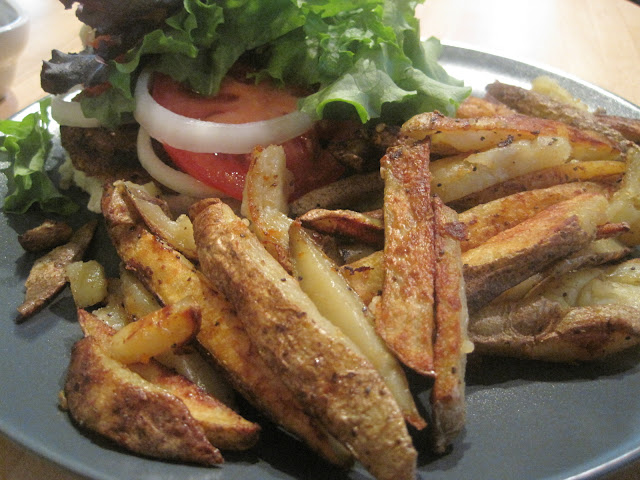 Black Bean Burgers and garlicky olive oil oven fries...  was good, but will be even better when those tomatoes start rolling in!

The winds are really starting blow out there and have changed directions... what the heck are you Northeasterners sending me?  You keep those flurries for yourselves!!!  Time for the waist high seedlings to come in for the night, I don't think they are ever going to be planted this year...
Posted by Erin at 22:22 21 comments: