Too much running around...

I've been in a big of a blog-block lately. I don't seem to have much to write about, or time to do it! I think it's just temporary, since the past week here has been consumed with after school activities, party planning, doing things for the squadron's family support group, Dr. appts, and just random busyness everywhere I turn. I'm hoping things look up this weekend and I can start to play catch-up in the garden, where I WANT to be!
On Tuesday, after the city showed up early and removed the neighbor's trash, I decided that was a cue that my day was going to be great, so I went down to my favorite coffee shop at the oceanfront (that I can now get into since the tourists are gone) and started the day with an iced Black Widow (yum!) and headed back home to get to work.
I was able to finish weeding the whole fenceline that day without looking at their trash! Bonus the neighbor 2 yards over was using a portable sawmill and the breeze was carrying that awesome fresh cut lumber scent right over to where I was sitting on my little garden-scooter! 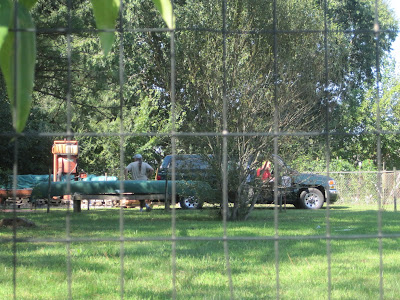 Neighbor cutting lumber
In the afternoon I got my entire lawn mowed and weed-whacked, and then proceeded to do the neighbor's as well. By then I had gotten a little dehydrated (it was 90 again!) and started getting a headache so I spent the rest of the afternoon guzzling water. I think I overdid it a bit and spent yesterday with sore muscles and feeling tired. Was still a good feeling to get some yard work done that I can actually "see results" from.
I was also able to pick a few apples from the colonnade trees, as some were starting to fall.... 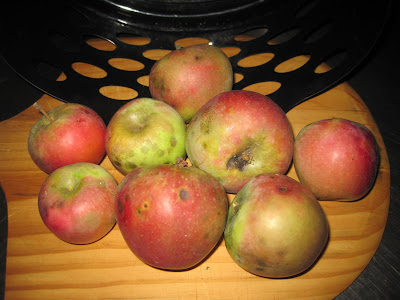 Crimson Spire - Colonnade Apple Tree
They don't look great, but next year I will be more vigilant with spraying. I consider myself lucky that I got any with the intense heat we had this summer. We don't even have apple orchards in our part of the state since they really don't grow here. These were planted in the ground this year, and I'm so glad I did since if I would have left them in their containers this summer they surely would have perished.
Today we had very good news - Loch's hearing is fine! We were told about 2 months ago that he had zero hearing in his right ear and that's had me worried since. This morning we finally had our scheduled audiology and ENT workup at the Children's Hospital in Norfolk where he aced every one of the hearing tests with 100% accuracy and his middle ear fluid and drum movement is looking good. It's possible that the diagnosis was incorrect at his regular practictioner or her equipment wasn't functioning right, but either way, we're good! He had his adenoids out at 1 and tonsils at age 4 so he's really comfortable with the hospital and did great even though they were long tests. We are very lucky to have CHKD right here where we live.
That's all I've got, and tomorrow will be unproductive due to a long quarterly update meeting for the Master Gardeners.... I really NEED uninterrupted time so I can get my garden chores done, hoping for this weekend!
Posted by Erin at 11:55 13 comments:

Okay, I don't mean to offend any Bible thumpers (although I did it again with that term LOL) out there with that reference, but yeah... it was kinda like that!
The neighbor's trash heap has been banished! 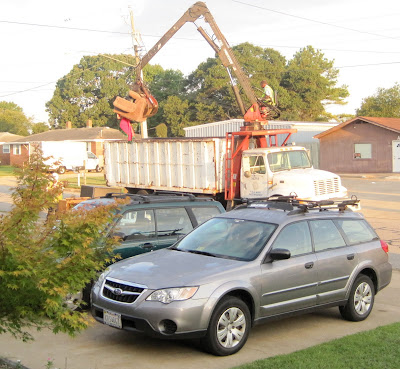 Angels sang and trumpets sounded in the form of the City of Virginia Beach Sanitation Dudes this morning at approx 6:55 a.m. E.S.T. 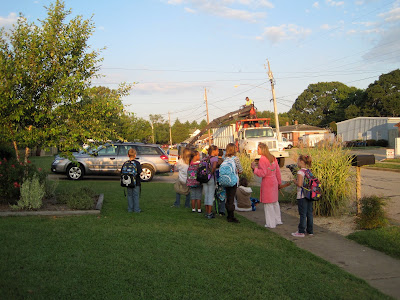 Moms came out of their houses, children had to relocate their bus stop from my driveway to give the saviours some room to do their work...
There was much cheering and clapping and carrying on by the followers 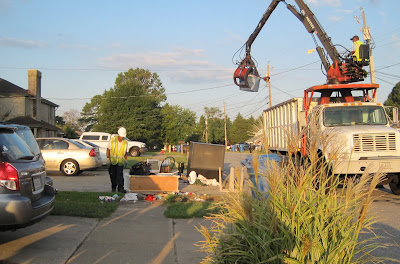 I wonder if these 2 guys have a Facebook Fan Page, because I seriously need to press "Like"!
Posted by Erin at 08:00 16 comments:

Things only a mother could love...

If you don't have an ample supply of painkiller, you may want to look away now. Hope at least the grandparents & daddy can enjoy this...
Posted by Erin at 16:07 13 comments:

so you think YOUR yard looks bad???

Take a look at what I'm having to look at all day...
This is NOT my yard! It is the house directly next door, and it's been like this for 2 weeks! 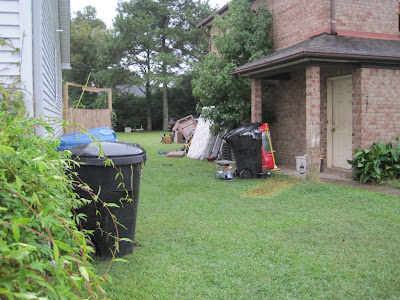 They piled their crap on my sideyard - and oh, look! - the neighborhood redneck children made a fort out of mattresses and shingled it, too! 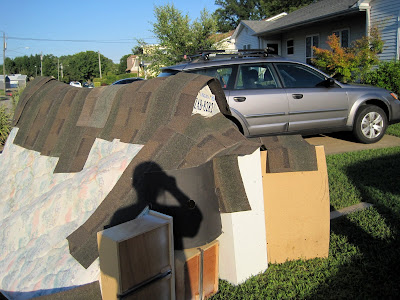 Let me reiterate: this is NOT my yard!
For those of you who saw this on facebook last week, it's STILL THERE!
I've called the city, nothing has been done yet, so now I'm thinking I'm going to have to get hubby's trailer out of the yard and haul their crap away myself. They have moved out so there is nobody there. I'm starting to wish we would have just gone in to debt up to our eyeballs and sprung for the wooden privacy fence around the yard instead of replacing the old fence with wire, ugh!
But anyway... today is a lovely day and I'm spending it weeding the fence line on the right side (junky neighbor's side) of the fence. It would never have gotten this bad except they don't mow and it all came through the wire fence. Check out the below photo and see how you can't even see my mulched fenceline bed? It's only taken me a half hour to do the first section in the pic, and thank goodness the stuff is rooted over on the other side of the fence so clearing it on my side is relatively easy, if not long and boring with a horrible view of junk all afternoon! I feel bad for letting it get this way on my side, but one person can only keep so much land pristine, and my priority has been the vegetable garden until now. I may break out the big guns and go next door and spray round-up along their fence. I'm taking a short break to get the "snakey-feeling" off of me and then it's back out for round 2. Every time I reach my hand into those weeds I get creeped out! 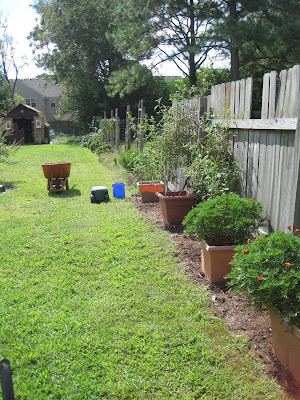 So today you should give thanks.... that you don't have my neighbors!
One bonus, a light harvest which enabled me to get an early start on my work outside! 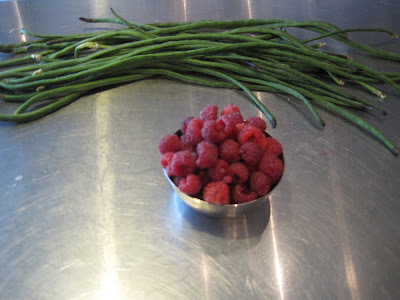 About an hour ago the kids started asking what's for dinner, "there's nothing to eat in here!" they whined....
Nothing to eat? Granted, it rained all day today and I am due for a store run and didn't feel like it today, but.... nothing to eat?
I'm from Minnesota, and there's never "nothing to eat"! Give me an empty kitchen and in 45 minutes you'll have HOTDISH!
To the uninformed, hotdish is anything on hand thrown into a casserole, put something else in there to keep things moist, LOL, and something else on top, voila, dinner! Among one of the MN favorites would be tater-tot hotdish, but I didn't have any of those - but I didn't have to resort to rocks, either... 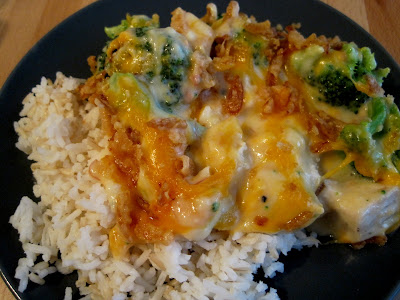 So what's in it tonight? Chicken, Cheese, Broccoli, a few biscuits, fried onions for crunch and all was thrown on top a bed of rice, although a true hotdish stands on its own without being thrown on top of anything (and especially not rice), my son has mastered the use of the rice cooker and is obsessed! 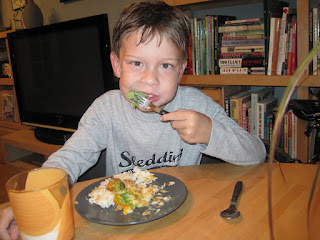 Tonight also marked another first for Loch, broccoli! I'm SO happy about that!
When it was all over, Loch said "hmmm, hotdish, huh?"
I promptly corrected him by stating the proper phrase "hotdish, eh?"
If you would like to know more about this curious Minnesotan phenomenon, click here!
Posted by Erin at 17:38 20 comments: