It's like I fell off the face of the earth the past week or so!  I know you are thinking I probably sent the kids away to some reform school and I'm at home eating chocolates and watching soap operas, but I've actually been canning, every day, all day...

the tomatoes were relentless! 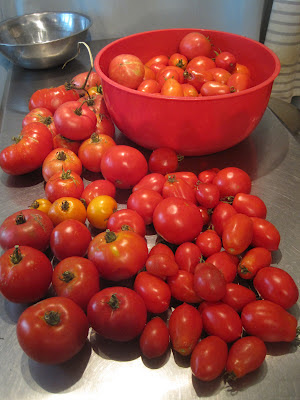 This has been the harvest weather pretty much every day - 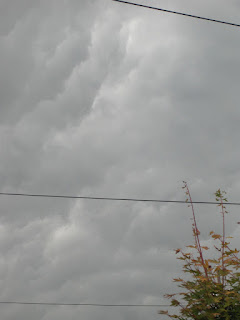 add to that high 90's and swarms of mosquitoes and I'm really ready for fall. 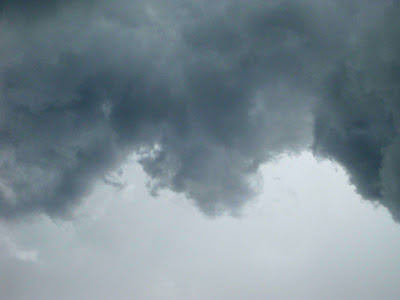 The mosquitoes are worse than usual, EEE (for those that don't know that's Eastern Equine Encephalitis) has hit our area really badly this year.  We always have reports of it here and there every year, but this year pretty much all the mosquito pools being sampled are testing positive and it's putting a lot of people in the hospital this season.  I'm covered in bites just from picking peppers this morning, and I even had pants on.  About 5-7 minutes outside is all a person can take, and everything is now so wet it just doesn't dry out before the lightning and thunder starts in again.

I'll spare you the many tomato harvest photos, just take the one above and repeat every 48 hours.  Below is this morning's pepper harvest though! 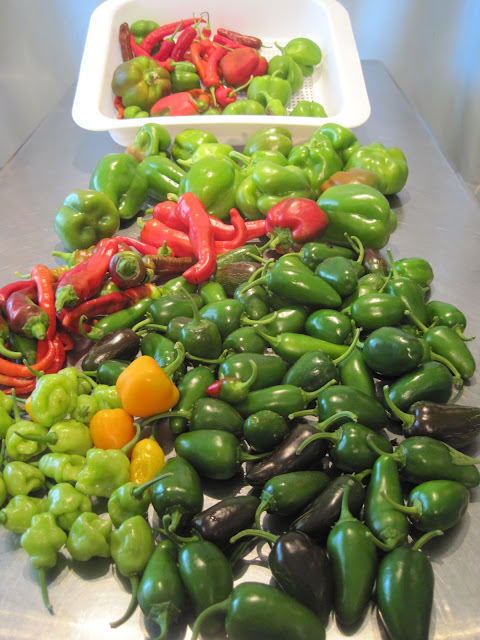 I would love to let all my bells get nice and red, but I'm finding that their quality is all downhill from green this year, so I'm picking them at green while they are still thick walled and unmarked.  They are much smaller than other years, also.  I will get enough into the freezer for the family for winter however so I can't complain.

The tomatoes are just about done.  I can honestly say I'm overjoyed about this, since I have plenty put away and the bugs and heat are intolerable now.  I will probably pull everything out there except my jalapeno plants soon.  I'm eager to try and replant beans soon since the heat limited my summer production and I only have about half of what I like to have put away for winter. 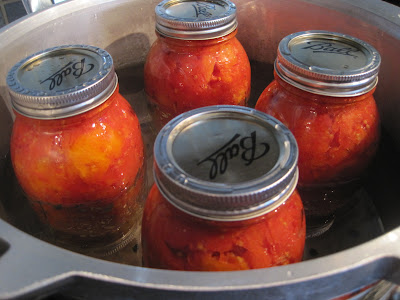 Another reason I've been off the map is that hubs & I were asked to speak in church last Sunday on disaster preparedness (him) & food preparedness/growing & canning (me).  That caught us a bit off guard and I spent the better part of last week preparing that and just stressing out in general. Turns out everything went fine and nobody was shooting spitballs or heckling us LOL, but the nerves of preparing to speak before a large group can wipe you out mentally for awhile, I think I'm ready to be an introvert for awhile and just crawl back into my own kitchen and hide out. (I can see my mom's eyes roll as she reads that, me - an introvert?!)

After being eaten alive this morning picking all these peppers I managed to get them all squirreled away into the freezer for my stir fry obsession.  The big bags in the front are my jalapeños, I'll use them for stuffed jalapeños later, I just didn't have the energy to deal with the canner today.  Note the small bags of pepper strips... I realized that the next deployment is approaching fast and so started freezing them in smaller portions since without hubby here we use much less - the kids aren't exactly tripping over themselves trying to get to the vegetables yet.   After about January, I won't be able to count on the hubs to help me eat all those peppers! 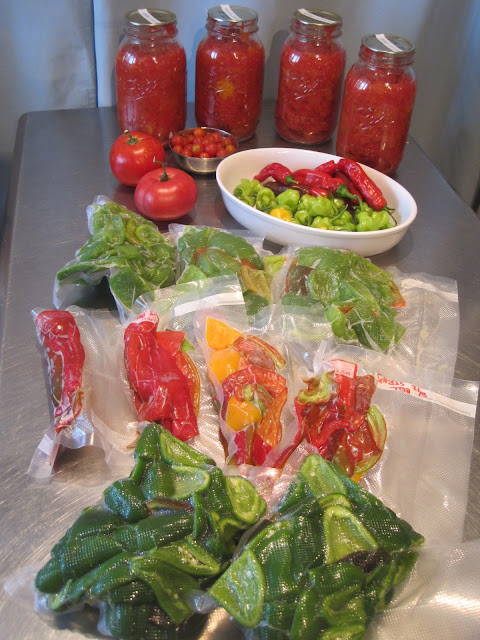 I don't want to sound ungrateful since I know so many aren't getting their normal harvests this year, but I'm ready for fall.  I haven't really had trouble getting a harvest, I'm just having a different harvest.  More tomatoes and less of everything else, strange.  What is definitely different is the way the garden looks - it's absolutely horrendous!  What a mess, but it's just too hot to care as long as it's giving me food this year.  It's not like I'm out there sipping lemonade and enjoying it this summer, more like donning long sleeves against the bugs and running out with a bucket and running back in as fast as i can.  Anyone else longing for fall?  I sure hope we are all able to get into that fall mode and bake, sew, read and do all the "extra" projects we have been wanting to - seems like the past winter and summer have really annoyed more than just me :)