I've spent the past several days pulling weeds... or shall we say this stuff! 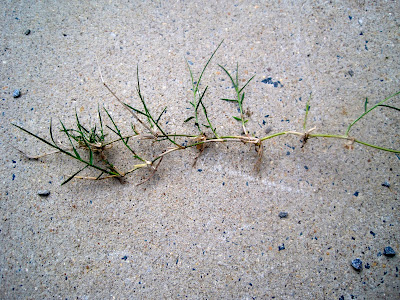 Yes, the evilness that the residents of southern states call a lawn!  I know some of you recognize this and are shuddering now thinking about when you are going to get out there and pull it!  For those lucky enough to not know what this is, it's Bermudagrass (fescue won't grow in the summer heat here).  I pulled one chain and it went on for about 5 feet, ugh!  This is the one thing I know of down here that would cause a person to find themselves in the herbicide aisle at the big box stores buying Roundup at an off hour (so nobody would see you)!  Or maybe in line at the pharmacy waiting to fill a prescription for Xanax?  Don't worry, I haven't given in... yet.  Actually, even Monsanto can't stop this stuff, I call it bamboo grass.  Instead doping up immediately after round 5 of the fight, I made the mistake of lying down on the couch for 20 minutes only to realize that during those 20 minutes my vertebrae apparently went on strike, it took me another 5 minutes to get up with much moaning and groaning - the kids are probably looking up numbers for the nearest senior care facility :)  Know what's insane?  People PAY for rolls of this so-called turf!

And who put that there? 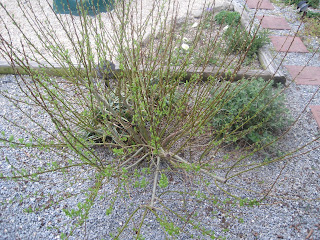 A willow decided to grow right in the middle of the traffic pattern!  I sat down and just stared at this for at least 5 minutes before deciding that hubby will deal with it later :)

Hmmmm..... what am I thinking about the below photo? 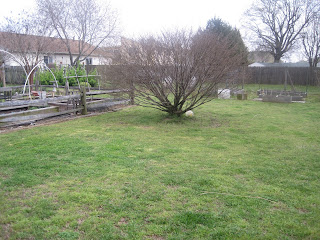 I have about 3 dozen tomatoes that need a home, and one big ol' Burning Bush taking up a really nice piece of real estate behind the fenced garden...  PERFECT for a separate tomato garden!  Except that's all Bermudagrass, #^%$)@#!! Maybe another action item for the hubs?  He worked 17 hours yesterday and got home at 10 pm, do you think my "list" might have something to do with it?  ")

Now for some good stuff -

Forsythia is in bloom, finally.  The wierd "reverse-effect" of our mild weather is that it's blooming really late - it normally blooms in my yard at the end of February when it's cold and icky out, I was starting to think it was dead! 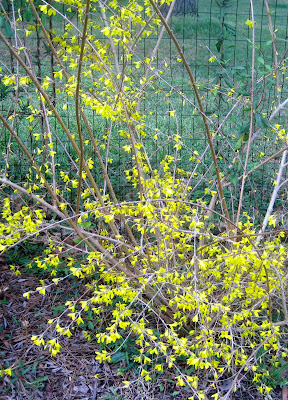 The bees are very busy already.  This is my "neighbor blinding" hedge of Carolina Jessamine.  So called because I grew it on a cattle panel underneath so when I sit on my front porch I don't have to look at the neighbor's unmowed lawn and junk pile LOL 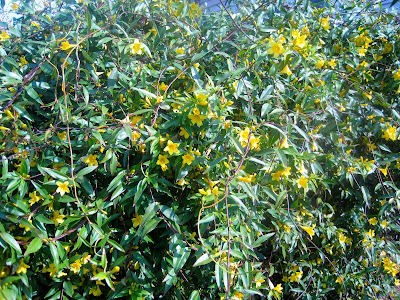 Tomatoes are ready to start hardening off whenever I can remember to do it. 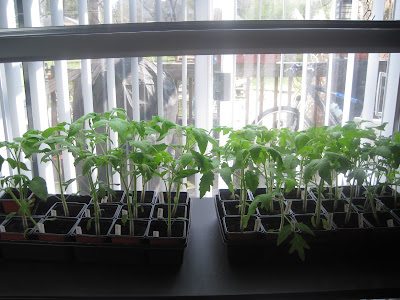 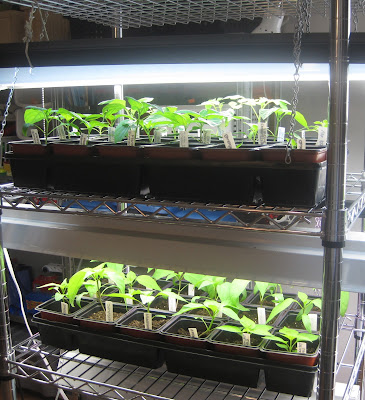 Basil is already spending the day out on the deck... 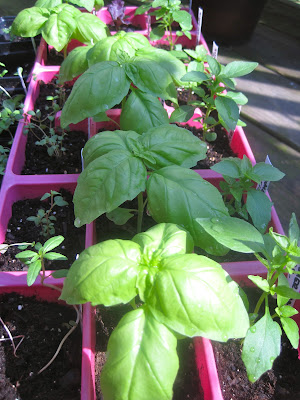 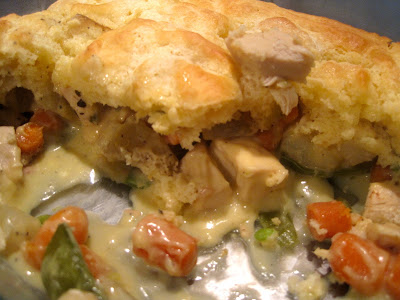 Chicken Pot Pie with a side of ibuprofen.