Two posts in one day? I couldn't resist! We went crabbing with friends today and had a great time, weather was great - never thought I would be able to say that in Virginia in mid-July! Here is some of the bounty from today. Friends stayed later than us and kept on catching so there is another cooler full besides this one!
Always gorgeous Chesapeake Bay Blue Crab 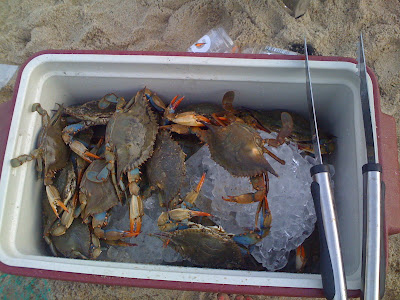 Finnegan's catch of the day 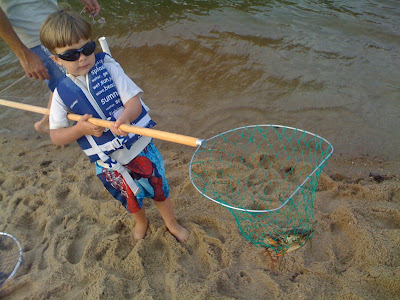 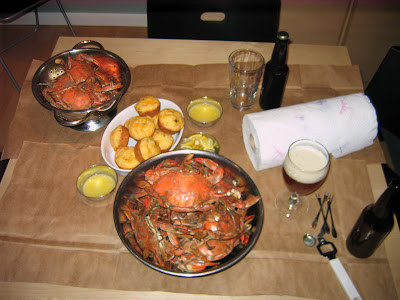 Back from our "Staycation"... 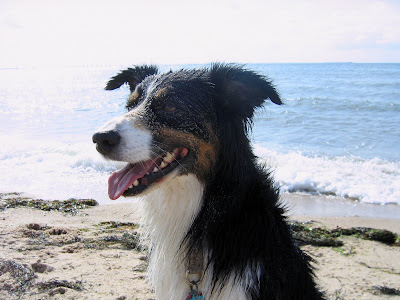 We actually started our staycation 2 days before Daddy was set to return from sea. It was a bit like the movie 'Office Space' where he announces that he doesn't really like working and "I don't think I'm going to go anymore"... Truthfully, I was over the single mom thing and couldn't wait for the reinforcement troops to sail in (literally) and give me a break! We have a state parks pass so I figured we would use it at our local state park and go to the beach. This was pretty cool since it's on the Chesapeake Bay and the kids can see Daddy's aircraft carrier, the USS Truman, go by bigger than life about 3 hours before he gets to the piers and we go to pick him up. In past years, this has become pretty routine, non-exciting stuff for me but now that the kids are a little older it is so fun to see them get excited and see things through their eyes. Of course, in their eyes the pirates Daddy is out hunting down are of the Blackbeard "aargh!" variety and the Carrier is just like "Top Gun", lol... I envy them and their un-jaded view of the world...oh, to be 5 again!
Anyway, me-the mom who hates to sit on the beach- actually bought a bunch of sand toys, umbrella, and a beach chair and headed out. Here's Finn at the State Park excited upon seeing the first of the small boats going by belonging to Daddy's battle group. 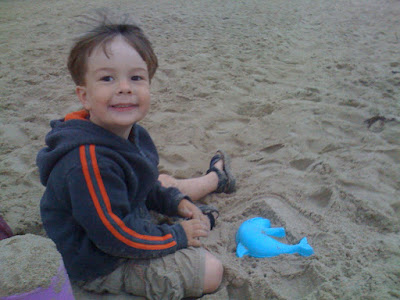 This is a pretty bad picture, but if you look in the left center of the horizon, you can see a Navy Destroyer, this was just one of the several smaller ships that precede the carrier coming in. (Lame, I didn't get a picture of the carrier - bad mom!) 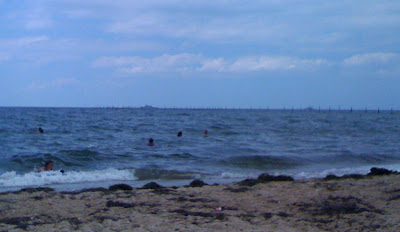 Not sure what's going on here. 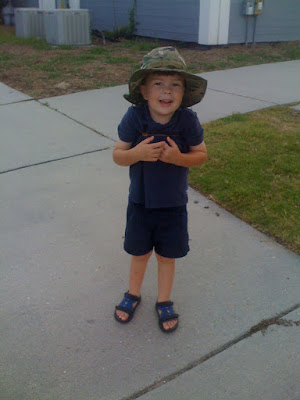 So it turns out the beach isn't so bad after all...I forgot how much cooler it is at the shore, and an umbrella helped! Now if the kids could just be older so I can trust them around the water I could actually read a book! I took one with me and laid it in the sand next to my chair to give myself "the illusion" of relaxing, but in reality was watching my kids in the surf like a hawk.
After Daddy got home, we had a great outdoor lunch at a restaurant on the water and gorged on crabcakes and grilled tuna sandwiches, Daddy also got his homecoming/late Father's Day gifts of a new Leatherman Skeletool and some tactical looking flashlight. My husband is a "geardo" so he was overjoyed, showing the kids "Look, this light is for night vision, etc, etc". You would think he would get tired of it all, but he loves his job and gets downright giddy when faced with a new tactical "toy"! After lunch, it was back to the beach where we remained off and on for the next 5 days, lol! Sailor/Husband also got some new surf fishing gear, so even after a day at the beach, we would head back out after dinner to fish. All this jived pretty well with the garden, since due to the "Minnesota Summer" we have been having my first tomatoes aren't even ripe yet, so my garden is kind of on autopilot right now until the fruits start to ripen, giving me some extra time. Even if we could afford a big vacation this year, we have no time since Sailor/Husband is leaving again in 2 weeks!
This pic shows what it's been like this summer so far: the Ziploc bag of my husband's toiletries never gets unpacked since he's always on his way out! It's like he's a visitor to his own home...I am waiting for him to start knocking on the door instead of opening it with his key, lol! 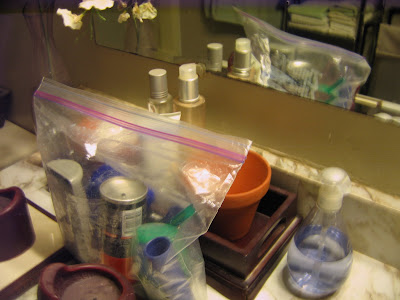 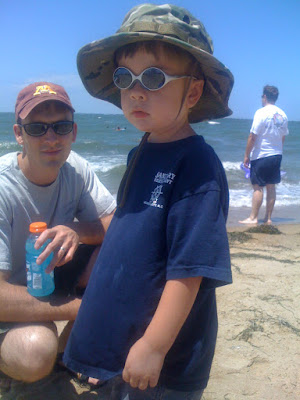 Finn and Loch digging for crabs 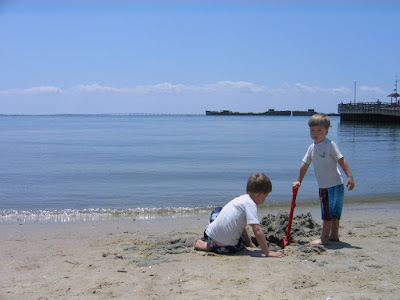 We headed to the beach on base to await fireworks for the 4th of July. Finn is digging to China, of couse. 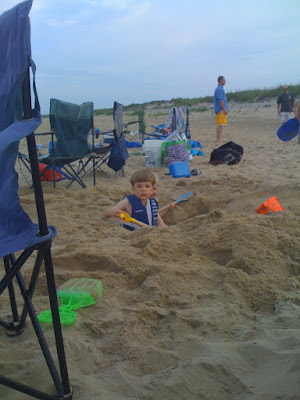 Not sure what waves Finnegan plans on surfing here, but he's got "the board carry" down pat! 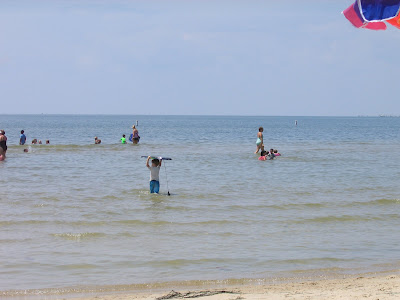 Here's Marley obsessing over her frisbee. She has become quite the disc dog since she came to live with us, but has never played in the wind on the beach in the sand...it was all a bit much for her and I thought she might have a nervous breakdown out there!
We are actually headed out crabbing today - then it's back to the garden! I find that I usually avoid the beach like the plague during tourist season, but am slowly rediscovering the good things about living here that I often take for granted. Plus, it tires the kids out! I am, however, getting really tired of sweeping sand up from everywhere, and the inside of the car looks like a sand dune! Oh, and before I go...here's a mental smell for you...my husband left a plastic bucket in the Outback with some rotting squid bait in it...I got in the car the next day, and....ugh! Yep, Daddy's back, alright!
Posted by Erin at 08:35 3 comments:

I am still here! Will be taking a few days off from blogging since Husband/Sailor/Farmer is home! His ship came in on Thursday and we have been fishing and going to the beach and just spending time together as a family. He leaves again in a few weeks so we have alot of activities planned for the next couple of days. Hope everyone had a great holiday weekend!
Posted by Erin at 13:03 4 comments: