It's a good thing I have kids, or nothing would get planted around here!  Yesterday, my son was perusing (ok, destroying) my new "Garden Manual" and he came across seed packets for pumpkins and wanted to know when they go into the ground.  "Well, I guess if we want pumpkins for Halloween we better get started!"  So it was off to start more seedlings even though truth be told, after the tomatoes and peppers, I don't want to see another seed flat for a good long while!  We planted a few of the classic orange jack-o-lanterns, a few white "Casper" pumpkins, birdhouse gourds, cucumbers and some flower seed.  If you ask Finn he will tell you "We planted pickles and birdhouses!"  Still no idea where the pumpkins will go.  I will probably plant them along the fence bed and just keep kicking the vines out of the yard each time I mow! 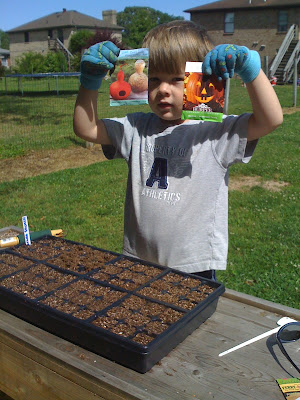 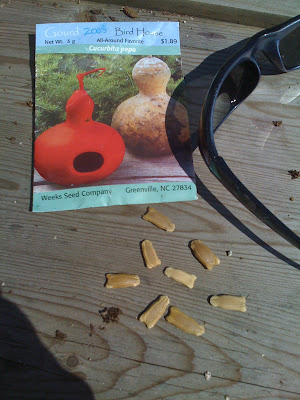 And what the hay is this???  Where do I get to sit???  Apparently the term "Garden Dogs" was lost on them on the way to the living room. 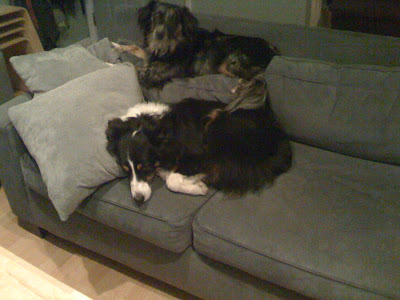 We will be bottling our first batch of homebrew this weekend, and I spent 2 hours last night in front of the TV scraping labels off recycled beer bottles, scrubbing and sanitizing.  Hope Sailor/Farmer appreciates it.  No doubt he will actually notice my efforts this time, since it involves beer :)
Posted by Erin at 08:15 2 comments:

It's been awhile since my last post! Not much in the way of big things going on right now, but just a few small projects here and there that have been on the back burner for awhile.
Sailor/Farmer returned and was welcomed with his own home brewing equipment as a Birthday/Early Father's Day gift. 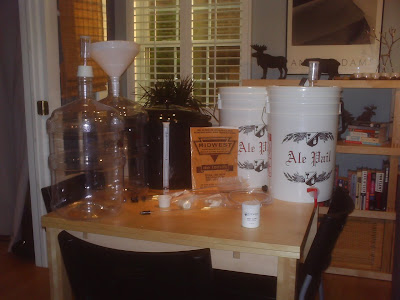 If he was only amused by my various sustainability projects previously, he is now paying full attention and loving it! Here he is cooking up his first batch of wort in the pouring rain last weekend. He and "N", his buddy tried to rig up some tarps on the pergola, but I think still got pretty wet that evening! 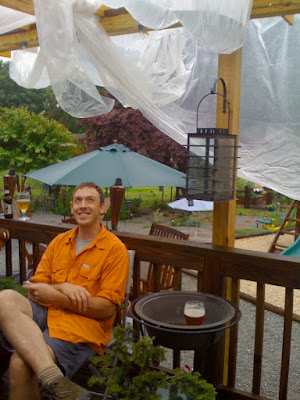 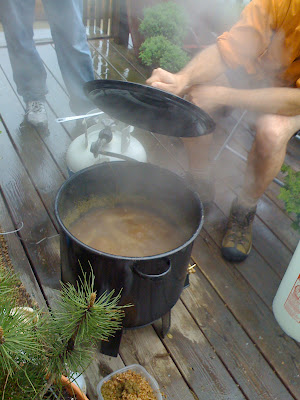 We didn't do any camping or other adventures this year on Memorial Day weekend, but managed to have a couple of good cookouts with friends and awesome weather.
It's not a party until the Army guys show up in the food... (you can tell I have boys!) 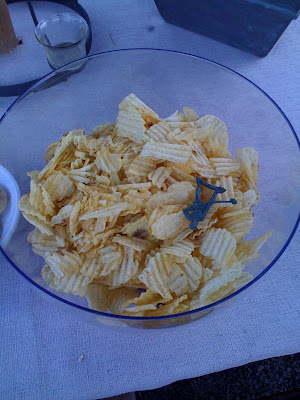 And the following night at L & N's house...Crab Boil! Crab, Shrimp, Clams, Potatoes, Corn, YUM! Food was incredible, kids had a blast, we will definitely be doing more of this the coming summer! 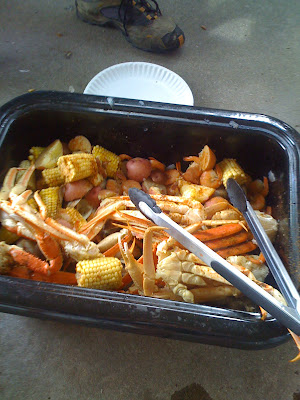 Here's Big "O" enjoying some of the cuisine that was obviously prepared in his honor. "Family BBQ means me too, right???!!!" 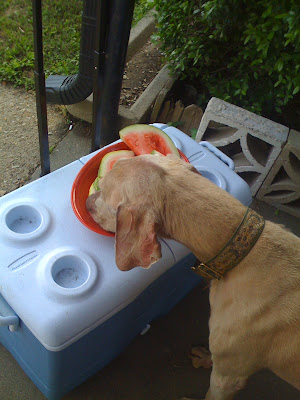 Thanks to the help of a friend and some adult beverages, my husband got motivated to finish replacing the fence around the yard, and we hope to build new gates the coming weekend. I got my garden shed all cleaned and organized and it is now officially all mine, as my husband has his own shed and is cleaning his out as well and will no longer have to sneak stuff into mine!
An update to my tomato situation: the problem was indeed bad compost I had delivered! I tested the soil and it showed virtually no nutrients...NONE! Apparently what we got was composted mulch of some sort, and not the rich compost I asked for! So, after amending the soil in those 3 beds, and a few emergency boosts in the form of a foliar spray of seaweed, we are now growing again! Tomatoes are not frozen anymore, and and the new growth is green! We will just be a few weeks behind everyone on the tomatoes! I am just thankful the mystery is solved and it wasn't mosaic virus or mutated Swine to Tomato Flu! Now I just hope the downpours and severe weather of the past month can stay away...(at least until hurricane season!)

Happy Memorial Day, all!  I plan on writing an update this evening (it's been awhile!), but I thought I would share this morning's excitement with you to tide you over until then :) 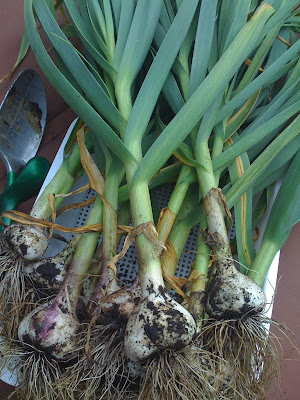 Grill Fired Pizzas, here we come!
Posted by Erin at 09:29 No comments: