I'm really not trying to be anti-social...

...but I can't help it, I'm drowning in peppers and haven't had time to blog!  The temps are now down to the mid-upper 80's which is divine compared to the past 6 weeks.  I had dreams of tackling the garden head-on yesterday and getting a whole lot of neglected chores done, but as I walked out into the pepper beds I realized I was going to be stuck in the kitchen all day despite the relatively cool temps outside.

Despite the horrifying state the tomato plants are in, they continue to ripen.  I think the saucing days are over now, but still getting enough to make stewed tomatoes or salsa. 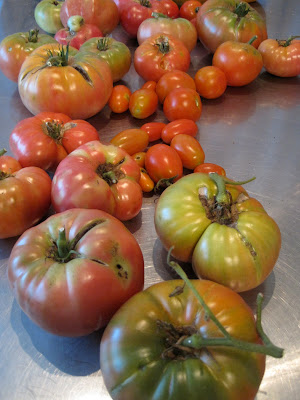 Upon seeing how many peppers were on these plants, I decided to pick them all and get rid of the plants for the year.  Below are the Sigaretta di bergamo peppers, I will not be growing these again since they are sweet peppers and are pretty to look at, but small and thin and really a pain to process for long term keeping, just too labor intensive for seeding and freezing. 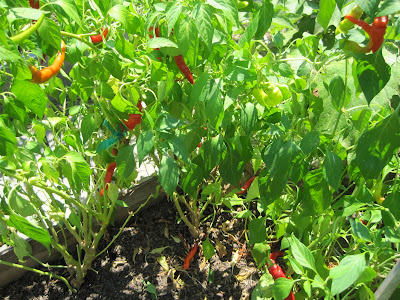 Below are the Sigaretta di bergamo and Pepperoncini plants that got tossed.  There were only a few new blooms and quite frankly, I have enough of them! 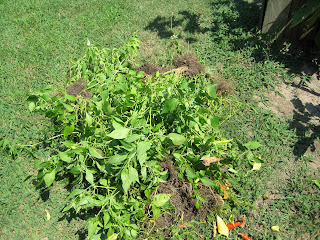 The end result - madness!  Several pounds of pepperoncini and sweet peppers came out of that little planter box - I had 2 of the Pepperoncini plants on the left side, and 3 of the sweet Sigaretta di bergamo plants on the right side.  You definitely don't need much space for peppers. 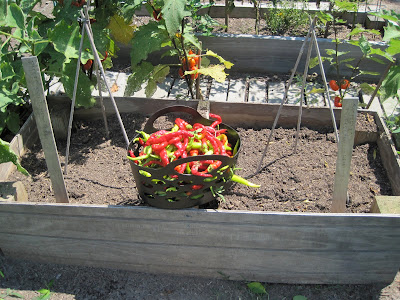 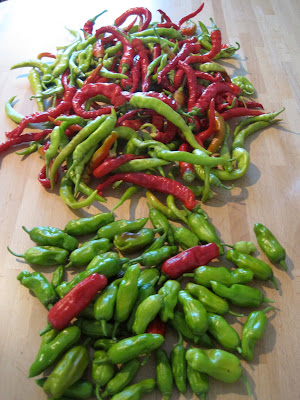 I still have other pepper plants that I will continue to let go until they decide to stop.  The center garden contains Poblanos that are just starting to ripen, my regular size Quadrato di Asti bell peppers, and jalapeno and fish hot peppers.  Actually, I'll probably rip out the fish hot peppers soon, as I already have several strings of them drying in the kitchen.
Below, clockwise from the top position:  Sigaretta di bergamo sweet, Poblano (Ancho), Quadrato di Asti Rosso bells, Jimmy Nardello Sweet Frying Pepper, Pepperoncini, Fish Hot pepper, Mini Stuffing bells. 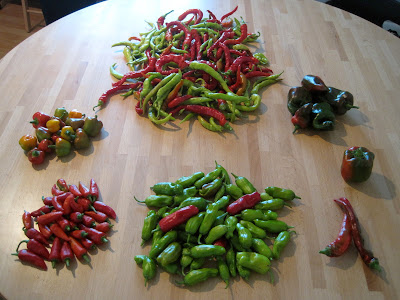 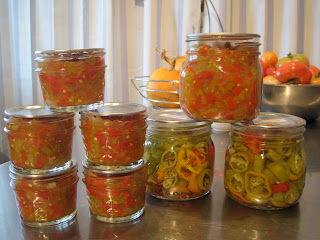 Pickled Pepperoncini Rings and Sweet Pepper & Onion Relish, bring on the Panini Sandwiches this winter!
Still haven't started in on the tomatoes on the counter, I'm a little upset that it appears that we have another day today of nice temps and I'll be stuck inside doing those as well as squeezing blood out of turnips - that is - paying bills :)  At least hubby is off today and he is outside right now getting started on some of the chores that have been neglected in the past 6 weeks of torture chamber temps.  I'm actually getting a bit excited to rip out the summer garden, but I need to keep on preserving what is still coming in.  I know I'll be glad I did come winter!
Posted by Erin at 12:21 17 comments:

...right when we needed it most!
A manageable harvest day - 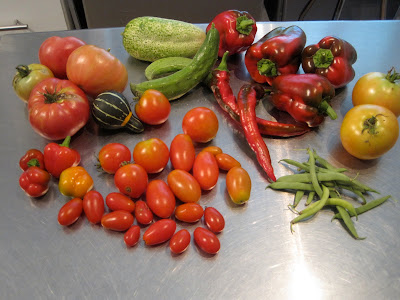 Tomatoes enjoyed on hamburgers while we still can - 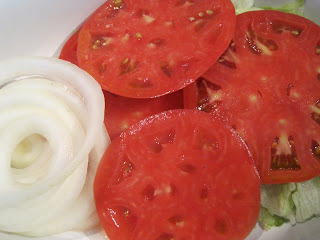 A very good mail day, thanks to Apple Pie Gal! - 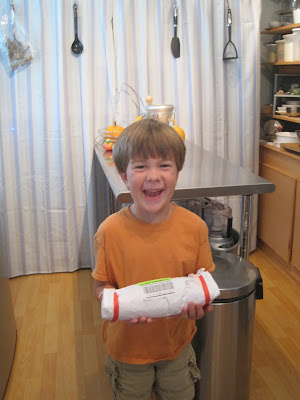 Finn is a huge fan of honey, so he got the honors of opening the package... 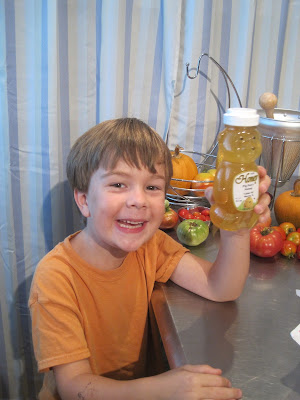 It wasn't even a minute before we were sampling spoonfuls of honey goodness!  Tell PigPen it's fantastic!  Thank you so much for the honey, and what timing - we needed a good spoonful of honey this week!
A follow-up to yesterday's post as well... there was a really neat "paddle-out" where surfers all lock hands out in the ocean and toss flowers into the surf to honor one of our fallen yesterday, check it out, make sure to click on "view all 3 photos", they are awesome!
Posted by Erin at 18:02 18 comments:

To follow the last post, another reason I haven't posted in a couple of days is emotional shock.  I'm sure all of you have heard about the RPG attack that took the lives of so many of our forces this past weekend.  It has hit our community here very hard, 22 of them are from right down the street from us, many wives and children were awakened by that dreaded knock on the door Saturday.  Most all of the Team members were husbands, fathers and sons, I know a couple of the Team members and their families and even though I am fully aware of the sacrifices they are willing to make and knowingly do so, it still comes as a shock.  If you met any of these Team guys the first word that comes to mind is indestructible - that's the feeling you get from them, they make you feel safe beyond any doubt, but I guess that's why they are so good at what they do.  Truth is, families have been destroyed, some are still waiting, and we are all anticipating the tears that will come tomorrow as we watch all those caskets being carried off the jet in Dover, DE.  I can't help but think of how terrible it will be for all their kids to start back to school in just a month and be around all their friends again talking excitedly about what they did this summer...
I don't like to get political very often because of the very fact that I am highly opinionated and I'll admit, biased, but maybe now eyes will open to how much we are not ready to pull troops out overseas.  For many of us military families, pulling out before the job is truly done to allow these countries to fall back in on themselves makes us feel that our sacrifices were in vain.  I know most of the opposition comes from a very good place in peoples' hearts in the basic need to have our members home, but they are doing a very important job, and they don't want to do it half-a$$ed.
Please keep these families all over the country that lost a part of themselves this weekend in your prayers, and if you aren't the praying type, send healing thoughts their way, I know they are appreciated. 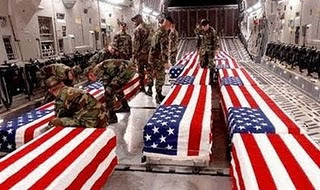 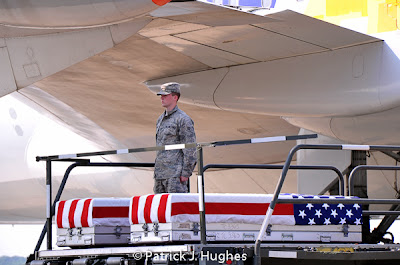 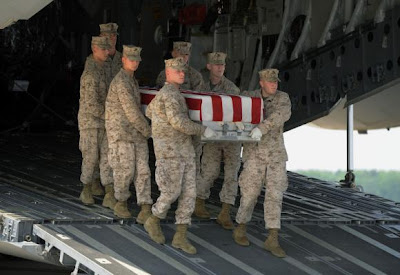 http://www.upi.com/
I hope everyone takes a minute to look at these photographs of dignified transfers, I was shocked to learn that many Americans never see these images.  From Dover, DE these heroes will be flown to their respective families all over the United States using regular airlines.  If you ever fly and are asked to remain in your seat "for a few extra minutes", please tell the impatient people complaining around you to be quiet, and look out the window... some amazing heroes were traveling with you, most passengers never know, although there are many pilots that are prior military and will be proud to announce their special added mission on the flight.  I only say this because I nearly knocked someone out for their ridiculous behavior in an airport while a flag draped casket was being wheeled out of a cargo bay of a plane.  I have hope though, that the majority of Americans are respectful and emotional about such things the way I am.
Posted by Erin at 19:00 26 comments:

The wildfires in the Great Dismal Swamp are burning again, leaving us with air conditions that don't allow any outdoor work, although with a heat index over 100 again I wouldn't be out anyways.  The smoke is unusually heavy today and feels like you've got a tree stump on your chest trying to breathe.  It's infiltrated the house and it smells like a campfire in here! 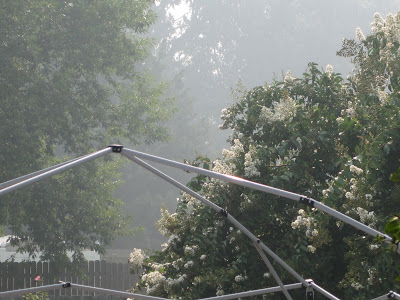 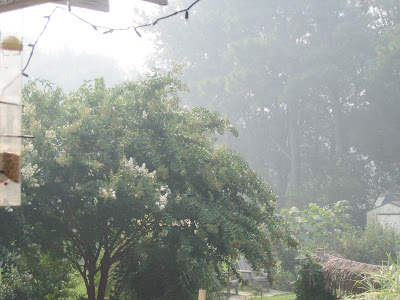 I'm neck deep in overhauling my entire computer system by erasing hard drives and installing software upgrades and all the fun that goes along with that.  I was tired of doing temporary fixes and figured I'd better just go ahead and devote the time to it now rather than risk waiting.  The good news is that it's a mac, so it's never really dead, it just needed some "me" time :)  I apologize if I missed any of your blogs, it looks like all my blogger reader settings migrated fine but I can never be sure without visiting every blog!  This is all incredibly interesting stuff, right?!
Another reason for quiet on my end the past few days deserves its own post...
Posted by Erin at 15:54 7 comments: 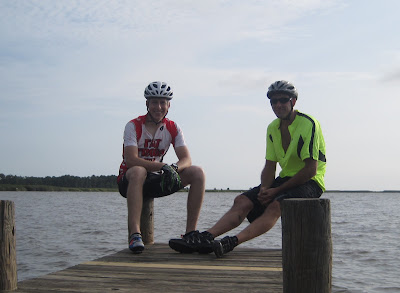 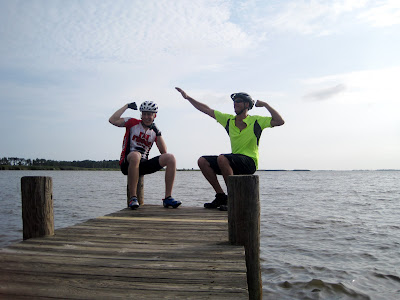 The mouse will work!
No?  That's not how that rhyme goes?  My kitchen says otherwise. 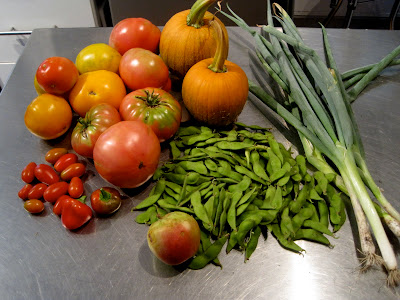 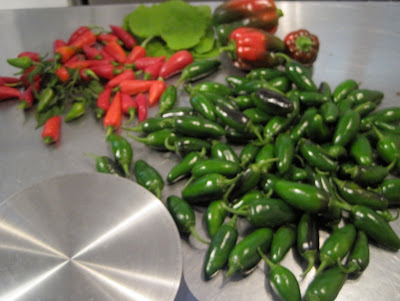 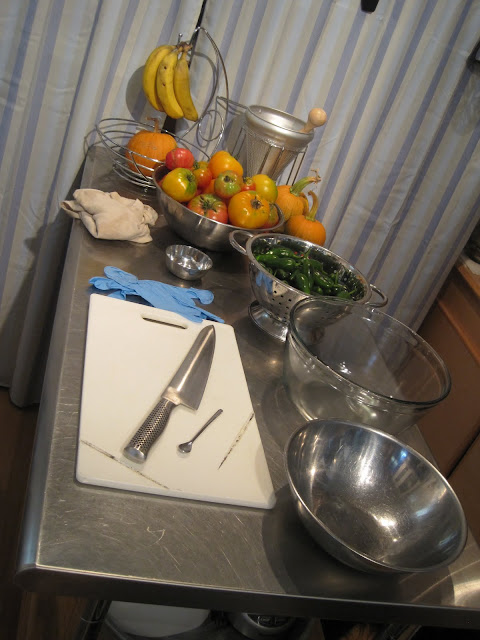 Maybe I should learn how to high pressure aerosol can this stuff LOL... nah, my neighborhood isn't that bad... 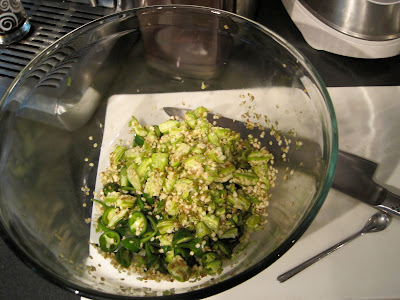 What was the weight limit on glass top ranges again?  I seem to have misplaced that manual, LOL 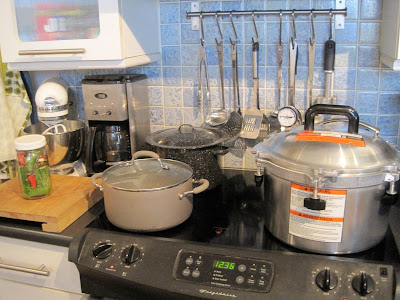 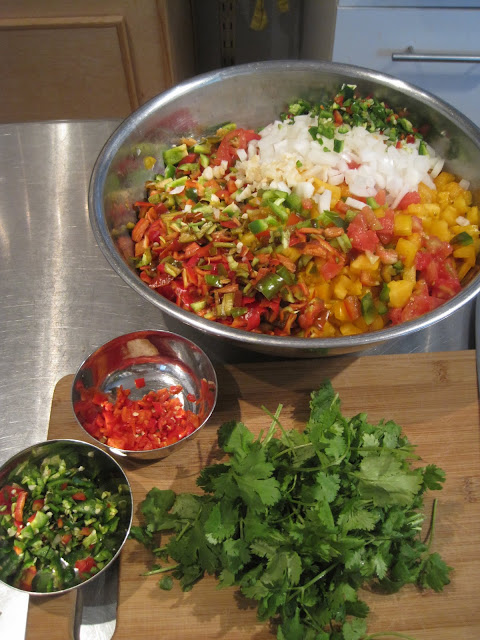 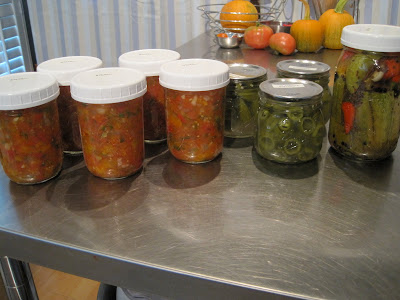