the heat, that is!  A photo posted on Facebook of the bank in my hometown in Minnesota was reading 103 today, what????!!  And it's coming our way next.  With temps forecasted from 95-100 the rest of the week and heat indices I don't even want to think about, it was time to make plans.  This girl don't garden in those temps, nuh-uh, no-way, nahgonnahappen.  I figure I'll get out there and water early at about 6 am, hit the auto-pilot switch on the way back in and close the door on it all.


Does anyone else get that gloomy doomsday feeling when the weather just won't seem to give anyone a break?  When it's nice here I have to watch the weather in other parts of the country and worry about fellow gardeners, and when it's bad here then I worry that my garden will go belly up or stress even more horrible things.  We live in a terrible area, a coastal tidal zone that is long overdue for the "big one"... maybe I should put a block on Jim Cantore and crew of The Weather Channel so I can relax!


Anyway, the plan for tomorrow?

Hopefully, sewing!  After I made Loch's shirt, hubby commented that he'd like one, too.  I think I'll make the brown fabric first since that's more likely to actually be worn LOL.  While the blue print has a lovely Jimmy Buffet vibe to it, slim hubby isn't rockin' the beer gut required to go with it to make it look authentic... maybe I'll get him some gold chains for Father's Day to complete the look... 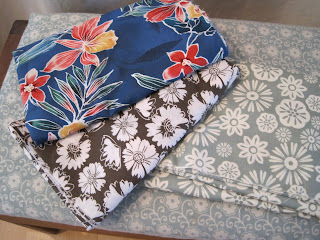 Random:
Dinner tonight was (I thought) a lovely mix of pasta, veggies, cheese & alfredo.  How could I go wrong with that combo, right?  Well the kids announced "ISH" as soon as they saw it headed for the oven door and said no way were they going to eat it. 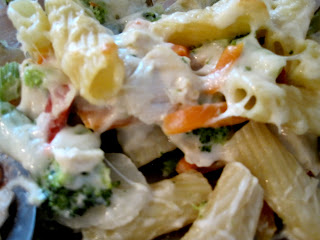 I heard everything from "what's that green stuff?" to "are those poisonous mushrooms?".  Yeah, busted - I'm feeding them poisonous mushrooms, where do they come up with this stuff?  I also made 2 pans of this for freezer meals, so they will be seeing it again!

So how did that pea pod make it into his mouth? 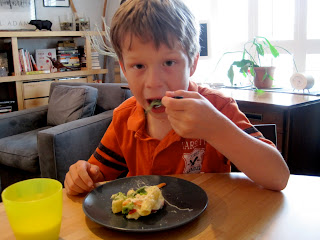 Finn didn't ask whether the strawberries were poisonous. 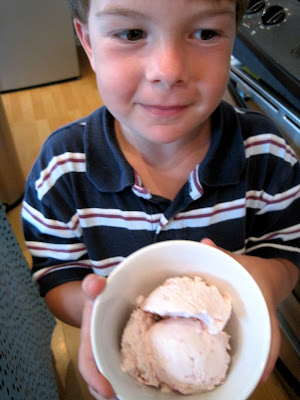 Question for the bread geeks:  what's the best way to cut bread for sandwiches?  I need to be able to make and freeze about 3 loaves a week for the kids' & hubby's lunches, but my bread knife is a piece of junk and before I buy another I want to know what y'all do.  I read today about using an electric knife but I had already cut the loaf.  I do have one, do any of you do it that way?  I'm thinking of getting a bread box guide but is it worth it or will I just get good after awhile? 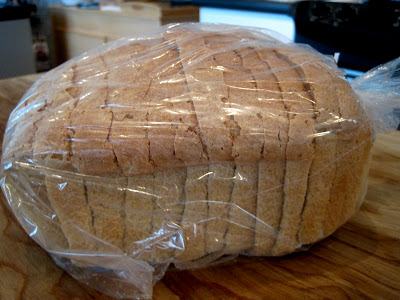 The first tomatoes are in!  They could have stood to be out until tomorrow but you can see below that something has already decided to peck at it, so in it came.  These are hybrids though, I don't expect any "real" tomatoes for some time yet. 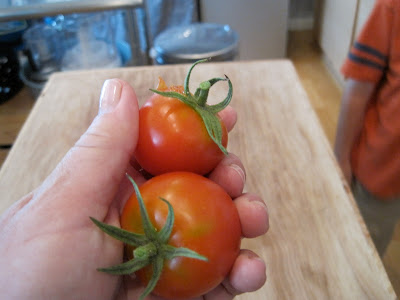 After dinner a package showed up for Loch.  Books!  Ribbit of The Corner Yard has a son that is remarkably like Loch personality/interest-wise and had some book duplicates that she kindly sent our way.  He even had a personal note written to Loch in there, Loch is so excited to have a long distance pal now and is at his desk writing a note to send back tomorrow.  He's so excited about the books I have a feeling I'm going to have to go in there repeatedly to confiscate flashlights for reading after lights out tonight.  The blogger family is so generous, thanks, Ribbit!  BTW, just as there are a few sewing enablers out there (you know who you are), Ribbit was my e-reader enabler LOL... 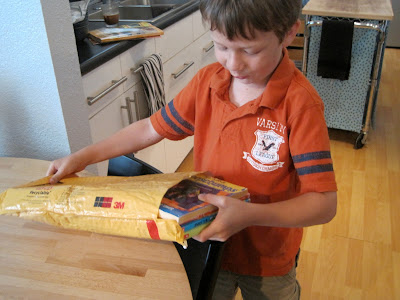