I can't quite believe the amount of work we (I) got done today! We headed outside this morning
and got both the border beds that run the length of each side of the fence weeded, Loch helped without complaining and thus has started earning some weekly cash! We are going to start a chart for this and see how it goes. Finn complained the entire time but that was pretty much expected, his brother is really the one more into the garden thing. I was able to dig some amendments into my tomatoes, tie them onto their cages and pinch off some suckers. Next came pruning of a couple of small trees and raspberry canes and tying them up. It started getting really dark then and we heard thunder in the distance so we picked up the yard and all our tools, then I remembered "Ladybird" Dove in the hanging basket... she has a thin bamboo roof covering the pergola above her but could still get wet - so I climbed up there and laid some shingles across giving her a "roof" to stay dry under! Yes, another "look at that crazy lady" for the neighbors moment watching my balance-beam walk on the balcony railing while crouching under the pergola and flinging shingles up in the air - what's next I'm sure they wonder! 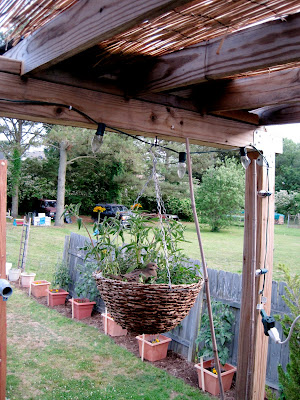 Ladybird in her new improved digs...
When we went back into the house after hearing the thunder, I was amazed to see it was only 12:55 p.m.! I didn't mind calling it a day for yardwork and waiting out the rain since we got so much done. Bored inside, I decided we'd take a trip to the big box store to get a lightbulb and cabinet hinge... yeah, that's how it always starts... 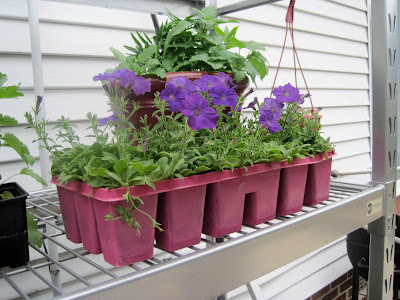 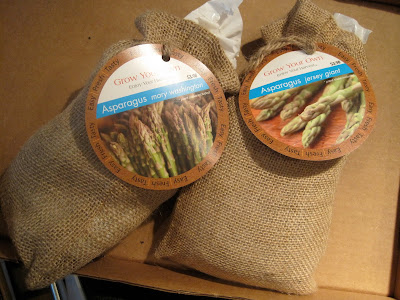 and then I really got suckered in - I'm finally going to do it... ASPARAGUS! It was 75% off so I figured what the hay, I have an area that would be great for it, so I'll give it a go. If they aren't viable I'm only out like 2 bucks! I kept saying that I didn't want to do an asparagus bed until my "forever house", but whatever! 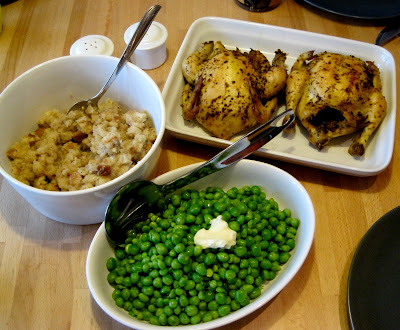 We have had the same exact dinner twice the past week! But my freezer is officially cleaned out of last fall's pea harvest and miscellaneous cornish hens that have been chillin' out in there too. The kids think they are fun, I just know they're inexpensive and easy!
Kids just went to bed and my legs ache so I'm headed to relax with a glass of wine and knit! Don't you just love that feeling of a productive day's work? I better savor it because I know tomorrow may be a completely different type of day. Hope you all had a great weekend!
Posted by Erin at 19:37