Have I said lately how much I LOVE my Subarus? I have owned a few since the early 90's and honestly, it's probably all I will ever drive. Here are the current residents in all their glory... 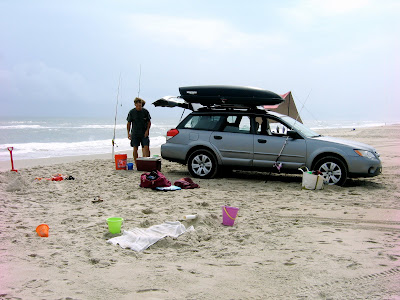 Mama's Subie
They run forever, have tons of room for us and the dogs, get incredible mileage for an SUV, and climb the dunes and traverse the snow right alongside pickup trucks. But my love today has nothing to do with the above. It has to do with my visit to the gas station today.
I roll up on the gas station, and egads!.... about 20 people in line at every pump. What's going on I wonder, is it the 70's again? I look, and nobody is in ANY of the left side pumps. So I roll up and ask the guy in the disgustingly big SUV across from me what's going on. "Winter Storm's a comin' in, everrbuddy's fixin' to get ready". Oh, that... keep forgetting I live in the South where they cancel the city at least 24 hours before the first anticipated flake. And if I forgot I lived in the South, I was sure reminded when he said "fixin' to get ready".... does that mean they were actually going to get ready, or just scope out the pumps while they thought about getting ready? Anyways, they are all staring at me in my SuperSubaru as I rolled up, gassed up, and rolled out of the left side pump while 20 cars were waiting on the other side, and they weren't nice stares, either. So, gas caps on the right side of the car.... that's Subaru Love. Subaru should have been filming a commercial during this. And as I drove away I couldn't help think of when people used to drive normal size cars and would just get real, real close to the pump and stretch the nozzle around... guess they kind lost out on that technique when they decided to drive the big 'ol SUV.
So that got me thinking, jeez, I better get fixin' to get ready for the impending "Winter Storm". 8-12 inches expected tonight through tomorrow, which is a big deal here, I guess. So my version of preparing involved me with son in tow hitting up Trader Joe's for some convenience foods and snacks, then heading to the craft store for some yarn, then to the used bookstore for a knitting book.
When we got home, I dragged this out of the shed, which I might add was all the way up in the loft where no one goes except mice. 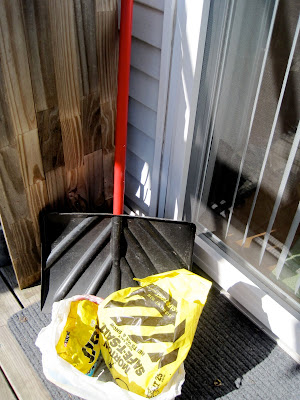 I suppose the sheer fact that I even own this stuff is strange enough here. As I put it on the deck, Finnegan says "what kind of shovel is that for?". Ha! "You'll find out tomorrow, Finn... it's a surprise"! And I didn't think I would get the chance to make my kids shovel snow. Heck, I even moved the Subarus out of the driveway in order for them to get the full effect. :)
Bring it on!
Posted by Erin at 17:12