This week has been a stressful one around here.  Tomatoes continue to pour in every couple days, that part is stress I handle well.  The other stress this past week came in the form of a dying heat pump, ugh.  Last Friday my tenant came home for lunch to find that her house was at about 88 degrees and climbing fast.  Did I mention that it was 106º that day?  Did the usual, system off - reset breakers - nothing.  It didn't surprise me that the system would go down in flames after a valiant 19 years in service, but why do these things have to happen on the hottest day of the year in a tenant's house?!  I called "the guy" and after 30 minutes in the 5000º attic he diagnosed a blown transformer in the air handler, $265.  After giving much thanks to God and Todd the HVAC guy, my tenant's A/C was back online, for now.  Soooo, I spent the rest of the day freaking out on how to pay for a new system since it's badly needed, I bit the bullet, prayed and applied for a loan from our bank.  A couple of seconds later I was approved and had the money in our account, I was in total shock LOL.  Although I hate it that we don't have a nice emergency savings built up thanks to me being a stay at home mom and our not-much-but-just-enough military paycheck, I am so grateful that we have been able to pay our bills on time and managed to hang on to our credit score so we could get a loan at a decent interest rate.  I could have just seen how long this fix would stick and watch it die again later and fix it, but the next deployment is coming up in the next year and that's no doubt when it would go down for good, and the system is very old, and it's our rental unit so we have to keep things going.  Spent the better part of this week getting estimates and I will be calling "our guy" back this morning and letting him know we are going with him.  I've been with this HVAC company for 19 years and they are really trustworthy, their service is awesome and they aren't pushy with recommending things we don't need (MSCO, Inc. for any local folks who want to know who to call!).  Notable - when I called our regular company on Friday, the HOTTEST day of the year, they fit me in and were here in 25 minutes, that speaks volumes to me.  One company came over here and it was like a used car dealer and a bad one at that!  I needed an HVAC system quoted and they did that and also quoted me $689 to fix a leaky tub they found under the house, really?  They must think I'm a moron, and what were they doing under my house anyways - no HVAC down there LOL.  They talked down to me a bit too which was annoying, I'm actually the one who makes these decisions around here, ha!  Anyway... my regular company was $400 higher but the unit was a nicer Trane unit which is what the old one was that ran forever, and gave me a few perks for being loyal such as throwing in a few years of the "seasonal checks" at no charge, and the sales guy was not a schmuck like the others haha.

Now we are trying to figure out how to afford a vacation home this summer, I think we are going to be able to if I get really creative, like eating lots of rice (just kidding!) so the first step was having hubs put in for leave.  He has over 70 days of leave on the books so in theory he should be able to, but the reason he has all those days is that he's in charge of his "shop"/workcenter and with upcoming inspections and preparing for deployment (a process called the workup cycle), they haven't been able to afford him being gone.  Keep your fingers crossed!

Back to the good kind of stress, tomatoes! 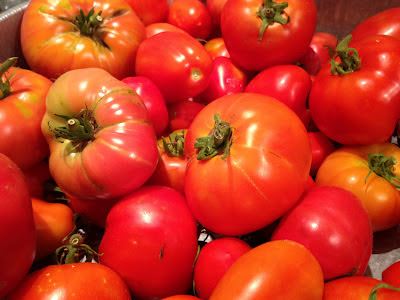 Not too shabby for a disease ridden year! 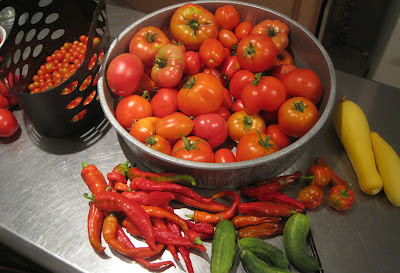 I didn't really want to be creating this kind of mess so early in the season, but after putting away salsa all last week, it's time to branch out. 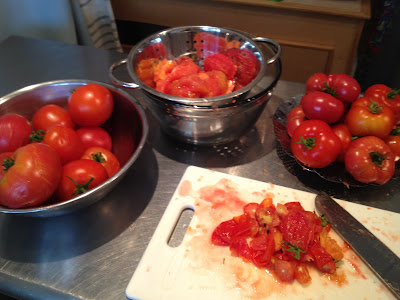 I refuse to get the canner out when temps are in the 100's so I made this batch into a big batch of fresh Brandywine Chile - the taste was amazing.  We had that for dinner and froze the rest.

Look what's going up only 2 miles from my house!  WooHoo!  There is a Trader Joe's right across the street that's been there for about 2 years now so we are going to have several really nice choices to shop at.  This is the only Whole Foods location within our area, the next one is 2 hours up the road so we're pretty stoked about having it open up. 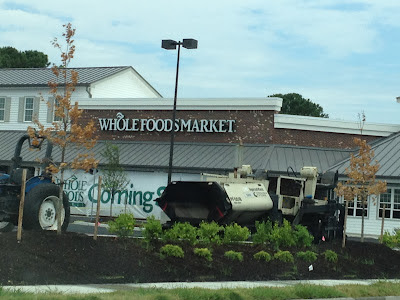 Doesn't this injury look fake? What do you think Loch did to his foot and leg?  I will reveal the answer in my next post :) 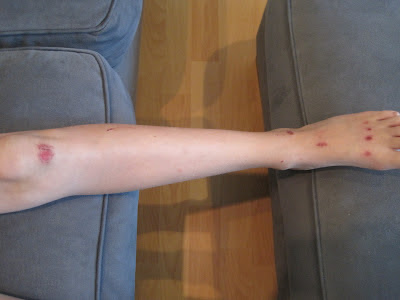 The heat has let up for now, we've been in a state of heavy downpours for 2 days and it's much cooler, only getting into the 80's now, hope it lasts for awhile.  The bug to throw stuff away and rearrange my house has bit me again so I'll be doing that for the next few days.  Every couple months I attempt to find more space, I'm convinced that there are many more square feet to be uncovered, if I'm only creative enough!

I have to catch up on my blog reading so no proofreading my post today, sorry if it's completely nonsensical!  :)
Posted by Erin at 09:21