The early seeds were started in flats on 2-23-12 this year, which is the same time I start things every year here.  I used to do some at the end of January also but found that the later February starts actually were much healthier and caught up and surpassed the early plants' growth in a matter of days, so I no longer get crazy in January! 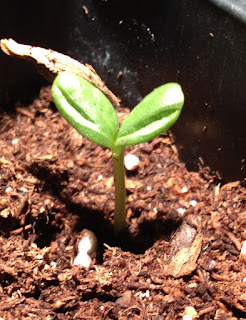 My favorite stage below- having personal experience with infertility and the numerous tests we always anxiously awaited results on - this point where the little cotyledon pops up is so exciting! 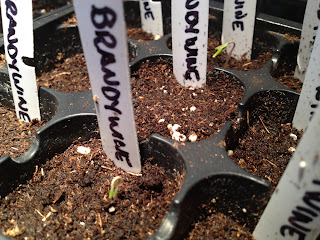 It has taken me many years to overcome the pangs of guilt as I "cull" the extras... 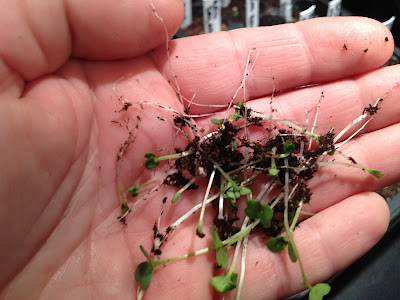 I can deal with it now, but I still can't bear to plant fewer seeds - maybe it's that infertility thing again that makes me hedge my bets and plant several in each cell!  Do you still have those feelings of guilt pulling out seedlings so that others have room to grow?

I have added several new varieties of tomatoes and peppers this year, and so far everything is going well.  The 2nd set of leaves is now appearing on many of them.  This was taken this morning - 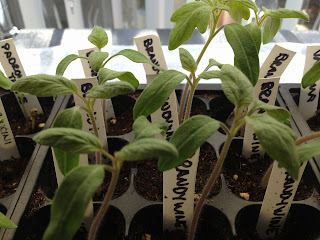 Egads... I'm terrible with those tiny herb seeds.  I never use tweezers or anything, just sprinkle liberally LOL!  It shows :) 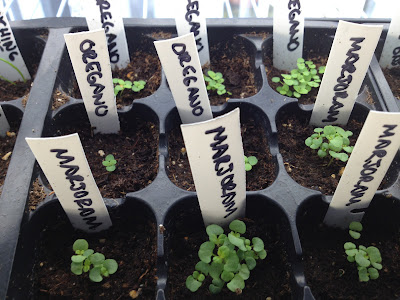 I mentioned this year that most all my new seeds came from Southern Exposure, I'm very excited to try some of these varieties that are historic varieties for our area & climate.  I am really hoping blight will leave us alone this year so I can accurately judge if the new tomato varieties really perform better in our Virginia climate.  With the exception of the 4th of July Hybrid tomato (I still have leftover seed), all of these peppers and tomatoes and most all herbs are non-GMO, organic, heirloom seed.


*notes from last year: Brandywine was still the #1 performer here in taste, quantity, and size, remains the bulk of my canning, apparently really likes humid coastal VA.  Amish Paste and Yellow Pear were disappointing in 2011.  Amish Paste were extremely susceptible to late blight but Pink Brandywine took all the blight in stride and kept producing 1.5 lb fruit in spite of it.  *Seed of Brandywine are also going on their 5th year in the "seed binder" with 100% germination - they were purchased from Baker Creek!

no special notes here, peppers do well in our hot, humid summers with no diseases or insect issues


Note: blech, why do I still grow this?  Oh yeah, they are pretty!  They also lure all the bad bugs away from the potatoes.

Herbs
Notes: No parsley seeds needed this year, it has self seeded over 100 plants in the garden and gravel perennial beds so far this spring.  Basil continues to be a problem here, it bolts very early so I am going to go ahead and add a hybrid this year called "Summerlong" that is supposed to keep going in the extreme heat.  I'll let you know...

Flowers/Ornamentals
Note:  If you are looking for a fantastic fall combo, cotton and the pumpkin on a stick look great together in a vase!  They are dried also so they last!

Others
**Also started many varieties of lettuces and scallions just for a few jump start plants - these are the same varieties as I listed last week that I also direct seeded outdoors.

***
I know you were rolling your eyes when you saw all those Jalapeños again... before you say it I'll tell you we have already used ALL the canned/pickled ones!  So although 50+ lbs looks and seems pretty ridiculous every summer, we need them all!  Remind me of that when I start complaining the end of July...